Predicting the big twists in the second season of "The Newsroom"

The first season of Aaron Sorkin's show exploited the news for fun. Why change it up now? 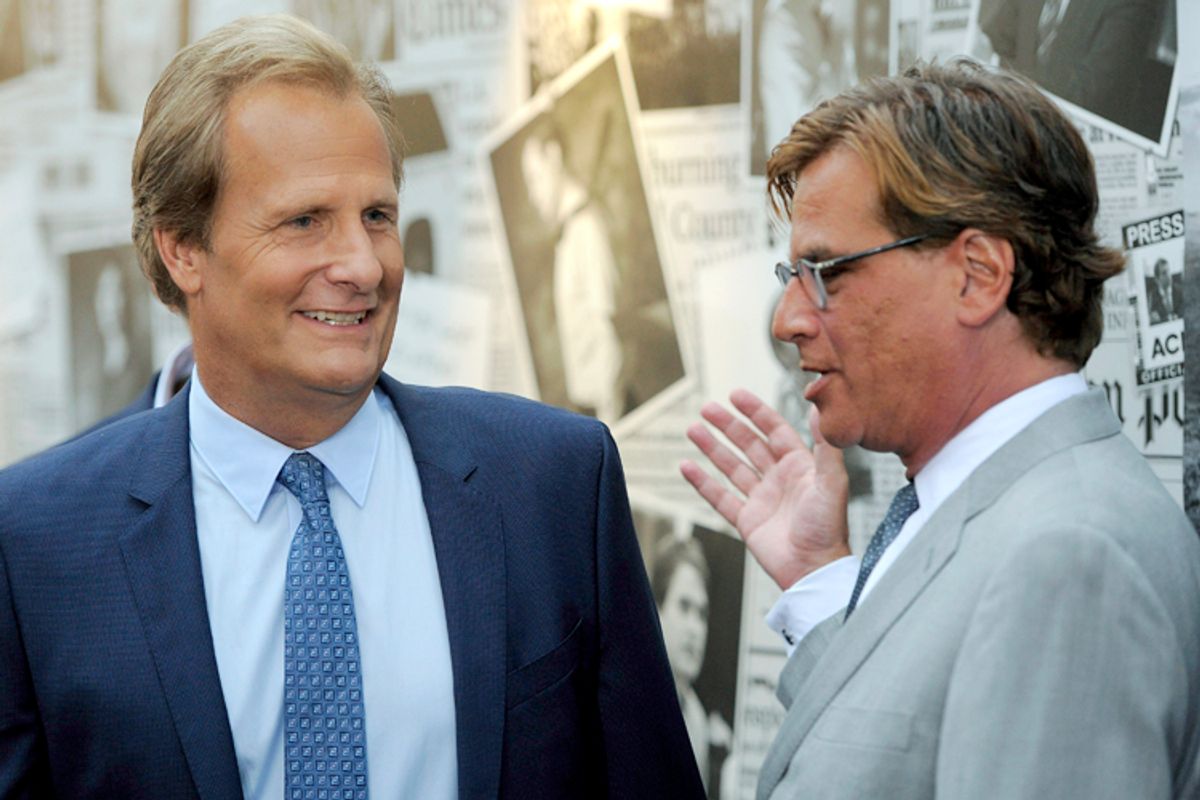 There's little the hate-watching crowd can possibly be more excited for than the premiere, this weekend, of the second season of "The Newsroom."

The series picked up where a flagging "Smash" left off in providing TV viewers a consistent subject of astonished laughter -- between Aaron Sorkin's reappropriation of real and really reported news events as opportunities for his fictional characters written in hindsight to behave in a morally unimpeachable manner, the depiction of women as dopier than the men, and that Bigfoot plotline, the HBO series was shocking in every way. By the time the "News Night" team got the story of the Gabrielle Giffords shooting right and grew as people as a result -- or maybe it was earlier, when a producer got confirmation from his college roommate that the BP oil spill was real, despite "no one else" covering the story -- viewers were tuning in to see just how deeply Sorkin was invested in his conception of his characters as fantasy heroes.

Sure, "The Newsroom" has reportedly been revamped for its second season. But to play Sorkin's contrafactual game -- what if it wasn't? We're picking up where season 1 ended, in the late summer of 2011, to imagine some plotlines for the bedraggled but resilient "News Night" team, led by fearless Great Man Will McAvoy.

In the steamy September of 2011, Will McAvoy (Jeff Daniels) travels to Syria with Maggie Jordan (Alison Pill), MacKenzie McHale (Emily Mortimer) and Don Keefer (Thomas Sadoski) to report live from the ground on the Syrian uprising, something that no one else is doing, or at least not as well. The trip brings out the best and the worst in the “News Night” team, who squabble over everything from who stole whose mascara (Maggie and MacKenzie) to the ethics of covering a war zone (Will and Don); the team is pitted against one another, as they manage not to encounter a single other American reporter in the streets of Damascus (they’re all reporting on the Kardashians, no doubt).

An emotional “News Night” broadcast, complete with an impassioned seven-minute monologue, turns the tide and Syria goes on to become the key issue in the 2012 presidential election. Meanwhile, back at home, Neal (Dev Patel) thinks coded messages are being sent to him in the pages of Time for Kids and dispatches all producers to help him untangle the mystery.

Episode 3: “As Fire When Thrown Into Water”

An earthquake hits Shawnee, Okla., causing significant damage, and Will devotes significant resources to covering the aftermath over the course of a week. The five-part series on what FEMA can do brings in record ratings, assuaging crotchety Reese Lansing (Chris Messina), who had previously only been willing to provide enough money to staff up a full newsroom of mysteriously deeply sourced reporters, vaguely incompetent female producers, and an anchor prone to controversial statements, but absolutely not a penny more.

Meanwhile, Will and MacKenzie get into a protracted debate over product placement during the news portions of the show: Citing the words of Edward R. Murrow, Walter Cronkite and Tim Russert, Will feels this is vulgar, but MacKenzie knows one of the potential sponsors is Zara and their blouses are so cute this season.

Episode 5: “Nothing Will Come of Nothing”

Will becomes convinced that what minimal coverage of Occupy Wall Street exists is at once too derisive toward the protesters and too inconsiderate of the great men against whom the Occupy Wall Street crowd protests are aimed; he decides to turn the eyes of ACN onto the actions at Zuccotti Park after a meeting where Charlie Skinner (Sam Waterston) shares with him inspiring quotes from “King Lear,” three Gilbert and Sullivan plays, “The American President,” the Beatitudes, “The West Wing,” a George Carlin routine about women, “Sports Night,” and every song off of “Pet Sounds.” Will prepares a rousing nine-minute monologue.

Coincidentally, MacKenzie’s book club leader (played by Rita Wilson) is a high-ranking member of Mayor Michael Bloomberg’s administration and, at an impromptu 4 p.m. meeting at Barneys, passes along the information of the late-night raid to MacKenzie. Despite the fact that MacKenzie trips on her brand-new high heels getting back to the office, she manages to pass along the information, and a raw special edition of “News Night” finally manages to get Americans invested in this undercovered story. Meanwhile, Sloane Sabbith (Olivia Munn) agonizes over the perfect gift for her crush -- and it's someone in the office!

Facebook goes public. Forty-seven minutes of this episode, critics will note, are just the Rashida Jones scenes of “The Social Network” with Will McAvoy playing Rashida Jones. It's an incendiary exclusive interview with Mark Zuckerberg (played by Nick Jonas). The other 13 minutes explain how Will landed the first TV interview with Zuckerberg before those laggards at the other cable networks (Neal, before coming to suspect she was the Loch Ness Monster, dated the daughter of Sheryl Sandberg, played by Catherine Keener; they’re still on good terms) and depict MacKenzie’s emotional crisis as she wonders if her lack of new Friendster requests mean she’s unpopular or not nice.

The nation is transfixed by the London Olympics -- what Will tries, and fails, to convince the Tom Daley-loving women on his staff is a meaningless celebration of the very worst humanity has to offer, now that it stars professional athletes instead of great men amateurs like Jim Thorpe. After McKayla Maroney makes her famous “not impressed” face on the podium after winning the silver medal and becomes a sensation online, Will reaches his breaking point and delivers, on-air, an impromptu but utterly convincing 13-minute monologue about the loss of sportsmanship and civility in American society. Barack Obama never poses with Maroney.

Meanwhile, the reporters refuse to rely on NBC’s feed like common lemmings and manage to learn through good old-fashioned reporting how the judges rule in the diving competition before they’re even finalized. (Don dated the Ukrainian judge, played by Marisa Tomei.) And MacKenzie tries to land an exclusive interview with Rafalca, not realizing the Romney family member and Olympic athlete is a horse and doesn’t speak English; when she realizes her mistake, she enlists Sloane’s services as a translator.

Episode 10 (season finale): “Things Are Seldom What They Seem”

Executive Leona Lansing (Jane Fonda) announces that she will be replacing “News Night” with an evening of YouTube-inspired beauty videos designed to appeal to young women in particular. Will has a dark night of the soul and is contemplating his options -- quit the business altogether? But the business needs someone who can cut through the insipid chatter of blogs! -- when his best friend and college roommate (played by Christian Slater) calls and asks to meet for a steak. This friend had been brought as a guest to a Republican fundraiser months before and just can’t hold it in any longer; he shares with Will a video he shot of Mitt Romney deriding 47 percent of the voting public. This video was shot on a sophisticated digital camera and is better-quality than the one eventually obtained by Mother Jones, not that it matters, because “News Night” got the scoop.

MacKenzie stands at the door of a restaurant, trying to use an empty soup can to hear what’s going on inside; when she gets bored, she steals a pie off the restaurant’s windowsill, where it’s been cooling, but she trips and it gets all over her face and she’s attacked by bees. Back at ACN, after a galvanizing 27-minute monologue by Will, Romney quits the race and devotes the rest of his life to charitable works for the poor. Paul Ryan loses the election in a landslide. Leona decides to keep the show on air -- and, as the camera pans out, Will gets a hot tip from his mother (played by Jessica Walter), months in advance, about how the Supreme Court will rule on same-sex marriage...