What can't this man do, or at least what won't people pay him to claim to do? 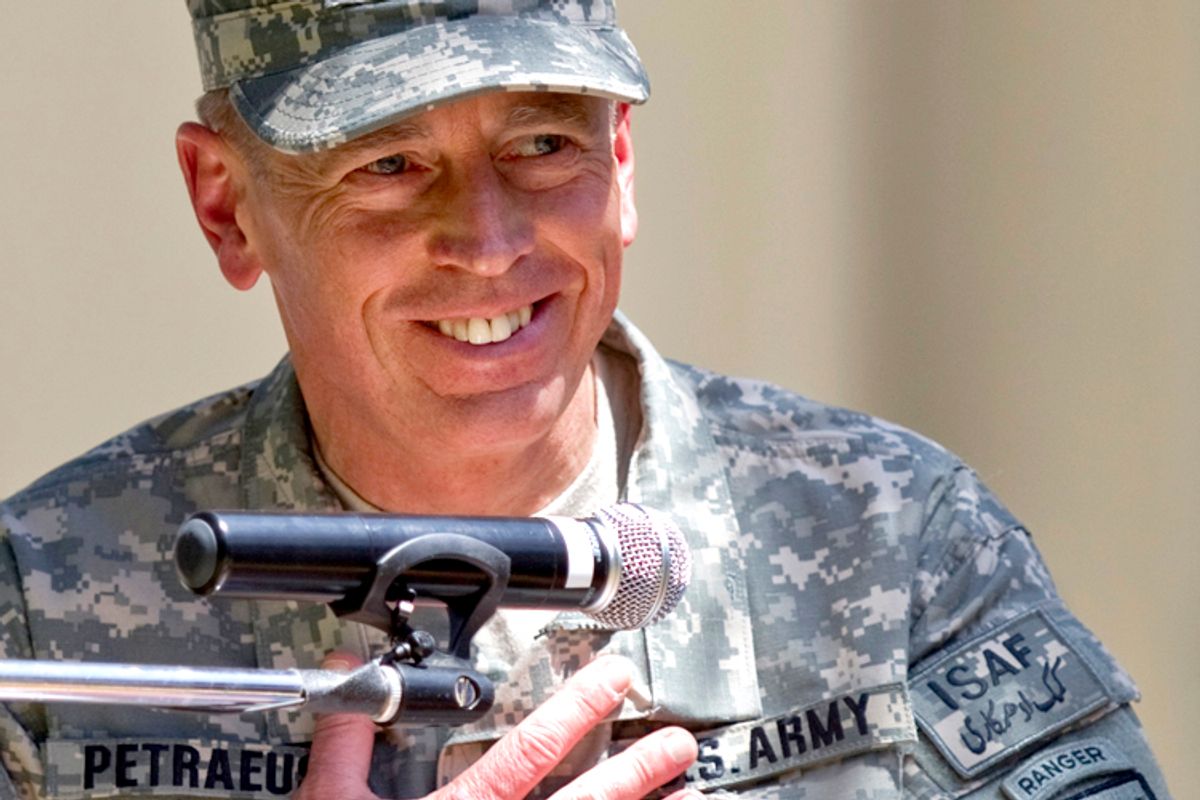 In Mark Leibovich's "This Town," we learn that a mere week after his adultery scandal broke, Gen. Petraeus had retained the services of Washington "super-lawyer" Robert Barnett. Barnett's job, which he does quite well, according to examples given throughout Leibovich's book, is to get his clients -- high-status people from the government or the press -- lucrative book deals and TV gigs and the sorts of silly made-up jobs and board memberships that these people all collect. And it was not long before Petraeus was chairman of a private equity firm's new "Global Institute," with well-compensated teaching gigs on both coasts.

The job in New York, at CUNY, has received the most attention lately. The perpetually cash-strapped university will be paying Petraeus $150,000, to teach two short seminars, with the "assistance" of researchers and graduate students. Needless to say, most CUNY instructors are paid considerably less, to do more work, with less (or more often no) assistance. This has become a minor scandal, with at least one New York City mayoral candidate (the best available one, Bill de Blasio) calling on CUNY to cancel the arrangement. So what is CUNY getting for its $150,000? It is getting a military counterinsurgency "expert" who wishes to ... talk about "life sciences," apparently.

Petraeus' course will be called "Are We on the Threshold of the North American Decade" and here, courtesy of Corey Robin, is the actual course description:

In this interdisciplinary seminar, students will examine in depth and then synthesize the history and trends in diverse public policy topics with a view towards recommendations for America’s leadership role in the emerging global economy.

I know Barnett is doing his best for his client here, but has he really figured out all the ways Petraeus could monetize his influence? (Or "share his expertise" or however he justifies it to himself, if he bothers to?) There are a million different jobs David Petraeus could pretend to do for a lot of money.

Major institutions of American life with money to burn, David Petraeus is waiting for your call! Why not hire the general as your new editorial cartoonist, or commissioner of the New York City public schools? Maybe he could do your taxes, if you pay him six figures and give him some help? He could design your next home, library or hospital, because how hard could architecture be for the man who won both of our most recent wars?

Why, just look at this press release that just came over the transom:

West Burlington, IA -- (July 12, 2013). David Petraeus, the highly decorated four-star general who commanded coalition forces during the “surge” in Iraq and later in Afghanistan, and who subsequently served as Director of the Central Intelligence Agency, has been named Visiting Bus Driver for route 1486 of Burlington Trailways' intercity bus service. Dr. Petraeus will take up to 48 carefully selected passengers from historic Cedar Rapids, Iowa, to picturesque Dubuque, Iowa, on August 24, 2013.

"Burlington Trailways is deeply honored to welcome Dr. Petraeus to route 1486, which has always been one of the most vital and forward-thinking in our entire Iowa network," said Burlington Trailways President Ron Moore. "Dr. Petraeus will give our passengers an invaluable perspective on his many areas of expertise, from world affairs, advancements in luxury coach fuel efficiency, life sciences, and the history of many of the farms the bus will pass along the way. Of course, all of his insights will come in the form of written material available for purchase, as speaking to the passengers directly would be a violation of company policy, and also this is a passenger bus route, not a tour. We couldn't be more excited."

On accepting the appointment, Dr. Petraeus said, "I couldn't be more excited. I've always hoped I could someday work with bus passengers in central and eastern Iowa, especially because my grandparents themselves often rode buses. Iowa bus passengers are some of the most gifted and clean in the entire country, and with the challenges the nation as a whole faces in the coming decade, from climate change to increased global competition, it is impressive that these passengers already understand the importance of green alternatives to simply driving the 73 miles in your own car or truck. I've always said that there's no better place to study forward-thinking solutions to momentous world problems than on a bus."

While staff provided by the Burlington Trailways will assist Dr. Petraeus by performing the steering, braking and accelerating, Dr Petraeus' unmatched leadership skills and commitment to public service will be instrumental in ensuring that the bus arrives in Dubuque not just on time but also more prepared than ever to meet the challenges of 21st century intercity transit. Dr. Petraeus, who earned a B.S. with honors from the United States Military Academy and M.P.A. and Ph.D. degrees from Princeton University’s Woodrow Wilson School of Public and International Affairs, will monitor the bus' progress, and provide pivotal route, traffic and international development advice from a separate vehicle.