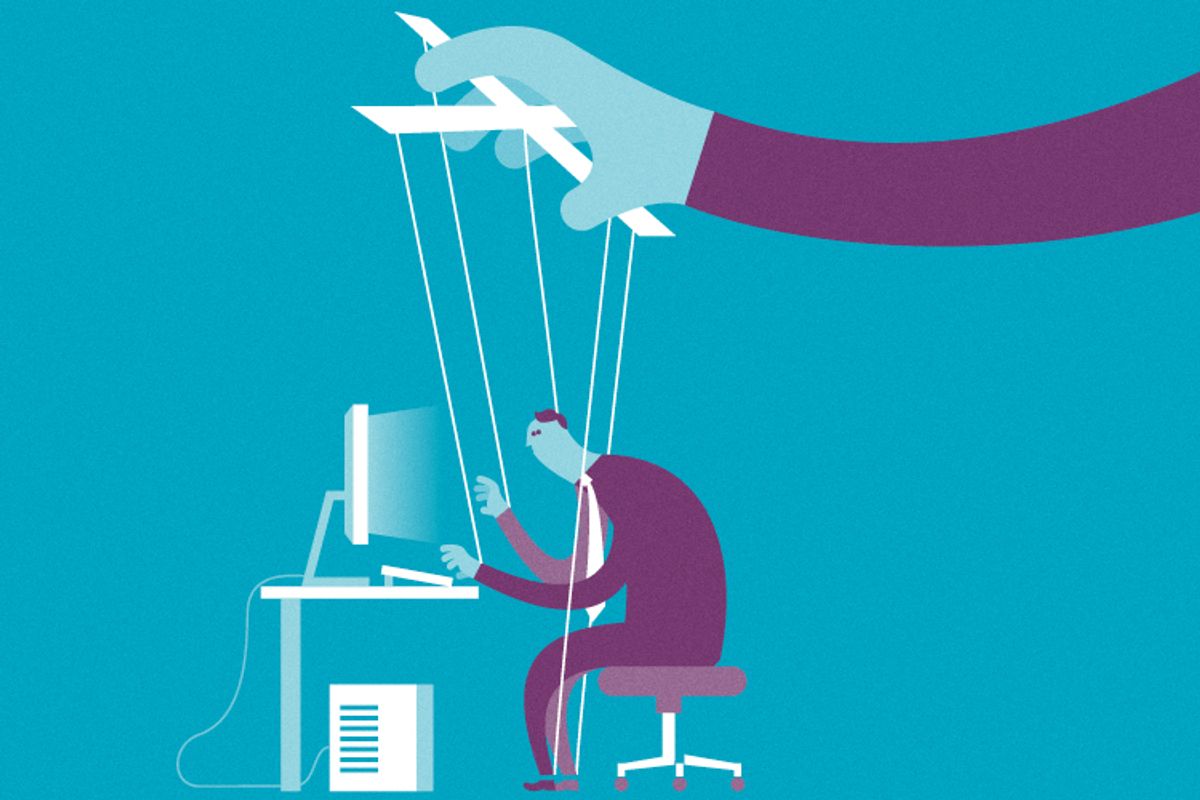 An executive at an up-and-coming start-up settles into a cross-country flight. After the unthinkable torture of the ban on electronic devices ends, she pulls out her tablet, connects to Wi-Fi, and reviews her to-do list: Cancel cable TV service. Make dinner reservations at that annoying restaurant that doesn't use Open Table. Research the entrance requirements for elite Brooklyn preschools. The prospect is disheartening, especially 35,000 feet high in the sky. A lot of hassle, a lot of time-wasting minutes spent on hold, a lot of unnecessary roadblocks preventing her from focusing her concentration on more important things, like getting her world-changing start-up up and running.

But no worries! She's signed up for the $45-a-month plan at Fancy Hands, the online clearinghouse for virtual assistants, and that entitles her to outsource 15 discrete tasks every month -- anything and everything that can be taken care of by someone with access to a computer and a phone. So she logs in and posts her tasks. By the time she lands, it's all been taken care of by Fancy Hands' always-on-call army of contractors. Another state-of-the-art lesson in getting things done via the Internet economy.

Fancy Hands -- "Do What You Love -- We'll Do The Rest" -- is just one entrant in a growing cohort of companies that are outsourcing all kinds of humdrum work to the "cloud." The biggest names -- Task Rabbit and Amazon's Mechanical Turk -- have offered similar services for years. The market niche seems sure to boom further, propelled by a generation completely comfortable with turning to the smartphone as the first place to look for work.

The best cloud labor start-ups have received plenty of laudatory press coverage and rave reviews from users. In the specific case of Fancy Hands, one can instinctively understand the appeal. Who wouldn't want their own executive assistant on hand 24/7 to deal with the drudgery that clogs up daily life. You know you would love to "automate all the boring parts of your life." Fancy Hands democratizes access to what previously was only available to the very well off.

That's progress -- for the consumer of the service. But one thing you discover when reading reviews of these services is that the vast majority of commentary focuses primarily on the users. Far less discussion is devoted to the producers, to the phenomenon of a new and growing class of drudges -- the peons now making your phone calls and conducting your Google searches and washing your cars and toilets. These are not your father's jobs. The typical Task Rabbit or Fancy Hands employee is invariably an independent contractor eligible for no benefits, quite often working for rates well below minimum wage, and able to exert zero leverage to resist employer abuse.

There are no paid holidays, no sick days and no health benefits in this new "distributed workforce." There are no unions in the world of "cloud labor," a class of worker that fits neatly into what some academics have dubbed the "precariat." Nor is it hard to understand why coverage of services like Fancy Hands rarely considers such things as working conditions, because, increasingly, the workers are invisible. They're just another computer process working behind the scenes, albeit powered by coffee, rather than electricity.

Is this the future of work? When Silicon Valley visionaries and start-up hypesters talk about "changing the world for the better," is this what they mean? A growing class of invisible workers, distributed across the world like so many packet-switched bytes of information? In a society increasingly stratified between the haves and the have-nots, where does this new proletariat fit in?

In George Packer's epic New Yorker appraisal of Silicon Valley, he describes an epiphany he experienced when contemplating the "disruptive innovations" that keep pouring out of the Internet economy. "It suddenly occurred to me," wrote Packer, "that the hottest tech start-ups are solving all the problems of being twenty years old, with cash on hand, because that’s who thinks them up."

Fancy Hands is a close-to-perfect example of Packer's thesis. Founder Ted Roden figured out a way to "disrupt" the annoyance of being on hold. And he did it because a few years ago he had a new baby, a book deal and a full-time job. He was overbooked: "Rather than make a simple phone call to take my wife out to dinner," he told Fast Company, "I built an elaborate platform." For the first six months, he was the only user.

But Packer's underlying point was that the success of tech start-up geeks at scratching their own itch, while possibly "changing the world" for the better for people like themselves, did not necessarily address the problems challenging society at large -- widening inequality, for example, or outright poverty. For those with the disposable income to spare, Fancy Hands is awesome. But for those people who belong to the slice of the work force in which wage growth has been imperceptible for decades, it's not clear at all that the super-efficient, super-cost-effective distribution of work through the cloud  is applause-worthy. This is not like Henry Ford paying all his workers $5 a day so they could afford to purchase Ford cars. This is the opposite, the exploitation of new technology that enables employers to pay the least amount possible to get a job done by tapping an unlimited pool of labor willing to work for almost nothing.

Fancy Hands and its brethren certainly don't deserve to be classified anywhere near the sweatshop owners in Bangladesh who lock the exit doors and scrimp on building safety. If you spend any time at all at the various forums and bulletin boards where people discuss and compare working-at-home employment options, it's clear that for many people, virtual assistant-type jobs fit a useful niche. Time schedules are flexible, you can work as many or as few hours as you want, and if you demonstrate competence you can often move up the ladder of tasks to work that pays better than minimum wage. For a generation weaned on the Internet and smartphones, it probably feels perfectly natural to be logging online to grab the odd job here and there. In a provocative piece for Businessweek published last fall, writer Brad Stone spent a week working odd jobs through Task Rabbit and concluded that such services might even be construed as "a uniquely American safety net for the unemployed or underemployed, who will now have somewhere to turn when they need to make money."

“If you weren’t out washing that car you’d probably be sitting at home twiddling your thumbs,” [Stone quotes Hal Varian, Google’s chief economist, as saying.] “Improving the efficiency of finding jobs is a really big deal, even if it’s sporadic work.”

Fancy Hands founder Ted Roden told me that his company often provides "a better opportunity than is offered locally. For example, a number of people have left jobs at gas stations and Domino's pizza to work with us full-time because (they've told me), the work is better and the pay is better. One even visited us at the office and brought gifts ... It's actually a surprisingly good deal for them."

That may well be true, but at this stage it's difficult to get reliable numbers on what the average wages for Fancy Hands or Task Rabbit contractors are. What we can be reasonably sure of, however, is that these services are perfect examples of what Lilly Irani, a researcher at the Department of Informatics at the University of California, Irvine, and her co-author Six Silberman have described as "the fragmentation of labor into hyper-temporary jobs ... an intensification of decades-old US trends toward part-time, contingent work for employer flexibility and cost-cutting."

A classic temp job, filling in as a receptionist for six weeks, seems like an old-school, full-pension-when-you-retire, gold-plated union sinecure when compared to this new model of work. Job security simply doesn't exist. Some of the tasks available for Fancy Hands completion pay as little as $2 or $3. If you can do 12 such tasks in an hour, you might earn a decent hourly wage, but there are no guarantees. One recent estimate pegged the overall value of the "cloud labor" sector at $1.2 billion. But the same report also noted that the average wage at the biggest cloud labor operator, Amazon's Mechanical Turk, was around $2 per hour, or possibly less.

Classifying workers as independent contractors supposedly avoids the constraints imposed by minimum wage laws, but this theory has yet to be tested in court with respect to cloud labor. Online contracting also escapes a host of other labor laws. It's the same old story we've become familiar with over the past few decades. Technological advances are putting serious pressure on the working person's ability to command a living wage. If the data showing that workers are grabbing a smaller and smaller piece of the overall income pie even as productivity continues to grow tells us anything, it's that employers are benefiting far more than workers from Silicon Valley's disruptive innovations.

The same forces that have enabled American corporations to offshore and outsource so much labor overseas are now atomizing the most basic tasks of daily life -- everything from lawn mowing to scheduling a dentist appointment. Fancy Hands employs only American contractors, but the principle is the same. With the Internet, and particularly with the mobile Internet, anyone, anywhere, is a potential employee.

But they are also less visible than ever before, not just to the outside world, but also to employers.

"Hiding workers behind web forms and APIs," write Irani and Silberman, "helps employers see themselves as builders of innovative technologies, rather than employers unconcerned with working conditions."

When all one has to do is log in to Fancy Hands to get a particular job done, the already fraying sense of a social contract between employer and employed attenuates even further.

In my back and forth with Fancy Hands' founder, Ted Roden struck me as a thoughtful person who was not unconcerned with the quality of life his contractors enjoyed. He also made the undeniable point that there's no going back. We're living in the future, now.

"I believe the nature of work isn't changing; it's already changed. Our assistants have the opportunity to work wherever/whenever they want, but our users can pretty much expect that we're always on. Now that's in large part due to the technology we've developed, but it's also related to a) the nature of so much work that needs to get done can be done by anyone from anywhere, and b) the Internet can easily connect those people."

Roden did acknowledge that so far, "the Internet hasn't been some amazing equalizer that we thought it would all be."

"But it's happening," he stressed. "And the mobile Internet (Web- or app-based) is accelerating that. The impact of a planet connected via the Internet in their pocket cannot really be overstated. I hope. The possibilities that opens up are astonishing."

Sure. No question. And perhaps there's also hope that Internet-native solutions will emerge that redress the growing imbalances between employer and virtual contractors, as we all get more comfortable in our new workspaces. Four years ago, Lilly Irrani helped create Turkopticon, a browser extension that gives Amazon's Mechanical Turk workers the power to rate their employers.

But that's a small stick with which to combat the big leverage of Internet-powered capital. The lesson that sticks out from a close look at cloud labor is that, yes, the world is changing, and definitely in ways that are better for some people. But not for everybody, at least not yet.