The worst anti-Spitzer argument ever

The New York Times and others claim his candidacy is bad for democracy. An alternative scenario is far worse 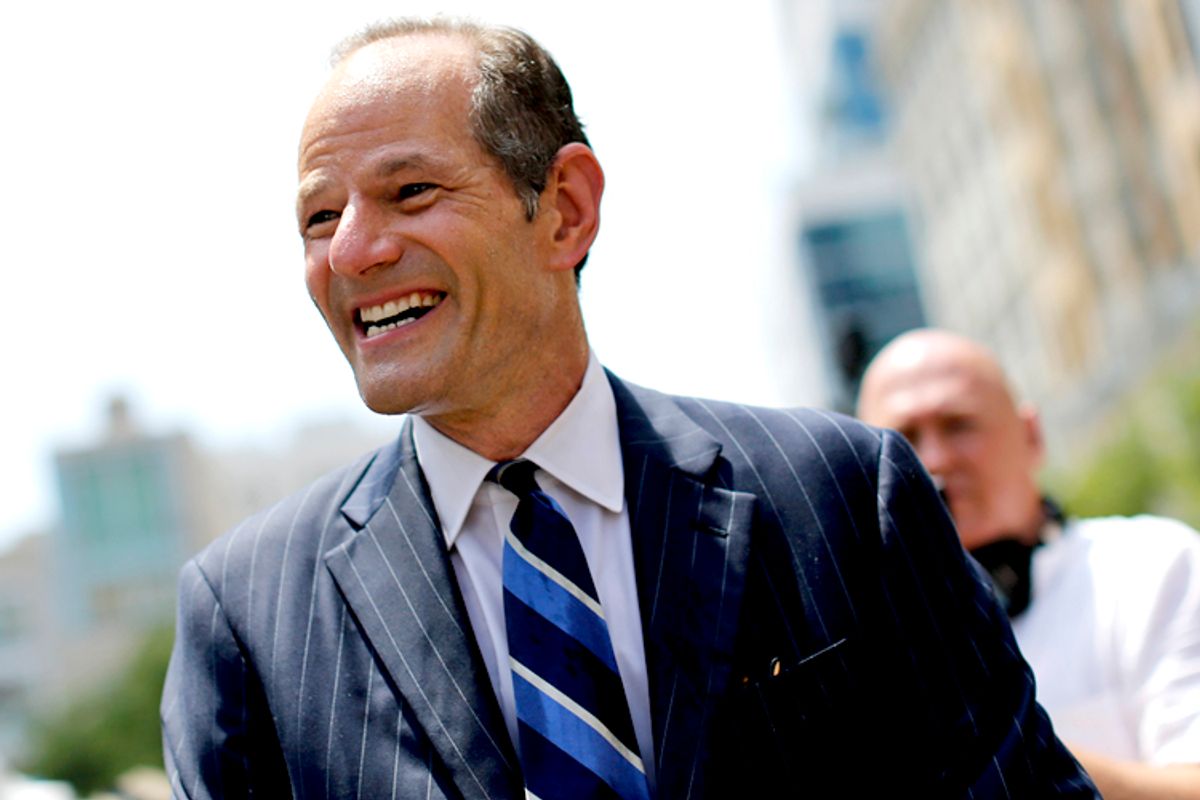 A lot of people, especially in elite media and political circles, don't want Eliot Spitzer to run for New York City comptroller. They have all sorts of reasons, some more valid than others. Some are offended that he had sex with a prostitute, some pretend they’re offended he had sex with a prostitute, and some hate the guy because he was an aggressive prosecutor of financial misconduct.

But another explanation catching on goes something like this: Eliot Spitzer’s candidacy is bad for democracy.

There will always be candidates for public office who are ethically compromised, temperamentally unsuitable and politically incompetent, but if they insist on running anyway, who has the right to tell them not to?

Then the editorial basically goes on to do just that (emphasis added):

That said, Eliot Spitzer’s bid to recycle himself by running for New York City comptroller is unnerving on many levels, and not just because he has suddenly decided to undo the buckles of self-restraint that used to keep disgraced ex-politicians (for soliciting prostitutes, in his case) from re-entering the public sphere.

Mr. Spitzer, like Mr. Weiner, is a political animal who clearly finds it hard not to have an audience. That’s understandable, but did they have to bring us all along on their journeys of personal ambition?

New Yorkers, like all citizens, deserve serious and thoughtful political campaigns, but between Anthony Weiner, the former sexting congressman, and Client 9 (the name given to Mr. Spitzer in the federal investigation of the escort service he used) and the self-described madam who ran that escort service and now claims she’s going to run against her former customer, the stage is set for a summer of farce.

If he makes it on the ballot, he will doubtless discuss issues and ideas like the policy wonk he is. But he will also use his money and name recognition to suck all attention from the other candidates, especially the capable Manhattan borough president, Scott Stringer, who deserves better treatment.

Voters will have to do their best to tune out the noise.

The Times ed page has cultivated an image over the years as a kind-of self-appointed protector of democracy and good governance. This is a good thing, in theory – we need that – but the application of these principles has been a bit, shall we say, situational, from blessing Mike Bloomberg's term limit reversal (after voters had twice voted for it) to effectively overlooking his many campaign finance perversions.

Anyway, the Times here is arguing that Spitzer's running will undermine the sanctity of this political campaign by creating “noise,” depriving voters of “serious and thoughtful political campaigns,” and making it harder for Scott Stringer, another fine candidate in the race.

But at the risk of nitpicking, Scott Stringer is not just “another candidate” in the race. He is also: “the only other candidate.” Which means that Spitzer’s entry would change the race from one man running unopposed for a significant citywide office overseeing $140 billion in assets held by the city’s five pension funds – to one in which another candidate “will doubtless discuss issues and ideas” (by the Times' own admission). In other words, we’d go from no campaign to a rigorous one.

Moreover, when the Times says that Stringer “deserves better treatment,” what does that mean -- the status quo in which he has no race at all? As former Spitzer aide John Kenny writes in an ambivalent post about his former boss, in which he says he’s not sure whether he’d support him:

It’s hard to see how Scott Stringer’s 13 years in Albany as a state assembly member and 7 years as Manhattan Borough President qualify him to be comptroller. Maybe he’ll convince me and the broader public by September 10th, but a competitive race that makes him have to do so seems like a positive. His stealth, unopposed candidacy, apparently enabled by his former mayoral competitors who were glad to get him out of that race, is bad for democracy.

That last point is worth explaining. Stringer, the one now complaining about Spitzer’s last-minute entry into the comptroller’s race, himself big-footed someone when entering it. The capable Manhattan borough president had been essentially running for mayor for months, while a field of lesser-known candidates like City Council member Dan Garodnick sought the comptroller position. But when polls showed Stringer with little chance of winning the big prize, he abruptly switched races, entered the comptroller campaign, and cleared the field. This was certainly his right, and no judgment is implied. But for Stringer to now complain about a higher-profile late entry swooping into the race and shaking up the field seems to omit a bit of his own personal history.

But that’s just what he’s doing, and like the Times, he’s got another “this is bad for democracy” argument (though his is less bad than theirs):

If Eliot Spitzer cared about democracy, he would participate in the City’s campaign finance program and not use his personal fortune to try and buy this election wholesale.

Stringer, of course, is right that all candidates should engage in public finance programs that keep private money and influence out of the races. I didn’t notice Stringer making this argument when Barack Obama opted out of the federal program, but I strongly share his sentiment now nonetheless. Still, it is a bit odd that a candidate who is determined to run unopposed – and will exercise his absolute right to challenge all of Spitzer’s petition signatures in an effort to keep him off the ballot – is invoking "democracy" as a key talking point of his campaign.

In effect, Spitzer’s entrance into the race takes it from one good candidate cruising to the office, without having to speak to voters or make a case -- to two good candidates having to work hard, meet the voters, and make their best case.

The Times and Stringer can argue that this is bad for democracy. We’ll see if voters buy it.