Racial division, suburban exodus and a barren tax base have left one solution: Make the suburbs merge with the city 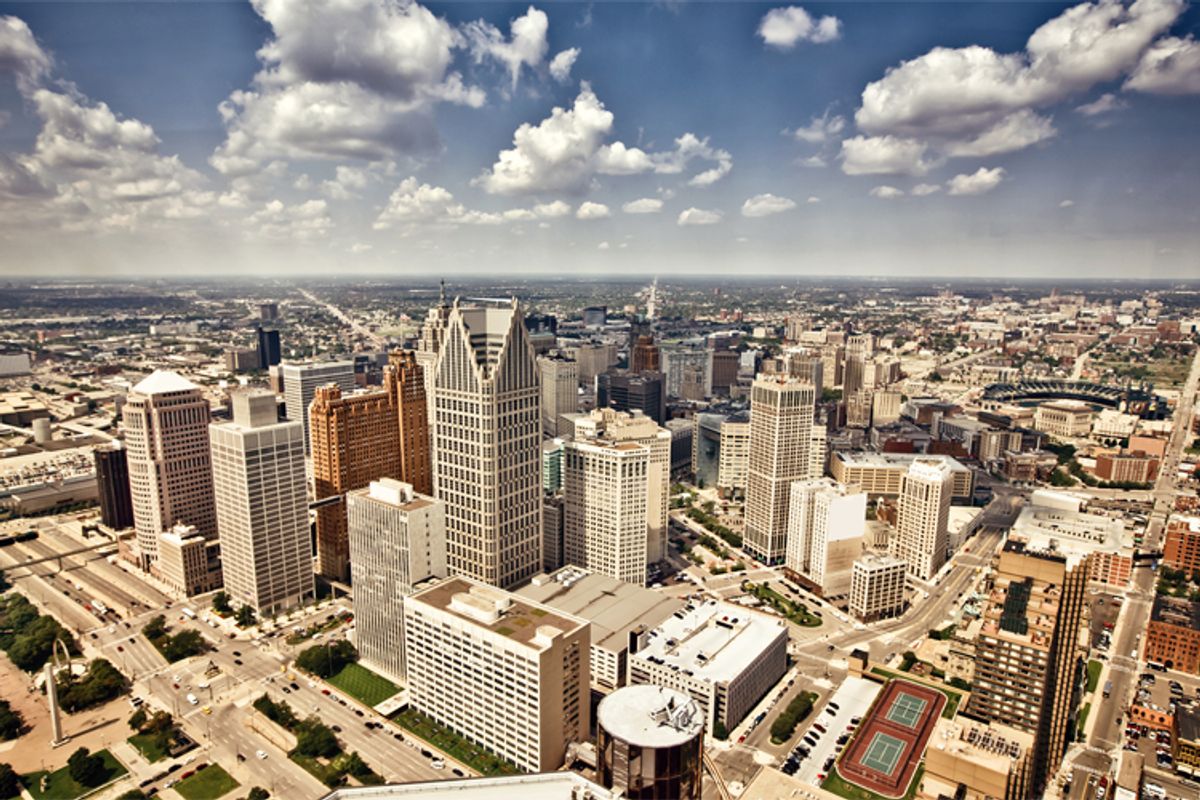 The gaunt man was sitting on a bench in the overgrown park at the corner of Chene and Ferry streets in Detroit, drinking an Old Milwaukee tallboy he’d bought at a Yemeni party store, and trying to peddle an old point-and-shoot film camera for $3. He was an ex-con who’d served 15 years for using a knife to rob a chicken shack of $81, so he had no other way to make money.

“My name is J.C. Hood, all good in the neighborhood,” the man introduced himself. “My people have a house over here they let me stay in. It’s an old house, almost on its last legs. No utilities, no heat, no water, no lights. No phone. I got a propane heater and a bed. I eat out and I bathe out, at the Capuchin Soup Kitchen at Mount Elliot and St. Paul. I earn about $5,000 a year, hustling. I collect cans at Tigers games. I ride my bike, man, for hours, looking for stuff. I found a pair of boots. I can get $5. Houses, doors be open. You go in there, you can find a lot of stuff. Foreclosures, people just leave their stuff there. I’ve found TVs, stereos.”

There was a time, Detroiters claim, when only New York’s Park Avenue generated more retail dollars per square foot than Chene Street. In the middle of the 20th century, Chene (pronounced “Shane” after the French habitant who farmed there when the land still belonged to the Sun King) was a Polish Broadway, a self-contained ethnic village where housewives bought furniture from Moliszewski, sausage from Jaworski’s Butcher Shop, and dressed the family at Rathenau’s. Every Saturday, Polish truck farmers and Jewish vegetable peddlers set up stalls at the Chene-Ferry Market.

The 20th century was simply an urban interlude in this part of Detroit, between colonial agriculture and post-industrial dereliction. The Chene-Ferry Market closed 20 years ago, leaving only a fading sunrise mural. The local bank slid down the retail scale, becoming a Coney Island stand, then an empty storefront. Since 1980, the neighborhood’s population has dropped from 2,571 to 623, while the ratio of occupied to vacant houses went from 9-1 to 2-1. The only difference between the East Side of Detroit and the rural South is reliable cellphone service.

J.C. Hood is trying to salvage every meager penny out of the wealth remaining in this impoverished city. Measuring his financial goals in minutes and hours, he’s looking for just enough money to pay for the next $1.99 can of beer, the next 99 cent bag of potato chips. On a larger scale, that’s exactly what Detroit’s state-appointed emergency manager, Kevyn Orr is doing, as he determines whether to declare the largest municipal bankruptcy in American history. Orr’s actions are just as short-sighted, and just as futile, as those of the hustlers at Chene and Ferry. Bankruptcy is not going to save Detroit, or solve any of its financial problems.

Orr has only to read his own Proposal for Creditors to see that Detroit is no longer a viable municipality. Since 1950, 1.2 million people have left Detroit – enough to constitute the 10th-largest city in the United States. (Detroit itself, with 684,799, is 18th.) Detroit is the poorest city in the United States: Its median household income of $27,862 is half the national average. Despite its population crash, Detroit is the same size it was in the ’50s. So the police still need to patrol 140 square miles of streets, the public works department needs to pave those streets, and the water system still needs to maintain the network of pipes underneath. But there’s no way a city of 680,000 people who work as short-order cooks, home healthcare aides and daycare providers can support an infrastructure built for 1.8 million who worked as autoworkers, engineers and mechanics. (And that’s those who do work – the official unemployment rate is 18.6 percent, according to Orr’s report, although some estimates put it at 50 percent.) Property tax revenues have decreased 20 percent over the last five years – even though Detroit has some of the highest tax rates in Michigan: a 2.4 percent income tax rate and a 1.3 percent property tax rate. As Orr notes, “this tax burden is particularly severe because it is imposed on a population that has relatively low levels of per capita income.”

(Detroit also got stiffed by the state, which promised revenue sharing if the city would cut its income tax from 3 percent to 2.4 percent. While Detroit kept up its end of the deal, the economic troubles of the 2000s, when Michigan was mired in a decade-long recession, prevented the state from making all its agreed-on payments. Detroit has missed out on $200 million a year in state money and about $50 million a year in income taxes. The city began running budget deficits in 2004-05, and is now $326 million in the red.)

For all Detroiters pay, 40 percent of their streetlights are burned out, and their understaffed police department solves only 8.7 percent of its cases – one reason Detroit has the highest crime rate of any big city. A small upper crust remains in Detroit, occupying beautiful Tudor neighborhoods on the city’s fringes. In East English Village – one of those Tudor neighborhoods – residents pay a private company to plow the streets. The city is in a financial death spiral: so overtaxed and unlivable that most people who can afford to get out are moving to the suburbs, further reducing the tax base and requiring more cuts. Detroit is no longer a city, in the sense of a self-supporting entity: It’s the lower-class district of a metropolitan area, abandoned to its dwindling devices. Demographers estimate the population will bottom out at a half-million, but a Detroit News poll found that 40 percent of Detroiters expect to leave in the next five years.

John Givans, who lives in one of the few remaining sturdy houses near Chene and Ferry, would like to sell out and buy a farm in the country, where the schools are better for his tween daughters, but he doesn’t think his home will fetch enough – the median sale price in Detroit is $11,100.

“The city services out here are nonexistent,” he said. “It’s almost like a farm now. I got rabbits, pheasants, raccoons. If I could get rid of the crime, I’d never leave.”

Since Detroit can’t maintain the accouterments of a modern American city with its current tax base, the most practical solution to its problems is regional consolidation. Detroit should merge with its suburbs, as Miami, Indianapolis and Toronto did. A megacity composed of Wayne, Oakland and Macomb counties would contain 3.9 million people, making it the second-largest city in the United States. Detroit could consolidate its police and fire services -- which consume nearly 60 percent of its general fund budget -- with surrounding departments.

So far, that has been politically impossible, because of black-white resentment and urban-suburban enmity dating back to the 1967 riot, and encouraged by such race-baiting politicians as Detroit Mayors Coleman Young and Kwame Kilpatrick, and Oakland County Executive L. Brooks Patterson. Detroiters didn’t want to share power with the suburbs, and suburbanites didn’t want to share tax revenue with Detroit. Now that Detroit has become a ward of the state, with Mayor Dave Bing’s powers usurped by the emergency manager, the city’s objection is moot. Suburbanites would still resist, but they’d benefit from the efficiency of a single local government, and from a stronger central city, which would make the entire area more attractive to out-of-state business. As for complaints that the suburbs would be forced to subsidize the city’s underfunded-by-$3.5-billion public pension system, well, hundreds of thousands of suburbanites grew up in Detroit, where they were educated by schoolteachers and kept safe by cops and firefighters who are now in danger of having their retirement benefits cut. Moving across 8 Mile Road should not relieve them of all responsibilities to the city they fled.

Unless Detroit and its suburbs start cooperating, Michigan will continue losing jobs, residents and college diplomas faster than any state in the nation.

The most hopeful Detroiter I know is a young Polish-American woman who grew up in the suburbs, graduated from Harvard and, in an act of reverse white flight, bought a Mies van der Rohe condo by the Detroit River. She believes that her generation can bridge the divide across 8 Mile, which is culturally, sociologically and economically even wider than the street’s name suggests.

“The younger generation is not as racially divided,” she said. “A lot of it is pop culture. If you grew up in the ’80s, 'The Cosby Show' was on TV. We didn’t fight those battles during and after the riot. We don’t carry those scars.”

They don’t, but Detroit does.