6 kinds of atheists and non-believers in America

A new poll divides people with no religious affiliation into a few basic categories, some of which may surprise you 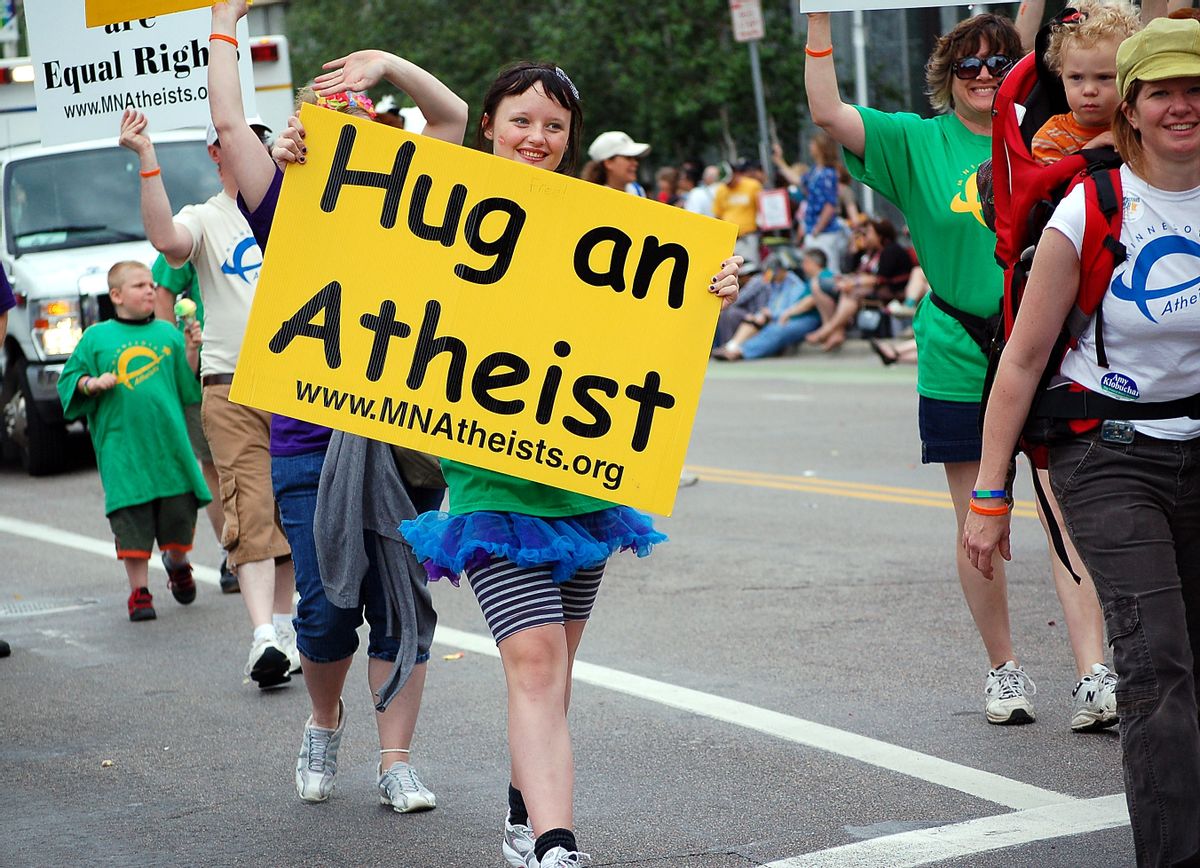 With the rising number of people in America—now nearly one in five—who have no religious affiliation at all, more people are asking questions about who exactly these unbelievers are. Not all of them identify as atheist or agnostic or a non-believer, but plenty do, and while there are many people offering to defend this particular community, few are willing to speak for them.

After all, unlike religious believers, non-believers have no authorities, no hierarchies, no theology, nothing for us to look at to determine exactly who these people are. In addition, the public image of atheists, who are a diverse group in reality, is being shaped by a handful of vocal white men—Richard Dawkins and Christopher Hitchens being the most famous—who, while well-respected in the atheist community, are not really representative.

Because of this, researchers at the University of Tennessee at Chattanooga decided to poll and interview non-believers to find out what kind of people abandon religious faith and why. Based on this research, the project authors were able to divide non-believers into six basic categories, some of which may surprise you.

First things first: While atheists have a public image of being dogmatic and belligerent—an image that famous atheists like Bill Maher only end up reinforcing—researchers found that to absolutely not be true. Only 15 percent of non-believers even fit in the category of those who actively seek out religious people to argue with, and the subset that are dogmatic about it are probably even smaller than that. But that doesn’t mean that the majority of non-believers are just sitting around, twiddling their thumbs and not letting atheism affect their worldview. On the contrary, researchers found that the majority of non-believers take some kind of action in the world to promote humanism, atheism or secularism. Here is a breakdown of the types.

1. Intellectual Atheist/Agnostic. By far, the most common kind of non-believer, at nearly 38 percent. This group enjoys intellectual discourse, and while they’re often very certain about their beliefs, they’re not belligerent about it. These types often get mistaken for dogmatic atheists, however, because they have a tendency to join skeptic’s groups or otherwise find avenues to discuss non-belief with others. However, as researchers note, these non-believers “associate with fellow intellectuals regardless of the other’s ontological position,” so long as their friends “versed and educated on various issues of science, philosophy, ‘rational’ theology, and common socio-political religious dialog.” They like debating religion, but aren’t particularly interested in chasing down believers to give them a hard time.

2. Activist. This group also gets commonly accused of being dogmatic, but like the intellectual atheist, while they’re firm in their beliefs, they’re intellectually flexible and don’t prioritize attacking believers. Instead, they are motivated by a strong sense of humanist values to make change in the world, often making related issues—such as feminism, gay rights, or the environment—a priority over simply advocating atheism. This group also advocates for a better, more egalitarian atheist community, according to researchers: “They seek to be both vocal and proactive regarding current issues in the atheist and/or agnostic socio-political sphere." Because of this, they unfortunately attract a lot of abuse from a small but vocal minority of atheists who disapprove of linking secularism with larger social justice issues, but they do have the numbers on their side. They are the second biggest sub-category of non-believers, making up 23 percent of non-believers.

3. Seeker-Agnostic. This group, which makes up 7.6 percent of non-believers, are unlikely to be as critical of religion as most other groups. They prioritize not-knowingness. If you ever come across people saying, “I don’t know, but neither do you!” regarding religious belief, you’re dealing with a seeker-agnostic. They don’t really believe in anything, but they are uncomfortable committing to non-belief completely. They routinely get accused of intellectual cowardice by atheists, but researchers defend them, saying, “For the Seeker-Agnostic, uncertainty is embraced.”

4. Anti-Theist. This group tends to get conflated with all atheists by believers, but they only constitute 15 percent of non-believers. Like the Intellectual Atheists, they like to argue about religion, but they are much more aggressive about it and actively seek out religious people in an effort to disabuse them of their beliefs. While most atheists limit themselves to supporting a more secular society, anti-theists tend to view ending religion as the real goal. While plenty are aggressively angry, researchers point out this isn’t necessarily a bad thing: “For example, many of the Antitheist typology had responded as recently deconverted from religious belief or socially displeased with the status quo, especially in high social tension-based geographies such as the Southeastern United States,” and being combative with believers might help them establish their own sense of self and right to non-belief.

5. Non-Theist. They don’t believe in any gods, but don’t think about those who do very often. In such a religious society, simply opting out of caring much about religion one way or another is nearly impossible, which is why this group is only 4.4 percent of non-believers. “A Non-Theist simply does not concern him or herself with religion,” researchers explain. In some skeptical/atheist circles, this group is disparagingly referred to as “shruggies," because they simply shrug when asked their opinion on religion. However, some quite likely are indifferent because they’re fortunate enough to live in a bubble where belief doesn’t matter one way or another.

6. Ritual Atheist/Agnostic. While you might think the anti-theist is the non-believer type that scares Christians the most, it turns out that it may very well be the Ritual Atheist/Agnostic. This group, making up 12.5 percent of atheists, doesn’t really believe in the supernatural, but they do believe in the community aspects of their religious tradition enough to continue participating. We’re not just talking about atheists who happen to have a Christmas tree, but who tend to align themselves with a religious tradition even while professing no belief. “Such participation may be related to an ethnic identity (e.g. Jewish),” explain researchers, “or the perceived utility of such practices in making the individual a better person." The Christian Post clearly found this group most alarming, titling their coverage of this study “Researchers: 'Ritual' Atheists and Agnostics Could Be Sitting Next to You in Church,” and giving the first few paragraphs over to concern that people in your very own congregation may not actually believe in your god. The atheism, it seems, might be coming from inside the house (of God).

While a lot of non-believers don’t really do much when it comes to acting on their non-belief, for those who are trying to create a more organized atheist community that takes up activism and offers community, there is plenty of reason to hope. The Intellectual, the Activist and the Anti-theist all, to one extent or another, discuss their non-belief with others or let their non-belief have significant impact on their activities. Taken together, they make up nearly three-quarters of non-believers. That’s a big group that has a lot in common, and perhaps that energy could be harnessed as a force of good.

Amanda Marcotte co-writes the blog Pandagon. She is the author of It's a Jungle Out There: The Feminist Survival Guide to Politically Inhospitable Environments.