Hey, Rob Delaney and Margaret Atwood: Get a room! 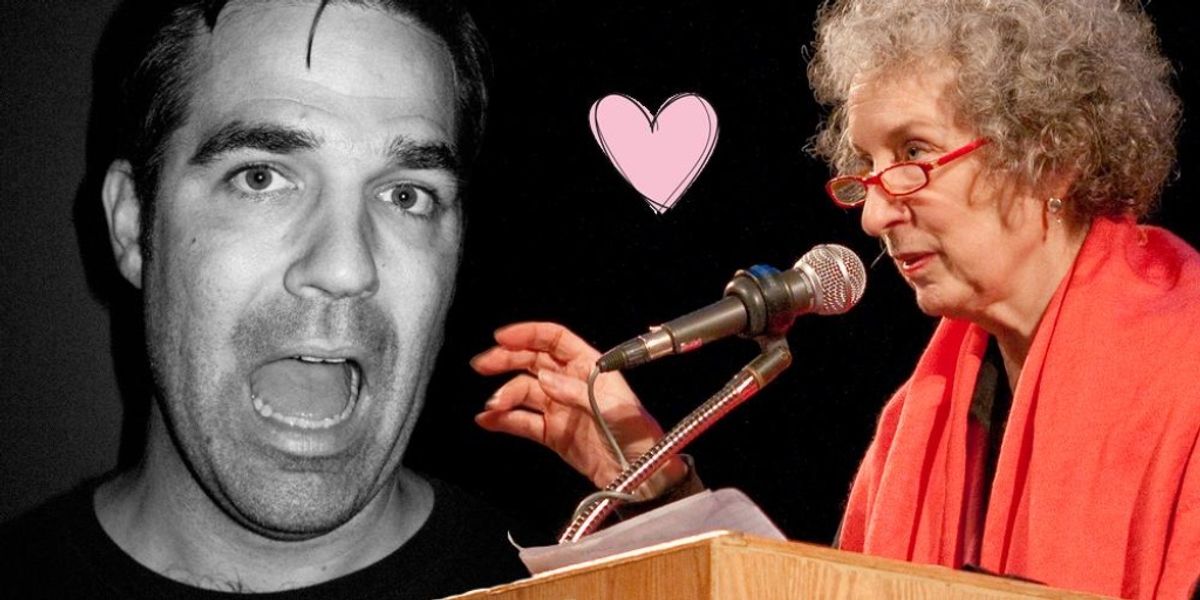 Comedian and Twitter master Rob Delaney and celebrated poet and author Margaret Atwood need to get a room already.

Their epic story began in May when the usually raunchy and absurdist L.A. comedian tweeted to Atwood's handle that she was on his list of favorite things, and #FollowFriday-ed her. Atwood wrote back teasing that one of Delaney's other well known favorite things is big butts—and that she was honored to be on that same list.

One of @robdelaney's favorite things is a @MargaretAtwood novel. Smart man. http://t.co/pAY6A95WKH

@tinyavocados @robdelaney: What can I say? Me and tight butt on the same list? I blush modestly.

Then, Delaney tweeted a sincere compliment to the 73-year-old Atwood, who is actually very active on Twitter.

Why is @MargaretAtwood so cool? She does literary triple axels on every page and doesn't even SWEAT.

The author of The Handmaid's Tale and Oryx and Crake responded flirtatiously, urging the 35-year-old Delaney to slip their love notes under the door so they could be kept private.

@robdelaney: Rob. We have to stop meeting like this. People are noticing. Just slip the passion notes under the door at midnite... Shhh. xx

The Handmaid's Tale is a beloved novel about a dystopian future where women are forced to give birth, and so Atwood, of course, retweeted Delaney's deep and personal piece in the Guardian about why he believes in a woman's right to choose.

@MargaretAtwood Fair Margaret, if you have 3 min, I wrote a piece in the Guardian about a woman's right to choose: http://t.co/E4dL5JOUYt

Delaney also posted a photo of himself reading an Atwood novel, which the Toronto-based writer retweeted.

The Delaney-Atwood love affair burns bright on Twitter feeds. People are loving it. Dare we have a new celebrity supercouple on our hands? Robgret? Delatwood? Robwood?

When asked about his Twitter affair with Atwood, Delaney told the Daily Dot that he does not comment on his personal life, but… "That said, I believe our passion speaks for itself."

Margaret Atwood tweeted at me.

@MargaretAtwood I will observe protocol from here forward, my love. Except when I won't.

@MargaretAtwood I'll be thinking of you and gazing northeast...