"The Newsroom" puts itself on trial 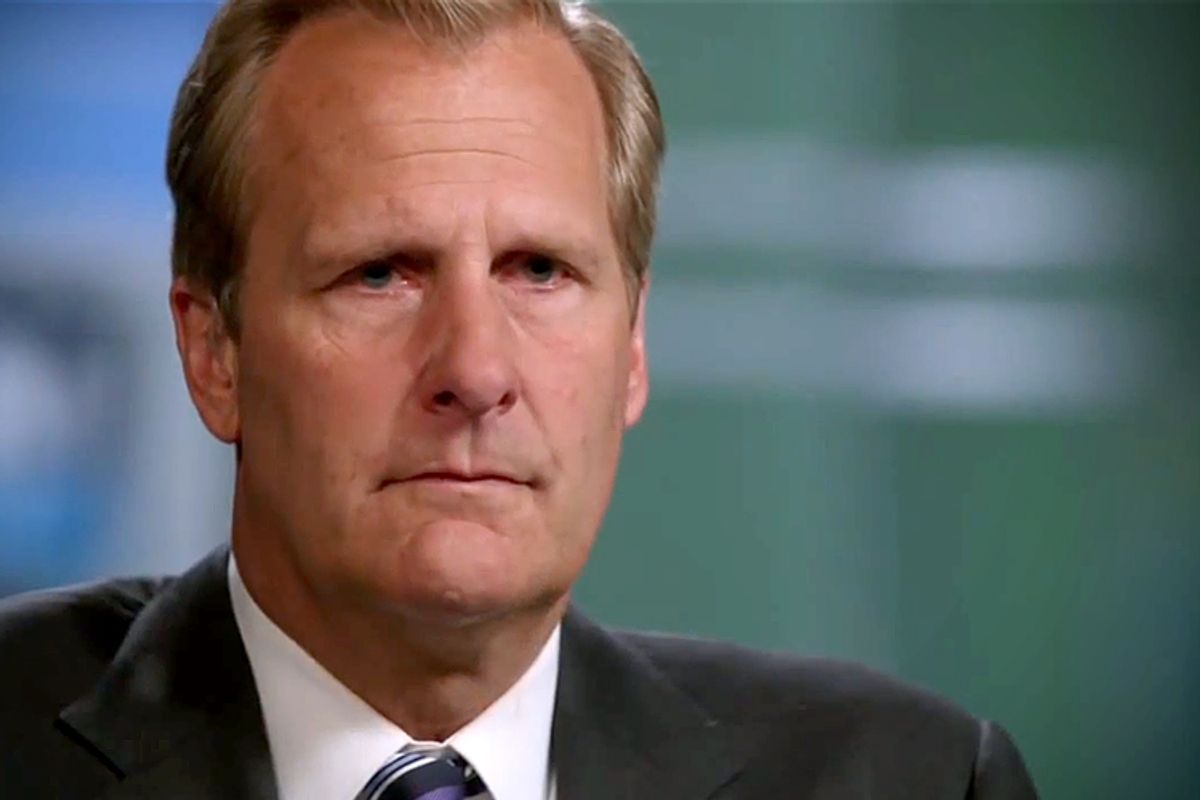 This Sunday brings back "The Newsroom," an HBO show about things you wouldn’t believe happened in 2011. For Season 2, the news events of that very newsy year are framed by the news-making consequences they have in 2012 for the staff of the American cable news show “News Night.” And if after those two sentences you’re sick of the word “news,” I do not recommend this program.

Conveniently, Aaron Sorkin’s "The Newsroom" has skipped over the June 2012 debut  of Aaron Sorkin’s "The Newsroom," so that we are now in the long nights leading up to Obama’s November 2012 reelection. What we know: Something happened. It had something to do with Genoa. The story went wrong or was a lie, the ensuing lawsuit is massive, and the network’s lawyer — played with brass tacks and wisecracks by the excellent Marcia Gay Harden — is prepping each staffer to give a deposition. "The Newsroom" is itself on the stand.

I watched four episodes of the first season and then just ... couldn't, but it is my understanding that the drama did not get more contemporary or politically complex or less condescending to its audience, and that the audience noticed, and declined to show up the next week (although the show rallied to break its episode record in the finale, with 2.3 million viewers). It is also my understanding that the entirety of Sorkin’s intended magnum opus functions on a ‘90s meta level that makes me wish Baudrillard were alive to publish "The Newsroom Did Not Happen" with, like, Semiotext(e).

So, to the tried show’s show trial we go. Let’s examine the defendants. (Spoilers, of a sort, follow.)

Maggie Jordan, charged with two counts of unreasonable ignorance, premeditated travel to a third-world country as if this were some book called "Eat, Prey, Report," and possession of manic pixie dream-dust with intent to sell

Episode 2, Mackenzie McHale (Emily Mortimer) to Maggie (Alison Pill): “You can’t pitch me Africa. It’s a huge place.” Mackenzie, as you may remember from last season, sees herself in Maggie — and looks like she’d rather be blind.

In the first four episodes it is Maggie, the hapless assistant-cum-associate producer, who provides the arc of greatest change. Maggie had long, naturally blond hair; now she has short, spiky hair the color of a Swedish fish. Because one would never make herself look less conventionally pretty unless things got completely out of hand, we soon discover that in 2011 Maggie sent herself on a reporting mission to Kampala, Uganda, where she witnessed a scarifying death. Why she deals with it like she’s Avril Lavigne in a messy divorce, I doubt we will ever know.  Women!

But Maggie’s troubles didn’t begin with Kampala. That would be strange. In fact, Maggie hardly knows what or where Kampala is until she looks at a map and thinks, hey, Africa is really far away from my boy problems. It takes another boy, Jerry Dantana (Hamish Linklater), to mumble something about Africa and terrorism — ta-da! An idea. To Maggie’s credit, she Googles the region, presents boss-lady McHale with a #factsonly brief, and devises a straightforward-but-risky reporting mission. To date, her reporting skills have extended to “we should probably check Twitter, too,” and so what could possibly go wrong? Ha! Guilty.

Mackenzie McHale, charged with five counts of Leaning In and one count of petty larceny

When Mac is acting a boss, flipping her girl-detective lob, solving high-level technical problems live in 20 seconds, sassing Will McAvoy (Jeff Daniels), saying she’ll pay for her own drinks, thanks, but then “realizing” she left her bag upstairs and scamming $60 off Will, it’s hard not to be charmed. Then you remember she’s a Thatcherite.

Mac to Kendra, a black staffer, before reading a news item containing the N-word: “Kendra, I apologize.” Kendra to Mac: “I accept your apology on behalf of all the black people in the room.” There are no other black people. Kendra, please take Mac’s job.

Or, Mac to Neal Sampat (Dev Patel) on an Occupy Wall Street email that “went viral” in 15 minutes: “They always start by inventing a new language, don’t they?” But Mac’s no post-post-structuralist; she thinks protest is mostly jargon. When it begins in earnest, she calls OWS a “pajama party,” echoing McAvoy’s earlier complaint that anti-SOPA citizens are “pajama people” attempting to steal their “intellectual property.”

Later, Mac notes that “one of your Occupy idiots” jumped in front of her cab, forcing her to walk 14 (14!!!!!!!!!!!!!!!!!!) blocks in the rain. Does Neal know what the rain does to her stilettos? When Neal points out that those shoes cost $1,200, she arches a brow and calls him “spunky.” This is how you know that Mac is no longer even the glibbest of liberal feminists, or the Real Tina Fey, but an actual 45-year-old man. Guilty.

Jim Harper, charged with impersonation of a Man-Child

In love with Maggie but unable to form the words, Jim (John Gallagher Jr.) abandons his post as Mac’s Boy Friday to take a stringer’s seat on the Romney bus. There, he wonders why nobody is asking the really stupid questions, like why a Republican presidential candidate in the United States has flip-flopped on issues like #climatechange, and #abortion. When he likes an Internet Girl — Hallie Shea (Grace Gummer), a sort of early Ana Marie Cox — he proves it by negging her to do her job better.

Still, we might forgive Jim his hot-balled idealism were we not sure it’s the first of five points in his plan to become Will McAvoy. Guilty.

Don Keefer, charged with one count of dumping Maggie after seeing a YouTube video of her screaming that she’s in love with Jim — on a "Sex and the City" tour bus! — without asking her whether or why that was true, not to mention 17 prior convictions of ultra-lame boyfriend behavior

Neal Sampat, charged with criminal possession of a sincere belief that a mainstream news organization is the best way to disseminate the messages of Occupy Wall Street

“You don’t have the patience for complicated things,” says Shelly, the henna-headed anthropology professor serving as not-leader of Occupy Wall Street, to a pathologically earnest Neal. Unfortunately, Sorkin thinks the same of his viewers.

"The Newsroom" depicts Occupy’s softest core as a bunch of MUD coffee-swilling, Williamsburg-dwelling disorganizers with grad-school degrees and a predilection for Quaker hand signals. They are smart, well-meaning and ultimately harmless, and isn’t it always by denying the necessary harm of radical thought that the moderate white man prevails? "The Newsroom" is like the New Yorker, a publication devoted to post-9/11 America, not the post-Occupy world. It is a bellwether for reasonable beliefs. Borrrriiiinnnngg. This is not exactly Neal’s fault, though: He is not (yet) a white man, and he tries harder — and smarter — than almost any of his peers. Innocent.

Sloan Sabbith, charged with two counts of "Sex and the City" feminism

Sloan (Olivia Munn), the genius economist hired by “News Night” for her legs, seems like the sort of sexually Asperger's-y, self-identified Miranda who buys herself a “right-hand ring” because, sorry, boys, she’s married to The Man. I do not like these women. But if you don’t come to love Sloan, you’re not paying attention.

After insisting the show do a panel on drones, Sloan goes live on air with the most progressive thing “News Night” has ever let a woman say, to wit: “I’m able to hold two thoughts in my head at once.” When — in her stock-advice segment — she tells us not to buy from a company that invests in drones if, duh, we don’t like drones, her producer reprimands her by leading her by the wrist into Don’s office. Sloan, to Don: “I’m telling people where the fucking money comes from.” Then, to the producer: “If you ever [do this] again, I’m gonna take out each of your knuckles with a ball peen hammer.” SLOAN FOR PRESIDENT OF A BETTER COUNTRY. Innocent.

Will McAvoy, charged with career suicide in the first degree

Will, poor Will, is having a protracted Don Draper moment. In the first, like, minute of Season 2, the lawyer (Harden) says “fuck me” in the figurative way, and Will literally looks around a roomful of men before asking, Will somebody please fuck Miss Halliday? And she laughs! Laughing at America’s least funny jokes is what men like Will are supposed to do to women. This must be foreshadowing.

It is. As the show wears rapidly, dully on, Will spends most of his off-air time either apologizing to women (did somebody tell him we watch TV?) or being apologized for by his staff. Mostly, it’s the former. He hires the Sorority Girl as an intern. He deals with an embarrassing leak by giving the scoop directly to Nina Howard (Hope Davis) — last season’s TMI reporter, reportedly based on former gossip writer Mandy Stadtmiller — then asks her out on a date. Finally, after down-talking Occupy Shelly on his show in a hauntingly familiar way, he tracks her down to apologize in person. “I’m not smug,” he mea-culpas. “I’m having a crisis of confidence.” Jesus, these men, it’s like an Atlantic cover story. As I say to all my boyfriends: Don’t be sorry, Will. Be better. Court is adjourned.

Sarah Nicole Prickett is a contributing editor at The New Inquiry. Aaron Sorkin once called her "internet girl" in an interview for The Globe and Mail. Follow her on Twitter @snpsnpsnp