What drives women to drink?

They're imbibing more, relative to their male counterparts. Science can't yet explain why 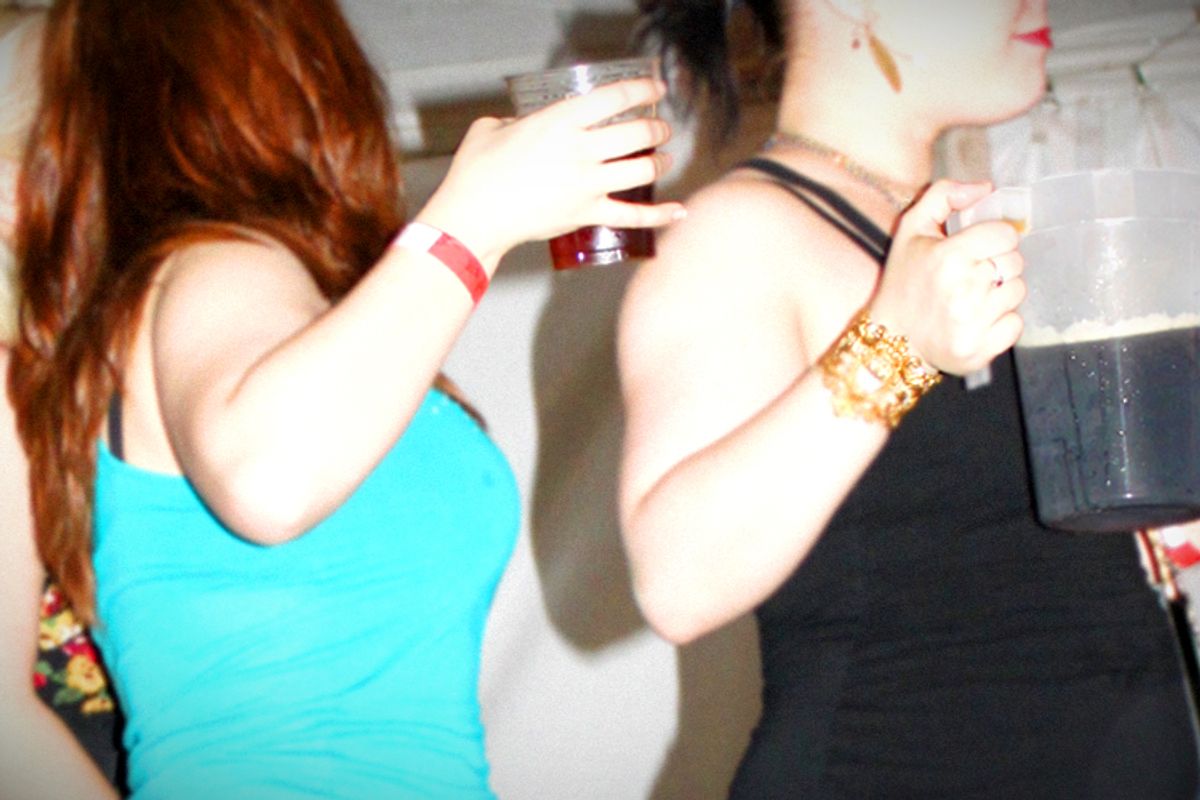 Excerpted from "The Stressed Sex"

The ladette culture epitomises everything that is wrong with young British women. Why do women feel it necessary to act like ʻone of the boys’, are they not satisfied or proud of their own gender? Generally these girls might be good for a ʻbit of fun’ but they are certainly not relationship material!
The Sun,  December 11, 2008

For a pithy reminder of how social attitudes towards male and female drinking can differ, one need look no further than the above comment featured in a Sun story about ladette culture from a few years back. The word ‘ladette’ first appeared in the 1990s, defined by the Oxford English Dictionary as ‘a young woman who behaves in a boisterously assertive or crude manner and engages in heavy drinking sessions’. It is not, of course, a compliment. Excessive drinking may not always be applauded in young men, but it is generally regarded as normal. In young women, on the other hand, the same behaviour is deplored by some as yet another symptom of society’s inexorable moral decline.

‘In many cultures,’ write Marja Holmila and Kirsimarja Raitasalo, ‘alcohol is one of the more powerful symbols of gender roles and identities.’ It’s an assertion that certainly seems credible for Western societies, where alcohol and masculinity seem almost inseparably intertwined. Men have licence to drink—regularly and to excess. Indeed, being able to hold your drink is seen as a mark of a ‘real’ man. Where do men socialize? In the pub. (Even alcoholic drinks themselves are sometimes seen as gendered. Although attitudes and behaviour may be changing, a woman sipping a pint of real ale, or a man ordering a small glass of white wine can still in certain circumstances seem like acts of quiet transgression.)

For women, things are not so clear cut. For centuries, abstinence has been celebrated as an essentially feminine virtue—hence the power and notoriety of Hogarth’s Gin Lane, at the centre of which is a mother so drunk that she doesn’t notice or care that she’s dropped her terrified infant. It’s not so long ago that pubs, for example, were almost exclusively male preserves. And while attitudes have clearly changed in some respects, concerns about female drinking—and particularly drunkenness—persist: witness, for example, the furore over the antics of ‘ladettes’, the title itself an indication that these young women are perceived to be behaving in a decidedly unfeminine way.

Given the acres of newsprint dedicated to the admittedly rising rate of female alcohol consumption, it’s hard not to conclude that women’s drinking touches a cultural raw nerve. (And, as the quotation at the start of this chapter indicates, has done so for many years.) Nothing, it seems, shocks like a drunken woman. How will she take care of her children, her husband, her home? Particular opprobrium is reserved for the woman who drinks while pregnant. Experts do not know how much alcohol it is safe to drink during pregnancy: guidelines vary across the world. But the picture that emerges from newspaper headlines is apocalyptic: ‘Glass or two of wine a week “could damage baby”’; ‘Drinking alcohol while pregnant weakens mother’s bond with child’; ‘Moderate drinking while pregnant doubles risk of child becoming depressed’; and perhaps worst of all: ‘Mothers who drink while pregnant “can give their children a taste for alcohol.”

There’s certainly evidence that women believe that female drunkenness is perceived more negatively than excessive drinking by men. In one study in the United States, for example, the women questioned thought that 50 per cent of other people would strongly disapprove of a woman drinking too much at a party; a drunken man, on the other hand, would offend just 30 per cent. Maybe society’s dim view of female drinking partly explains why women tend to reduce their alcohol intake when they become mothers (just the time, you might think, when a couple of glasses of wine at the end of the day are more welcome than ever). Fathers, incidentally, do not alter their drinking habits with the arrival of their offspring. And perhaps it’s one of the reasons why women typically reduce their drinking when they start work, while men increase it. Women may be acutely aware that, in society’s eyes, alcohol and the role allotted to them—particularly as wives and mothers—do not mix.

Could these cultural attitudes partly explain the difference between male and female rates of alcohol disorder? It’s entirely plausible: traditionally, men have been pushed towards alcohol, while women have been pulled away. Drinking and especially drunkenness have been regarded as normal for men and abnormal for women. And there’s reasonable evidence to support such a hypothesis, though it’s far from proven. We haven’t come across any really powerful tests of the theory, possibly because such a test would be so difficult to design. Defining gender roles and measuring social beliefs about them are a tricky business. It’s made more complicated by the fact that these beliefs vary so much both within and between countries, meaning that it’s difficult to compare like with like. Despite this, several studies seem to bear out the idea that rates of alcohol disorder reflect social views about drink and gender.

The husband-and-wife team of Richard and Sharon Wilsnack have spent decades investigating the interactions between gender, culture, and alcohol use. (Richard Wilsnack is a sociologist; Sharon Wilsnack, a clinical psychologist. Both are based at the University of North Dakota.) One of their early studies, conducted in the 1970s, covered 13,000 girls and 5,000 boys. Those girls who rejected conventional ideas of female behaviour tended to drink more, and were at greater risk of alcohol-related problems. And a number of other cross-sectional studies have shown that, if you take out the effect of gender roles, the gap between male and female alcohol use and abuse narrows. The masculine stereotype normalizes excessive drinking; the feminine stereotype, on the other hand, encourages abstinence or at least moderation. It’s no wonder that men are more prone to alcohol disorders.

We can see this effect at work from the other direction as it were. The traditional female role is one of relative powerlessness. Men have a career; a salary; a public role. And the liberty to drink regularly and to excess. Women, conventionally, have none of these things. What happens to the gender difference in alcohol use when these traditional roles are challenged? A team led by Giora Rahav of Tel Aviv University (and including, incidentally, Richard Wilsnack) analysed data from twenty-nine countries across the globe, ranging from the UK and the United States to Costa Rica and Argentina, Japan and India to Nigeria and Uganda. They concluded:

And it’s very clear that, among younger age groups, women are catching up with men in alcohol consumption—presumably as a result of these social changes. In their review of current research on the topic, Columbia University epidemiologist Katherine Keyes and colleagues noted that:

Younger birth cohorts in North America and Europe are engaging in more episodic and problem drinking. The gender gap in alcohol problems is narrowing in many countries, suggesting shifting social norms surrounding gender and alcohol consumption.

We shall have to wait to see whether the gap will increase again as these cohorts age. But higher rates of alcohol-related problems are a very high price for women to pay in order to enjoy greater social equality.

There’s a long way to go before we fully understand why men drink more, and use more drugs, than women. The amount of research on the issue is much less than that on gender differences in depression and anxiety—and, as we’ve already seen, even the much greater volume of work on emotional disorders hasn’t solved that particular conundrum.

And yet we do have some pointers on alcohol problems (and quite probably drug issues too). We know, for instance, that women have a stronger biological reaction. The buzz of alcohol is swiftly replaced by unpleasant physical sensations, meaning that women learn to drink less. Women may also find it easier to control the desire to drink. And they may generally prefer to cope with stress in other ways. Finally, though things are changing, social pressures have strongly discouraged heavy drinking among women.

For men, on the other hand, a greater physiological tolerance of alcohol means that they can enjoy more of the stuff before experiencing the downsides. Drinking, in other words, may simply be more fun for men. And because it makes them feel good, at least in the short term, men may tend to use alcohol to deal with stress. Men also tend to be more impulsive, so they’re less able to resist the temptation to have a drink. Lastly, as we’ve just seen, traditional ideas of masculinity put alcohol in a central position: men drink.

But though all these factors might help explain the higher rates of substance abuse among men, the conventional assumption that men respond to distress by drinking and taking drugs while women get depressed and anxious doesn’t do the issue justice. As ever with mental health issues, it’s far more complicated than that.