The Stoned Age: Were cavemen on drugs? 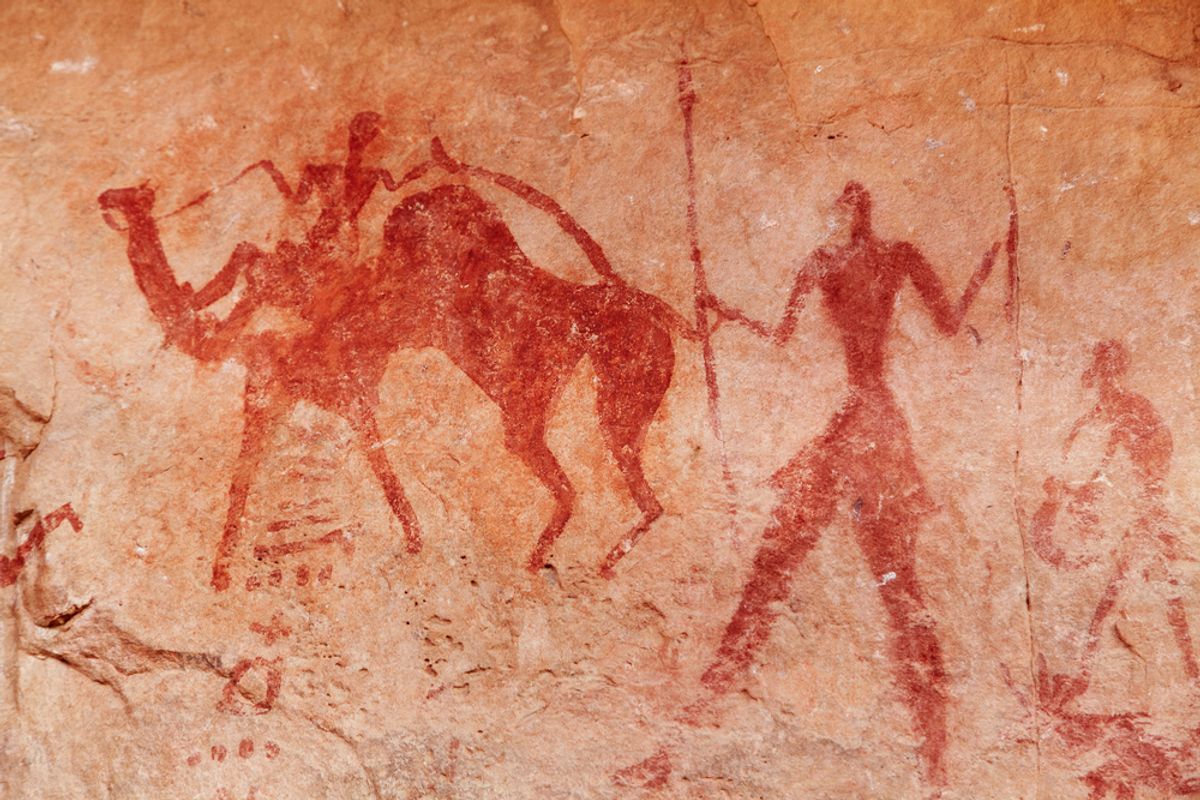 Prehistoric cave paintings across the continents have similar geometric patterns not because early humans were learning to draw like Paleolithic pre-schoolers, but because they were high on drugs, and their brains—like ours—have a biological predisposition to "see" certain patterns, especially during consciousness altering states.

This thesis—that humanity’s earliest artists were not just reeling due to mind-altering activities, but deliberately sought those elevated states and gave greater meaning to those common visions—is the contention of a new paper by an international research team.

Their thesis intriguingly explores the “biologically embodied mind,” which they contend gave rise to similarities in Paleolithic art across the continents dating back 40,000 years, and can also be seen in the body painting patterns dating back even further, according to recent archelogical discoveries.

At its core, this theory challenges the long-held notion that the earliest art and artists were merely trying to draw the external world. Instead, it sees cave art as a deliberate mix of rituals inducing altered states for participants, coupled with brain chemistry that elicits certain visual patterns for humanity’s early chroniclers.

Put another way, if Jackson Pollock could get drunk and make his splatter paintings while his his head was spinning, primitive men and women could eat pyschedelic plants and commence painting on cave walls—in part, presenting the patterns prompted by brain biochemistry but seen as having super-sensory significance.

“The prevalence of certain geometric patterns in the symbolic material culture of many prehistoric cultures, starting shortly after the emergence of our biological species and continuing in some indigenous cultures until today, is explained in terms of the characteristic contents of biologically determined hallucinatory experience,” the researchers hypothesize.

Of course, you can’t just posit that cave painters were doing prehistoric drugs without raising a few questions, such as why they gravitated—and kept gravitating—to the same kinds of shapes? The scientists start by citing decades-old research exploring drug use in indigenous cultures that suggest some hallucinations are induced by the brain seeing “neural” patterns—literally the cellular structure of brains.

“Researchers also generally claim that the geometric hallucinations experienced by the subject are mental representations of these neural patterns,” they write. “However, while these neural models are capable of reproducing some of the geometric patterns that are found in prehistoric art and non-ordinary visual experiences, their range remains severely limited.”

So brain biology plays a role, but it’s not enough to account for ancient pop art taste and trends! The brain might be generating the same kinds of patterns, but the early artist-shamans went further. Like many consciousness-exploring humans today, apparently they not only liked what they saw and created rituals to inspire their art, but they also believed that what they saw was more special than the grind of their daily lives.

“We speculate that the self-sustaining dynamics may account for why these geometric hallucinations were experienced as more significant than other phenomena, and that at the same time their underlying neural dynamics may have served to mediate and facilitate a form of imaginary sense-making that is not bound to immediate surroundings,” the scientists say.

Translated, that knotty sentence comes down to this: The cave painters had rituals that involved taking drugs (undoubtedly plants) that they consumed in a frenzy to get to this creative state. This behavior and the same results were noted by 1960s-era academics studying the effects of peyote, a hallucinogenic cactus found in North America.

“The non-ordinary visual experiences were often characterized by similar kinds of abstract geometric patterns, which he classified into four categories of form constants: (1) gratings, lattices, fretworks, filigrees, honeycombs, and checkerboards; (2) cobwebs; (3) tunnels and funnels, alleys, cones, vessels; and (4) spirals,” they write, citing peyote research. “Intriguingly, these form constants turned out to resemble many of the abstract motifs that are often associated with prehistoric art from around the world, including Paleolithic cave art in Europe.”

But why would people across continents and cultures be drawn to record the same shapes?

“Of course, it still remains to be explained why these particular motifs were highly regarded by the artists and how these people became artists capable of symbolic expression in the first place,” they write. “It makes sense to investigate whether the biological mechanisms underlying the production of these visual phenomena is amenable to an analysis in terms of Turing instabilities [a scientific name for biochemical reaction in the brain that ties it to a propensity for certain patterns].”

The paper gets very technical, but the images that are said to be generated by specific neural centers tied to images do resemble the templates for lots of 1960s poster artists, such as Peter Max and San Francisco’s psychedelic rock scene.

Why did they gravitate to these patterns? Because the imagery was seen or sensed while having a super-sensory experience and therefore seemed to be imbued with cosmic significance. Put another way, people who are high as kites tend to find magic in simple details.

“When these visual patterns are seen during altered states of consciousness they are directly experienced as highly charged with significance,” they posit. “In other words, the patterns are directly perceived as somehow meaningful and thereby offer themselves as salient motifs for use in rituals.”

The scientists admit that straighter-laced science is not quite ready for this explanation.

“Clearly, neurophenomenology is currently not advanced enough to explain the particular content of these experiences, but it does successfully explain why the experiences are characterized by such an intensely felt significance,” they write.

The paper is fascinating. For one, if it’s true—and why not?—one can posit that humanity has evolved. All one needs to do is open a book on the art from the ongoing Burning Man festivals in the Nevada desert. Much of the expression there seems to be a consequence of a deliberate process of consciousness-expanding ritual and subsequent creativity. And compared to cave walls, it’s a bit more diverse and rarified.