Since the verdict came down, angry viewers have tweeted pleas for the fictional protagonist to slay Zimmerman 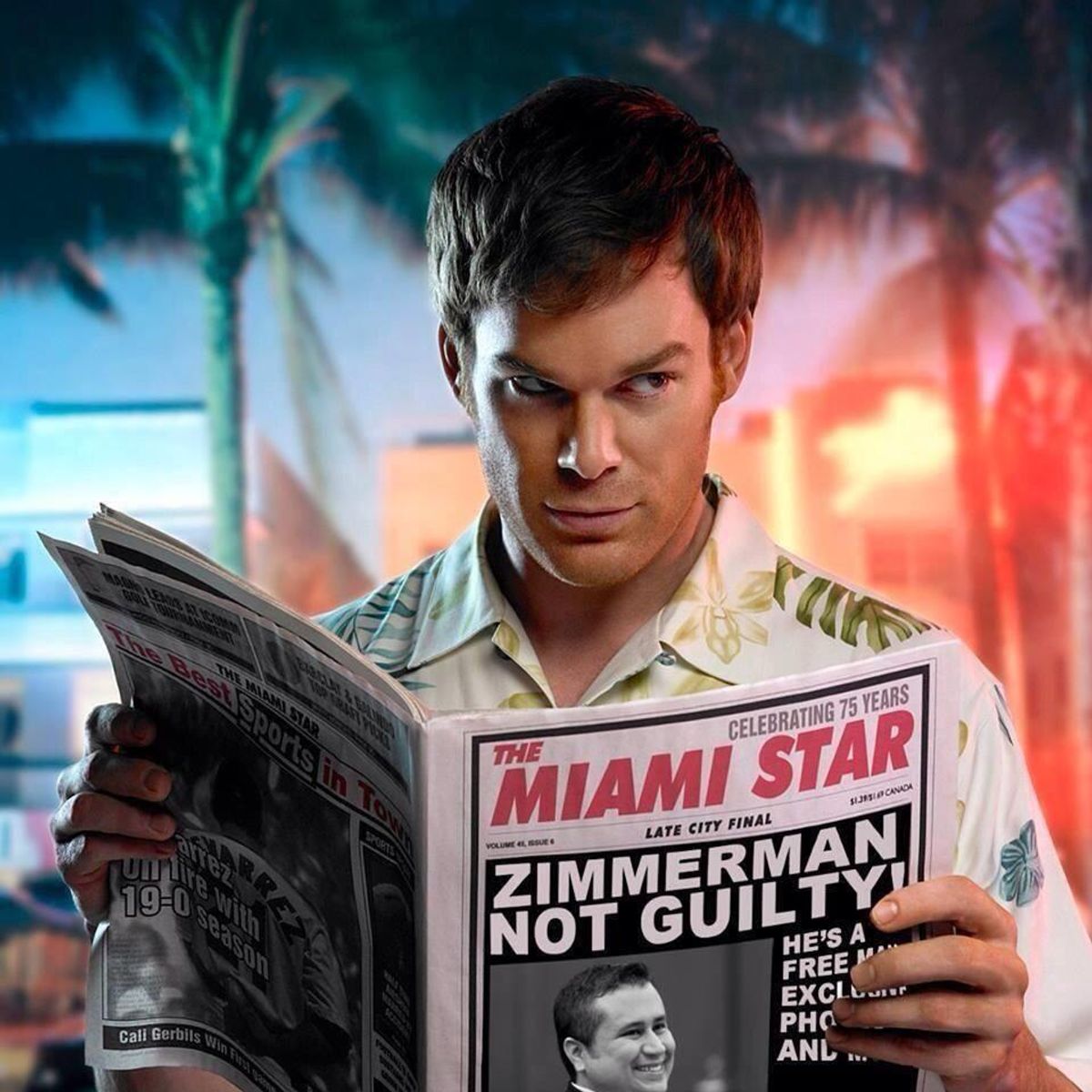 A photoshopped image of Dexter reading about Zimmerman's acquittal (dexterpodcast/Flickr)
--

Fictional worlds can overlap the real one in surprising ways, as this weekend demonstrated.

On Saturday, a Florida jury acquitted George Zimmerman of second-degree murder in the death of unarmed teenager Trayvon Martin. On Sunday, Showtime aired the third episode of the eighth and final season of Dexter, a series about a Miami psychopath who hunts and kills other killers, especially those who slip through the cracks of the criminal justice system.

Fans were quick to connect the dots, and a photoshopped image making the rounds on Twitter spelled out what they were thinking:

Some people saw the opportunity for a TV crossover:

Watch out Zimmerman...Dexter's coming for thee...

LOL, they should get dexter to kill Zimmerman

There was some disagreement, however, as to whether Zimmerman fits “The Code,” Dexter’s own (mostly) inflexible criteria for homicide—the origins and constraints of which are a frequent topic on the show, especially in the last handful of episodes.

@GammaAtheist However, if Dexter cannot get evidence to prove his guilt, a Zimmerman kill would go against his "code".

Jokes about killing Zimmerman are not funny. Besides, it doesn't meet Dexter's code. #zimmerman #J4TM pic.twitter.com/yVAmhLzKbz

The possibility of vigilante action, of course, is hardly limited to TV screens—the prosecution indeed painted Zimmerman himself as a racist vigilante in its closing, and Mark O’Mara, the lead on Zimmerman’s defense, suggested over and over that his client will live in fear of violent reprisals going forward.

O’Mara has mentioned that Zimmerman wears a bulletproof vest in public and urged his wife to do so as well. Commenting on the revelation that, following the verdict, Zimmerman will have his gun returned, he said, “Even more reason now, isn't there?”

As many have noted, the end result of Florida’s “Stand Your Ground” law in this case seems to be that murder is legal, so long as there are no witnesses to dispute your claim that the victim attacked first. So will Zimmerman have to “defend” himself with deadly force once again, now that a troubling precedent has been set?

It’s less far-fetched than your average Dexter storyline: plenty of people on Twitter have expressed a desire or plan to kill Zimmerman themselves, even posing for photos with their weapons. Dexter or no, Zimmerman may want to say goodbye for good to the Sunshine State.