"Jeopardy!" accepts "War Between the States" for "Civil War" 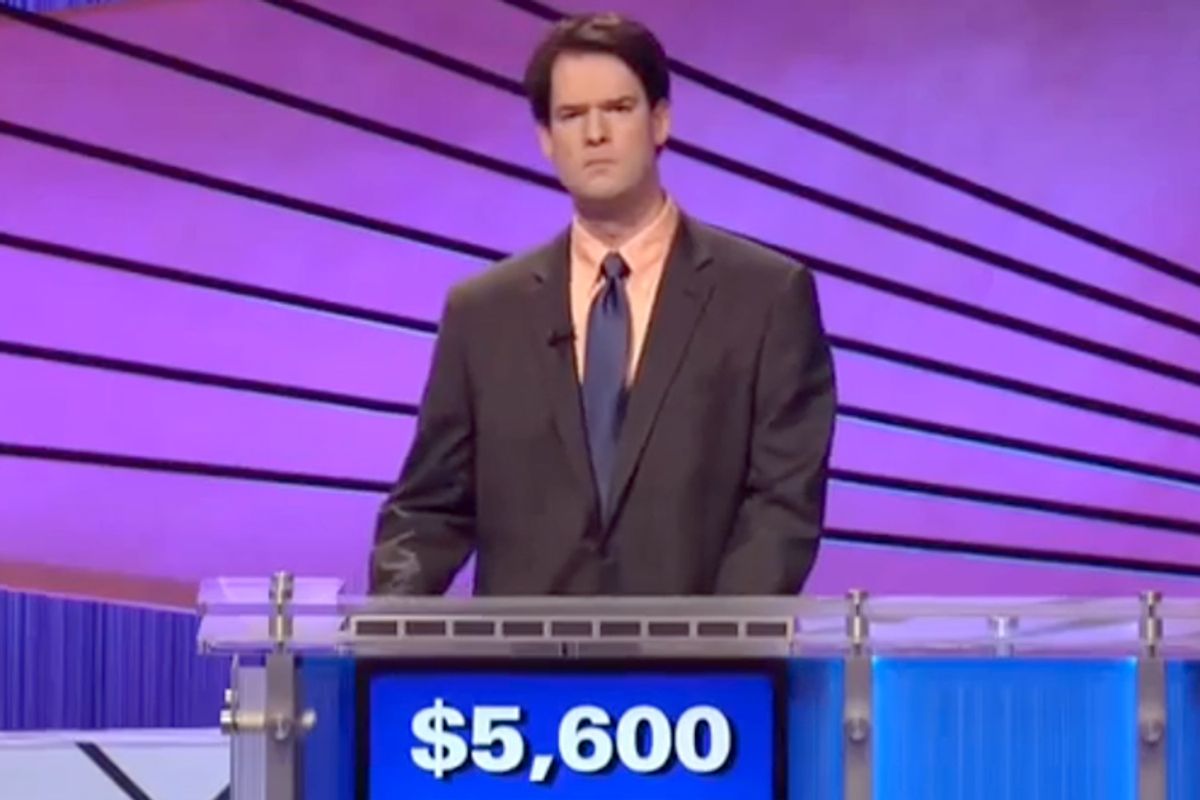 "Jeopardy!" eight-time champion Ben Ingram hails, as announcer Johnny Gilbert said at the opening of each show, from Florence, South Carolina. And evidently, the I.T. consultant is full of Southern pride.

In an episode airing last Thursday, contestants were asked the war in which David Healey's novel "Rebel Train" took place. Ingram buzzed in first and said "What is the War Between the States?" After just a moment of hesitation, host Alex Trebek accepted the answer, noting that he'd been looking for "the Civil War."

"War Between the States," accepted by Trebek, is the term preferred by many Southerners. As the website for the United Daughters of the Confederacy posits, "the term 'Civil War' is misleading and inexact. The war was not a class struggle, but a sectional combat, having its roots in such complex political, economic, social and psychological elements that it is difficult for historians to agree on all its basic causes." The "War Between the States" terminology, the site explains, is a way to acknowledge the onetime glories of the Confederate States of America, a nation that "levied and collected revenue, enlisted its armies and issued cotton bonds which were accepted in foreign commercial marts. Its navy, though small, fought brilliantly." In other words, calling the war "The Civil War" denies those who view the Confederacy as having been legitimate the idea of their state's right to have existed. No wonder "The War Between the States" is the title of a textbook that purports to tell a story free from Northern-propagated "partial truths."

This isn't the first time that politics have crept into America's favorite nonpartisan quiz show: Earlier this year, another "Jeopardy!" contestant made news on the conservative blogosphere during the Teen Tournament by claiming he hoped to restore to the Oval Office "a sense of competence and accountability." And last year, Trebek (who memorably once called a female aspiring rock journalist a "groupie" on-air) told Politico that he opposed current deficit policy: "If you want to tax high earners more, it would be nice if you told us where you are spending the money. If you are going to use our extra taxes to reduce the debt, fine. If you are going to use our extra taxes to finance new programs, whoa, let’s slow down a moment." Trebek has also donated to Republican politicians.

Though Ingram got $400 for his "War Between the States" answer, he ended up losing the game -- after eight consecutive wins -- to Mark Japinga, a legislative researcher in the Washington area and former intern for The Nation.