Our real problem is white rage

For all the warnings about supposed black riots, don't forget who exploded throughout the George Zimmerman affair 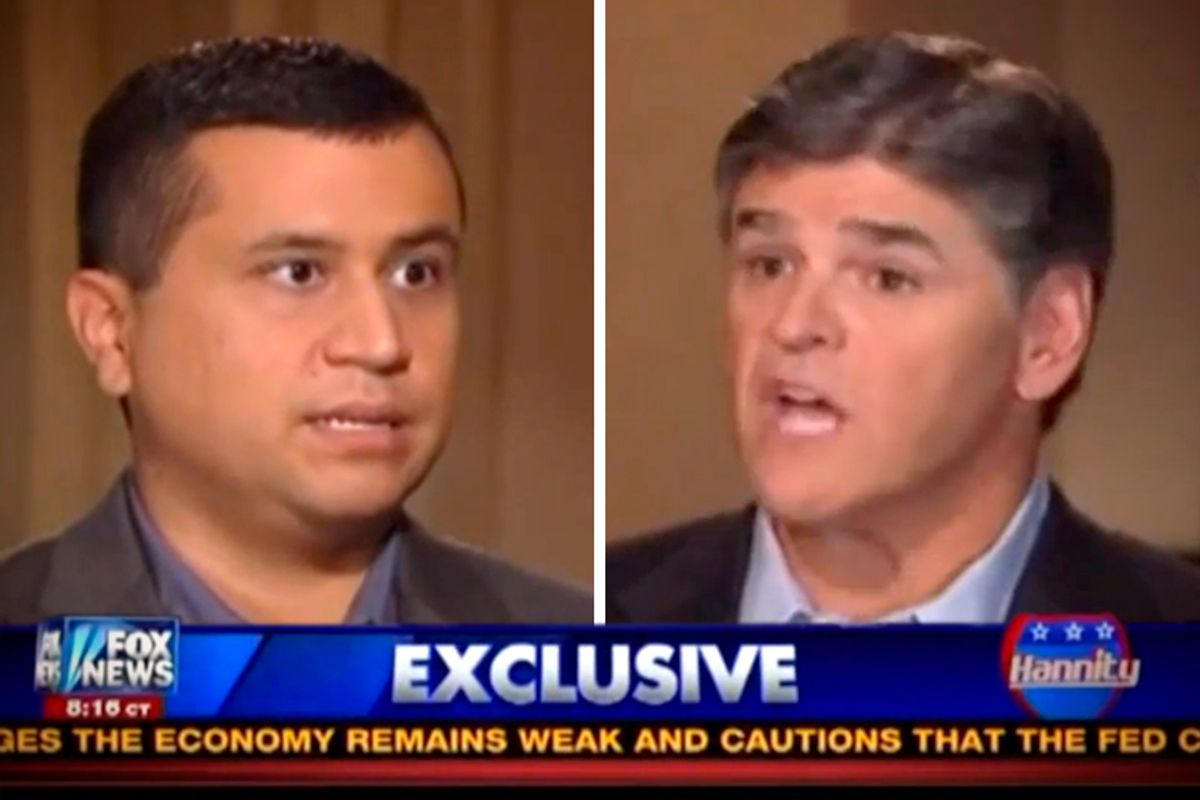 If there is no justice, there can be no peace. But in the American South it seems white folks suddenly believe that decorum and charm are a proper response to unspeakable acts of violence and unconscionable injustice.

The day before a jury delivered an acquittal in the murder trial of George Zimmerman, Seminole County Sheriff Don Eslinger and Sanford Police Chief Cecil Smith gave a national press conference to appeal for a peaceful reaction to the verdict -- regardless of its outcome.

Eslinger, who is white, said, "We will not tolerate anyone who uses this verdict as an excuse to violate the law."

The veiled threat of an aggressive police response to imaginary civil unrest belies the very logic that led to Trayvon Martin's death to begin with. For, you see, African-Americans are never protected or served by the law enforcement apparatus -- yet they are always subject to its military might.

Sanford police coyly "tolerated" the actual killing of an unarmed black child, but yet refuse to "tolerate" any anger expressed for the acquittal of his murderer.

This is the new Jim Crow realized.

It bears reminding that it was Sanford's police who first allowed Zimmerman to walk away uncharged -- his gun in tote. The story of self-defense seemed logical to them given the brown body lying on the ground. It was their decision not to investigate the case as a crime that led to public outcry, rallies and marches. It is only because of their total failure to do their jobs that the world now knows the name and face of Trayvon Martin.

The complete incompetence (or indifference) of Sanford police is why certain evidence that could have more easily convicted Zimmerman was inadmissible at trial -- the most glaring example being their failure to perform a toxicology test on Zimmerman the night he shot Martin. Had they done so, it would have revealed whether he was under the influence of either illegal substances, alcohol or the two prescriptions drugs he had admittedly been taking -- Temazepan and Adderall -- the side effects of which include hallucinations, insomnia and aggressive behavior.

Instead, Sanford police let Zimmerman walk away, quietly into the night, as he did again yesterday. But the same police now threaten a quick and forcible response to any violence perpetrated in reaction to injustice their own department has engendered.

This arrogant call to remain calm in the face of such fatal injustice reveals a basic disregard for the humanity of black people. It is this fundamental disconnect -- an unwillingness or inability to see African-Americans as fully realized human beings -- that allows whites to blindly ignore the need for equal treatment and equal justice.

It is this warped mentality that led George Zimmerman to murder an unarmed child, feel no remorse and say it was "God's plan."

Human beings are allowed to be angry. They are allowed to emote fear, love, joy, relief, pride and pain. Perhaps if the white women on this jury could see a murdered child -- as opposed to a "black" child -- they would instinctively know that Trayvon was afraid of Zimmerman, confused by this man following him in the dark, and perhaps they could intuit Trayvon screaming for his life. There is, after all, no other way to see the facts of this case -- beyond a reasonable doubt or otherwise.

But neither justice nor humanity are colorblind in the eyes of American law. The nation's sociopolitical consciousness remains plagued by a three-fifths compromise that devalues the lives of black people in general, and black boys and men in particular.

And when the criminal justice system --  in the hands, as it was, of two white defense attorneys, two white prosecutors and a mostly white jury presided over by a white judge -- choose to disregard the life of an innocent black teenager, it can hardly be a surprising result. Trayvon Martin was profiled not just by Zimmerman on the night he was killed, but by the very people charged with adjudicating justice on behalf of his senseless death.

For African-Americans this is not new. The paradox of being implicitly excluded from the guarantee of life, liberty and pursuit of happiness has been reiterated and reinforced by public policy and social malaise for centuries. President Barack Obama is not immune -- as he's become the target of incessant "white rage": race-baiting attacks, prejudice and bias even prior to his election. The Republican Party and its neo-Confederate Tea Party wing has been committed to invalidating his political and legislative legacy as much as the Zimmerman jury invalidated the civil rights of Trayvon. The disparate precedent set, therefore, becomes all the more insulting when we're told to simply shut up and bear it.

Melissa Harris-Perry, on her eponymous MSNBC show, explained this weekend that "race riots" is a biased term that dismisses the underlying calls for justice, which are often the primary purpose for protests by black and brown people. She highlighted the key fact that in America's history the worst "race riots" featured violent attacks perpetrated by whites against blacks: The Tulsa race riot of 1921 and the Rosewood, Fla., riots of 1923.

In Tulsa, a mob of armed white men charged into a black neighborhood, burning homes, killing over 300 victims and leaving an estimated 8,000 people homeless. In Rosewood, a series of lynchings escalated into hundreds of angry white rioters killing an unknown number of black citizens and leaving the entire town in waste.

Yet white rage is never articulated by America's law enforcement as a reason to fear or strategically organize against. White males aren't stopped by police in disproportionate numbers nor frisked before entering movie theaters and first-grade classrooms. But there are many angry white people out there.

The image of a threatening black male prevails in the minds of white prosecutors, juries and average citizens alike -- and the Zimmerman verdict will only serve to solidify that concept and embolden like-minded vigilantes to behave recklessly and act with impunity against the lives, bodies and souls of black folks.

African-American civil rights leaders, politicians and religious authorities have all echoed the call for calm in the wake of the verdict. But what is most confounding is the fact that a black male who chooses to riot is as likely to be met with violent and deadly force as if he were walking quietly home with Skittles and iced tea in-hand. This is the ultimate tragedy that  Zimmerman's trial has unleashed in the so-called "post-racial" age.

Black males, regardless of age, environment, lack of criminal record, activity and intent are treated as suspects, never presumed innocent. Their lives are reduced to a cautionary tale -- denied of due process and equal protection.

What words written here can suffice to argue on behalf of an innocent dead child, as his murderer walks free -- absolved by the system that failed to hold him responsible from the very beginning? The very logic that precipitated Trayvon's death and rendered jurisprudence to justify his killing reflects the misguided principles at the heart of Zimmerman's defense: that this black boy had no right to live.

How is this possible 60 years after Emmett Till's fatal demise? What progress can be gleaned from Obama's ascendance if black children can't be judged by the content of their character, instead of the color of their skin?

Trayvon Martin, and all of us by proxy, has been weighed in the balances and found guilty of his own murder. The sentence is death without parole.