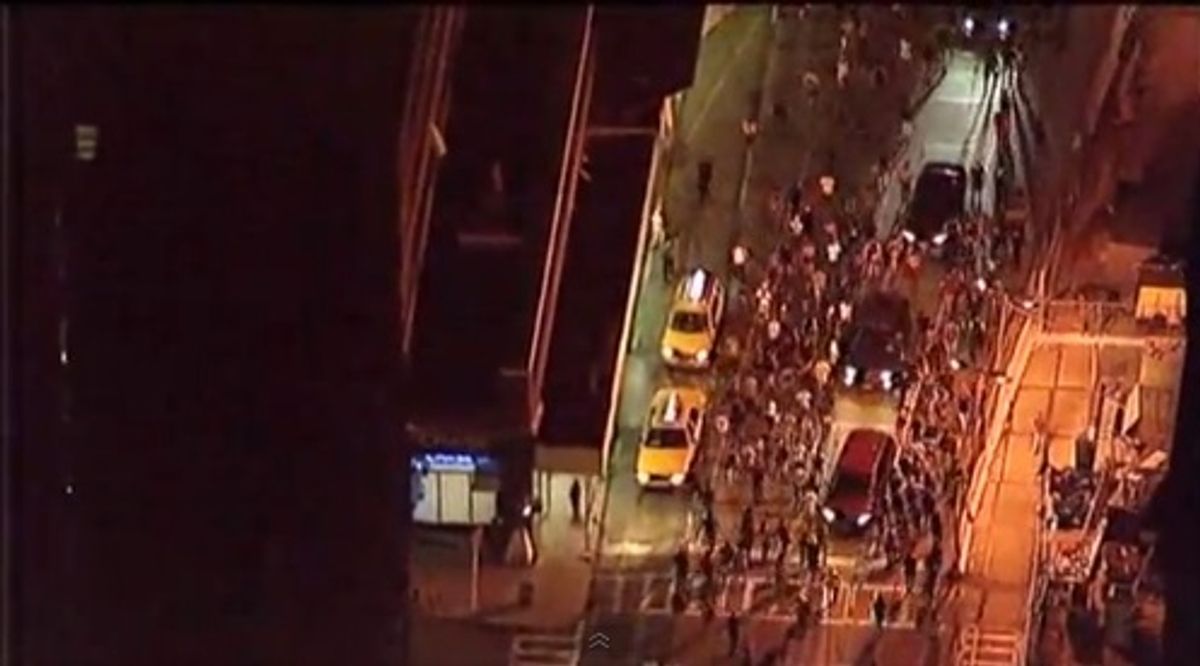 After George Zimmerman was acquitted for murdering 17- year old Trayvon Martin, President Barack Obama called for calm in a written statement: "I know this case has elicited strong passions. And in the wake of the verdict, I know those passions may be running even higher," he said. For the most part the protests that followed the verdict adhered to this spirit.

In New York, protesters gathered in in Harlem and a larger group moved uptown from Union Square to Times Square where thousands gathered. According to the New York Post, "a woman with a bullhorn climbed onto the roof of a truck near the TKTS Broadway-ticket booth and shouted “We’ve taken over Times Square! Sit down! Shut it down!’’ The paper said, "Hundreds of cops who were at the scene took a hands-off approach at first, before beginning to disperse the group at about 9 p.m."

The AP captured aerial footage of the Times Square protest:

The Daily News reported seven arrests, several of which took place on the upper east side following thrown bottles. The protesters may have been trying to reach Mayor Bloomberg's mansion.

Protestors closed down sections of I-10 in Los Angeles for about 25 minutes Sunday evening. Later on there were small protests in West Hollywood and Crenshaw. The latter, overseen by riot cops, occasionally disrupted traffic.

Police emphasized that most of the protesters were peaceful. But there have been several splinter groups from the main protest that have been more aggressive, officials said.

LAPD Cmdr. Andy Smith said some demonstrators threw rocks and D-cell batteries at police near the corner of Washington Boulevard and 10th Avenue. Police responded by firing less-than-lethal rounds at the demonstrators.

So far only one arrest has been made.

In Oakland, Calif. the Associated Press reported that the protests were more violent:

about 100 people protested, with some in the crowd breaking windows on businesses and starting small fires in the streets. As the protest wound down with the crowd dispersing, the office said that as of 2 a.m. PDT it had no word of any arrests.