The hipster racism of reality TV 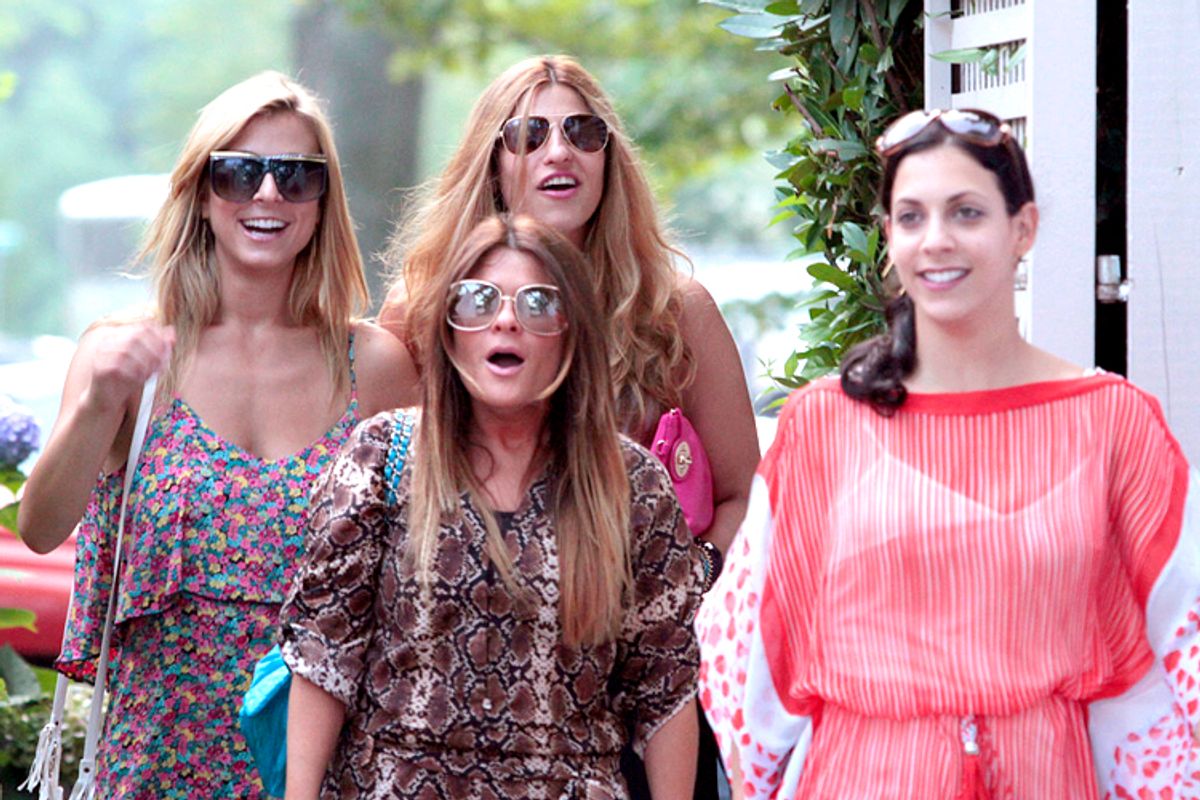 Though it never outright says so, Bravo’s “Princesses: Long Island” is clearly about that nasal-voiced, daddy-money-spending creature known in popular culture as the Jewish American Princess. The new reality show chronicles the lives of six wealthy young Jewish women whose main goal in life seems to be finding a Jewish boyfriend who will provide them with the same luxurious lifestyle that mommy and daddy have given them.

The response from the Jewish community? Nothing much more than a Larry David-style limp shrug. I myself, a Jewish American woman who has never been a big fan of JAPS, real or imaginary, felt about the same.

The Princesses are only the latest example of the increasingly cartoonish versions of women, Jews, gays and black people that reality TV producers have cooked up over the past decade. But it seems as though as the characters on these shows have become more and more offensive, we have become less and less offended.  Is it possible that the genre, by taking ethnic stereotypes to extremes, has inadvertently made us realize how dumb they are in the first place?  Or, has the repetition of these caricatures dulled our sensitivity to a creeping racism that is, well, as racist as ever?

Now the Jewish world is hardly known for its reluctance to call foul on offensive, and potentially dangerous, portrayals of Jews. Just last year organizations like the Anti-Defamation league were quick to cry anti-Semitism when Charlie Sheen when on a rant against his Jewish boss. Sheen was fired from “Two and Half Men” almost immediately. (Keep in mind that this was following years of erratic behavior and allegations of domestic abuse.)

I asked the Anti-Defamation League whether they thought the perpetuation of the anti-Semitic JAP stereotype on “Princesses” was a problem and they told me, in short, that they couldn’t be bothered. “While these shows are infantile and prurient and probably not helpful to society, we do not believe they are particularly destructive,” they said, as part of their official statement on the show.

Anna David, editor of “Reality Matters,” an essay anthology on the perverse pleasures of non-fiction television, thinks “Jersey Shore” was a turning point for both reality TV producers and the audience in terms of racialized stereotypes. When that show about a group of guidos and guidettes was first announced, numerous Italian-American organizations protested, requesting that MTV cancel it. They, of course, failed, which means that you and I both know who Snooki is and producers learned that the more exaggerated the ethnic stereotypes, the higher the ratings.

The success of  “Jersey Shore” led to knock-offs like “The Shahs of Sunset” about Persians in Los Angeles -- and “Princesses,” whose “larger-than-life characterizations of people who we can only assume in their real day-to-day life actually behave more like humans has, I think, made us all a little un-shockable,” David said.

“We all now essentially understand and accept the fact that any group of young people of a specific cultural group featured on a reality show are going to be outrageous.”

These sentiments were echoed in many responses to “Princesses” from Jewish women. In a series on the Jewish Daily Forward that I edited only one of the four contributors were offended by the show. And  Alana Newhouse, editor of Tablet and long-time JAP observer, told me that “no one is crying foul because these shows are all — to a one — exercises in minstrelsy.”

Jennifer Pozner, author of “Reality Bites Back: The Troubling Truth About Guilty Pleasure TV,” said that there are pernicious causes for and effects from this “why bother?” response to “Princesses” and the like.

“People have stopped challenging [ethnic stereotypes], because they are buying into them,” Pozner said. She sees Americans as tired of protesting caricatures, but says there's a problem with such fatigue: studies have shown that when people stop actively resisting stereotypes they start unconsciously believing in them.

Rachel Dubrofsky, a professor of communications at the University of South Florida, said that she thinks the decreased resistance to reality TV is a product of our collective belief that, in the age of Obama, we live in a post-racial society.

“The logic seems to go, since we are no longer racist, then we can now make fun of race issues and racialized stereotypes since they are no longer an issue," she explained. "The assumption seems to be that self-awareness (about race issues) absolves someone from being a racist.”

Indeed, this kind of winking hipster racism (a term coined by Carmen Van Kerckhove on Racialicious) found its way into the first episode season premiere of “Princesses.” On it, cast member Ashlee White declared, “Everybody has a stereotype of a Long Island Jewish girl.  People get so offended! I’m like, ‘Bring it.’ I’m Jewish, I’m American, and I’m a princess.”

Based on the muted response to the show among Jews, I have to assume that I was not the only Jewish American woman who, when watching this scene, felt an unexpected sense of relief. Seeing such a ludicrous version of a JAP made the stereotype somehow feel all the less threatening, as if suddenly the veil had been lifted and we could see how preposterous she really is. Surely, in the age of Sheryl Sandberg, Olympian Aly Raisman and two Jewish women on the Supreme Court, nobody could still believe that most of us are like Ashlee.

But, I soon realized, us Jewish American women are not the only ones watching the show. There are certainly viewers who aren’t regularly keeping tabs on, and in turn kvelling, over the achievements of Jewish women today. They lack the arsenal of carefully observed Sandbergs and Ginsbergs to serve as a counterpoint for the expression of Jewish femininity presented to us by reality TV. All they see are princesses.

The problem with hipster racism, as Kerckhove explained, is that our attempts to mock racism with irony and sarcasm only work to mask the prejudices and intolerances that remain embedded within ourselves and the world around us.

It’s possible that the nearly universal “meh” from the Jewish world to “Princesses” tells us that hipster racism has now spread from the way we see others to the way we see ourselves. This hipster self-hatred allows us to roll our eyes when the “princesses” shop for designer wedding gowns while single, and laugh when Shabbat becomes an excuse for drunkenness and laziness rather than contemplation. Because it's easier to issue a distancing chuckle than acknowledge the reality that, whether we like or not, this show, these people, are speaking for us.