Everyone's talking about the cover of Rolling Stone featuring Dzhokhar Tsarnaev -- but what's in the story itself? 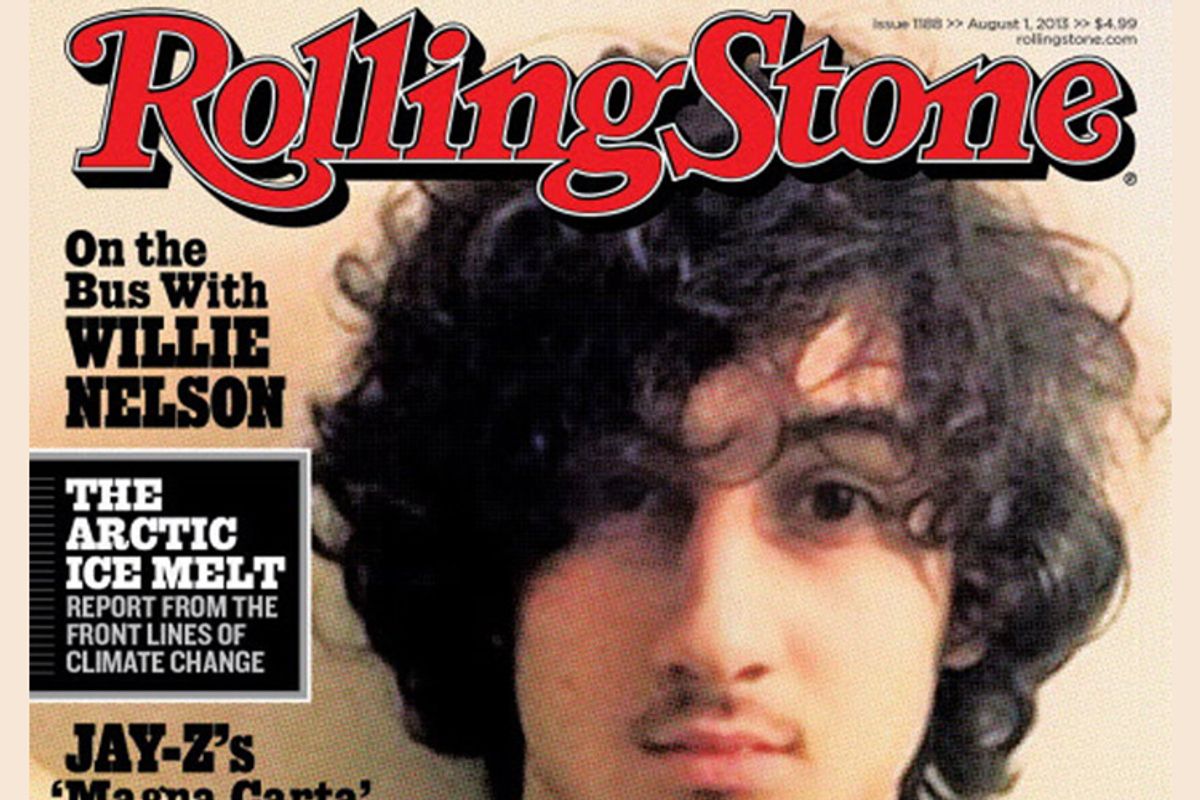 The backlash continues against Rolling Stone for its new cover, featuring a glamorized version of accused Boston Marathon bomber Dzhokhar "Jahar" Tsarnaev. But what is in the actual article, an account of Dzhokhar based on interviews with his friends and neighbors, and written by contributing editor Janet Reitman? Here are some highlights:

What the boat looked like once Dzhokhar Tsarnaev surrendered:

When investigators finally gained access to the boat, they discovered a jihadist screed scrawled on its walls. In it, according­ to a 30-count indictment handed down in late June, Jahar appeared to take responsibility for the bombing, though he admitted he did not like killing innocent people. But "the U.S. government is killing our innocent civilians," he wrote, presumably referring to Muslims in Iraq and Afghanistan. "I can't stand to see such evil go unpunished. . . . We Muslims are one body, you hurt one, you hurt us all," he continued, echoing a sentiment that is cited so frequently by Islamic militants that it has become almost cliché. Then he veered slightly from the standard script, writing a statement that left no doubt as to his loyalties: "Fuck America."

How Dzhokhar portrayed his religious beliefs to his schoolmates at Cambridge Rindge and Latin, a school well-known for its diversity:

Jahar never denied he was a Muslim, though he sometimes played it down. He fasted during Ramadan, which included giving up pot – an immense act of self-control, his friends say. "But the most religious thing he ever said was, 'Don't take God's name in vain,'" says Alyssa, who is Jewish. "Yeah," says Jackson, "he might have been religious, but it was the type of thing where unless he told you, you wouldn't know."

A few years ago, one Rindge wrestler, another Muslim, attended an informal lunchtime high school prayer group, where he spotted Jahar. "I didn't know he was Muslim until I saw him at that Friday prayer group," he says. "It wasn't something we ever talked about."

How Dzhokhar once spoke of terrorism:

"He kind of did, one time to me, express that he thought acts of terrorism were justified," says Will. It was around their jun­ior year; the boys had been eating at a neighborhood joint called Izzy's and talking about religion. With certain friends – Will and Sam among them – Jahar opened up about Islam, confiding his hatred of people whose "ignorance" equated Islam with terrorism, defending it as a religion of peace and describing jihad as a personal struggle, nothing more. This time, says Will, "I remember telling him I thought certain aspects of religion were harmful, and I brought up the 9/11 attacks."

At which point Jahar, Will says, told him he didn't want to talk about it anymore. Will asked why. "He said, 'Well, you're not going to like my view.' So I pressed him on it, and he said he felt some of those acts were justified because of what the U.S. does in other countries, and that they do it so frequently, dropping bombs all the time."

How Dzhokhar spoke of his brother, Tamerlan, who was killed in a shootout with police after the bombings, to his friends:

"All I know is Jahar was really wary of coming home high because of how his brother would react. He'd get really angry," says Will. "He was a really intense dude."

"And if you weren't Muslim, he was even more intense," says Sam, who notes that he never met Tamerlan in person, though he heard stories about him all the time from Jahar. "I was fascinated – this dude's, like, six-three, he's a boxer – I wanted to meet him," says Sam. "But Jahar was like, 'No, you don't want to meet him.'"

How some of Dzhokhar's friends have dealt with his arrest:

Like so many of his fans, some of Jahar's friends have latched onto conspiracy theories about the bombing, if only because "there are too many unanswered questions," says Cara, who points out that the backpack identified by the FBI was not the same color as Jahar's backpack. There's also a photo on the Internet of Jahar walking away from the scene, no pack, though if you look closely, you can see the outline of a black strap. "Photoshopped!" the caption reads.