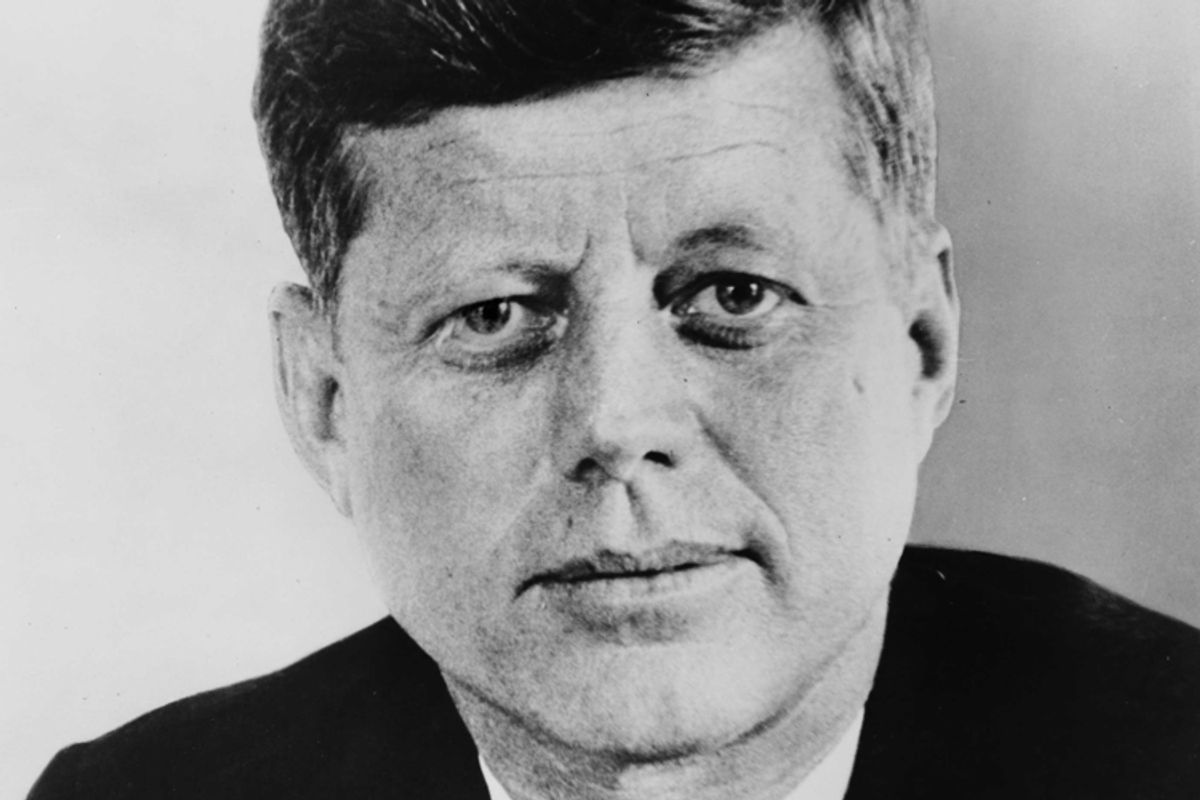 Few presidents have been as religiously observant yet reluctant to discuss their faith. He never raised the subject with [advisor Ted] Sorensen, leaving him wondering if his attendance at mass was motivated by “political necessity.” But he would banter about religion with Jackie’s dressmaker Oleg Cassini, once telling him, “I’d better keep my nose clean, just in case He’s up there,” and scolding him for questioning Papal infallibility, saying, “The weakness of man should not weaken the image of God.” Jackie insisted that he had not been an atheist or an agnostic, and “did believe in God,” but sometimes wondered if his bedtime prayers and faithful attendance at Mass was a way of hedging his bets. “If it [the afterlife] was that way,” she said, “he wanted to have that [his adherence to Catholic ritual] on his side.”

Sometimes one could glimpse his faith. During his first congressional campaign he astonished his aide Mark Dalton by impulsively ducking back into a church where they had just attended Mass so he could light a candle for his deceased brother. He was sensitive about being the first Catholic president and avoided public displays of piety, but when he attended Mass at the Basilica of the Virgin of Guadalupe during a 1962 visit to Mexico City his emotions trumped his political caution. As Jackie brought a bouquet of red roses to the altar he was so overcome that he crossed himself and the congregation to burst into applause. While recuperating in Palm Beach from a 1955 back operation that had almost killed him, he jotted down some ideas for Profiles in Courage, including this passage from Job, “Oh that one would hear me! Behold, my desire is that the Almighty would answer me.” A tense 1961 summit with Soviet Premier Nikita Khrushchev in Vienna left him so shaken that on the plane returning to Washington he scribbled, “I know there is a God–and I see a storm coming; If He has a place for me, I believe I am ready,” a quotation he often used in campaign speeches and attributed to Abraham Lincoln. (Evelyn Lincoln found the paper on the floor of Air Force One and squirreled it away with the other notes and doodles that she was constantly rescuing from wastebaskets.) That fall, after the Berlin crisis had cooled, he had slipped out of the White House on National Prayer Day and sat alone in a rear pew at Washington’s St. Matthew’s Cathedral, leading Hugh Sidey of Time to note, “To many who had watched him [Kennedy] through nine months of crisis, it seemed that his church attendance and the reference in his talks to prayer had become less mechanical and more meaningful.”

A Secret Service agent woke him at 2 a.m. to report that Patrick was struggling again. As he hurried to the elevators the nurses in the corridor looked away. He saw a severely burned infant in one of the wards and stopped to ask a nurse for the name of the child’s mother so he could send her a note. Holding a piece of paper against the ward window, he wrote, “Keep up your courage. John F. Kennedy.”

For the next several hours he sat on a wooden chair outside the hyperbaric chamber, wearing a surgical cap and gown and communicating with the medical team by speaker phone. Near the end they wheeled Patrick into the corridor so he could be with his father. When the boy died at 4:19 a.m. Kennedy was clutching his little fingers. After saying in a quiet voice, “He put up quite a fight. He was a beautiful baby,” he ducked into a boiler room and wept loudly for ten minutes. After returning to his room he sent [special assistant Dave] Powers on an errand so he could cry some more. He broke down outside the hospital and asked an aide to beg a photographer who had captured his grief not to publish the picture.

His eyes were red and his face swollen when he arrived at Otis that morning. As he described Patrick’s death to Jackie, he fell to his knees and sobbed.

Lincoln called Patrick’s death “one of the hardest blows” he had ever experienced. Sorensen thought he was “even more broken” than his wife. Jackie said afterwards, “He felt the loss of the baby in the house as much as I did,” and noticed him tearing up when he held John. His tears were all the more astonishing given that Joe Kennedy had often told his children, “There’ll be no crying in this house.” They shortened it to “Kennedys don’t cry,” repeated it to their children, and according to Ted Kennedy, “All of us absorbed its impact and molded our behavior to honor it. We have wept only rarely in public.”

Some of Kennedy’s friends believed that he grappled with such powerful feelings that he was afraid of them surfacing. Laura Bergquist sensed that “under his cool cat exterior, there was a reservoir of emotion,” and Ormsby-Gore detected “deep emotions and strong passions underneath,” adding that “when his friends were hurt or a tragedy occurred or his child died, I think he felt it very deeply. But somehow public display was anathema to him.” Ormsby-Gore compared him to Raymond Asquith, the brilliant son of British Prime Minister Herbert Asquith who been killed in the First World War. In Pilgrim’s Way, one of Kennedy’s favorite books, John Buchan wrote about Asquith, “He disliked emotion, not because he felt lightly but because he felt deeply.”

Excerpted from "JFK's Last Hundred Days: The Transformation of a Man and the Emergence of a Great President." Reprinted by arrangement with The Penguin Press, a member of Penguin Group (USA) LLC, A Penguin Random House Company. Copyright © Thurston Clarke, 2013.