9 former public servants raking in cash on the speech circuit 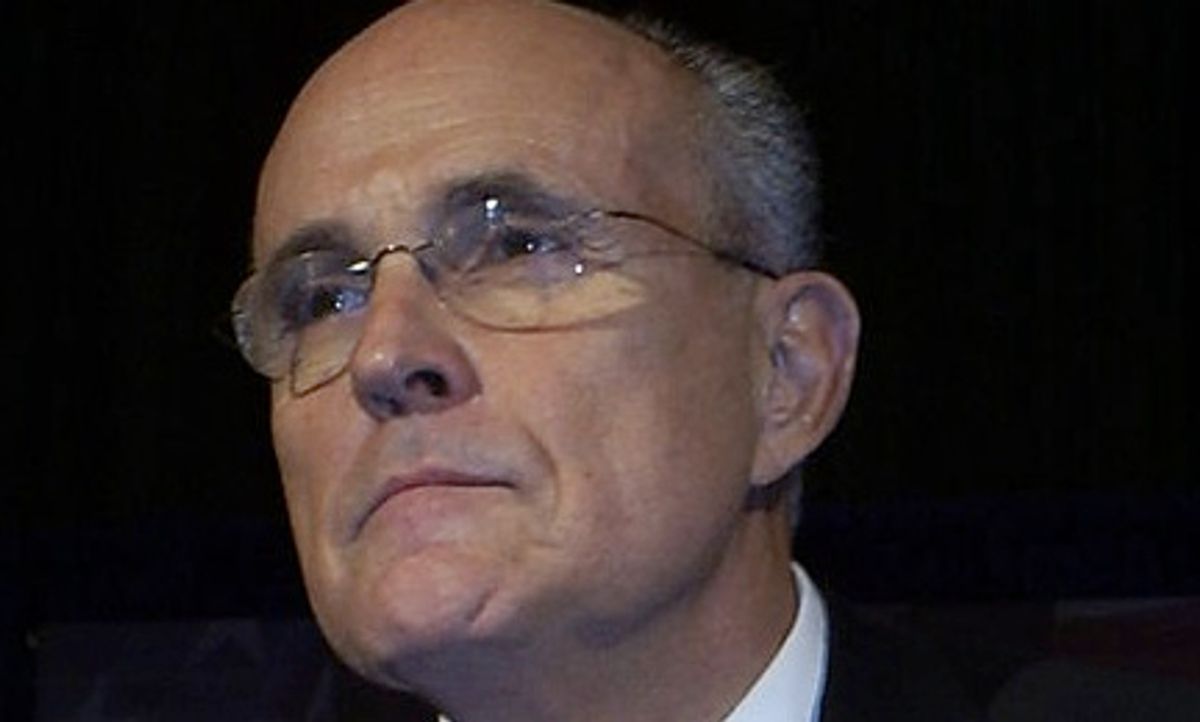 The swamp of monied interests that can influence politicians and public servants is thick with campaign funders and armies of lobbyists. But there’s a way to reach office holders that’s even easier to pull off, a snap to conceal, and carries few consequences: It’s called “buckraking,” otherwise known as taking giant fees for speaking once you’ve left office.

There is a long-held tradition that public officials who accept ginormous fees for speaking engagements from industries connected to their work are both unethical and unseemly, and rules prohibit sitting lawmakers from cashing in. But hey, if you’ve left office, what the biggie? It's difficult to determine exactly how the prospect of future payments may sway legislative outcomes for politicians, but it certainly makes you wonder. If you think that down the road you can get a big payout from, say, financial firms for looking kindly upon them in office, well, maybe that's just what you'll do.

In our current redux of the Gilded Age, any delicate concerns about impropriety are certainly not stopping politicial heavies. The A-list can earn hundreds of thousands of dollars per speech, and many of them are cleverly setting up complicated, deliberately opaque corporate structures that enable them to hide how much money they’re taking in. Even lesser entities, like former White House press secretary Robert Gibbs, can expect handsome payments. Gibbs has reportedly made a cool $2 million for talks since leaving his position in 2011.

The people on the following list are so hypnotized by Mammon that any sense of discretion, proportion, or protecting their legacy and reputation has been tossed out the window. Is their buckraking a form of legal bribery? You decide.

1. Bill Clinton: The former president is considered the grand champion of buckrakers, earning esteem among fellow speechifyers for his cleverness, deft maneuvering, and ability to haul in breathtaking sums. Rivals can only salivate when they hear that Bubbah, as Leslie Larson reported in the New York Daily News, recently got paid $500,000 in advance for a 45-minute speaking gig at the 90th birthday soiree for Israeli President Shimon Peres. That’s $11,000 per minute, Larson observed.

And even that windfall didn’t match the $750,000 payout he got from speaking to the Swedish-based telecom giant Ericsson in Hong Kong. Or the $700,000 he received from a newspaper publishing company in Lagos, Nigeria. As president, Clinton allowed Wall Street to run roughshod over the American public, and so it’s no surprise that business forums, big banks, and financial institutions clamor to return the favor by hiring him for lucrative speaking jobs, including Goldman Sachs, Lehman Bros, Citigroup, and Deutsche Bank. Clinton has raked in an estimated $89 million in speaking fees since he left public office. We only know this because his wife's position as a high-ranking federal official required him to disclose the dough.

2. Hillary Clinton: Taking a page from her husband’s playbook, the former Secretary of State has leapt onto the speaker circuit gravy train with such enthusiasm that the New York Times and the Washington Post just ran feature stories on her epic buckraking. As Amy Chozik of the Times reports, “For about $200,000, Mrs. Clinton will offer pithy reflections and Mitch Albom-style lessons from her time as the nation’s top diplomat. ('Leadership is a team sport.' 'You can’t win if you don’t show up.' 'A whisper can be louder than a shout.')"

Such pablum is worth high dollar to organizations like the American Society of Travel Agents and the National Association of Realtors, as well as to private equity managers and business honchos. Given the possibility of a 2016 presidential run, such blatant cashing in may have costs, but it looks like Clinton is betting that getting her message out to crowded auditoriums and taking in a king’s ransom to do so is worth it. She’s used her speech gigs to talk about immigration reform, foreign policy, healthcare, and other issues. Is it a conflict of interest? Not, as the Post points out, if you consider Clinton getting huge sums speaking to audiences with, oh, millions of dollars at stake in federal tax policies and such to be just another friendly chat.

3. Tony Blair: The former British Prime Minister has taken buckraking to new levels of greeds and sleaze. Ken Silverstein reported in the Atlantic that since leaving office in 2007, Tony Blair has transformed himself into a “human cash register,” pulling down millions speaking to everyone from Central Asian dictators to megabanks and has soaked up $30 million from giving speeches and consulting with governments and corporations. JPMorgan Chase alone forks over $4 million a year to Mr. Blair, and the All American Speakers Bureau, one of the agencies that lands him the gigs, lists his minimum speaking fee as $200,000. Silverstein notes that Donald Trump makes only half as much for giving talks. Meanwhile, Blair collects a pension which costs his fellow Brits $250,000 per year.

4. Tim Geithner: As I recently pointed out, former Treasury Secretary Tim Geithner barely let the seat get cold in his office before getting into the buckraking game. In both his offices at the New York Fed and the Treasury, Geithner was ever-eager to put the interests of giant, destructive banks over the public interest, and the banking world is eager to show him their appreciation. In the six months since he left Washington, Deutsche Bank paid him $200,000 to speak at a conference, and private equity groups Blackstone and Warburg Pincus have forked over $100,000 each for recent speaking engagements.

5. Erskine Bowles: Since the financial crisis, former White House chief of staff Erskine Bowles and his partner-in-crime Alan Simpson, former senator from Wyoming, have been pushing their discredited austerity agenda which accomplishes the joint purpose of screwing the public out of things like Social Security while lining the pockets of financiers and the 1 percent. Bowles nevertheless finds ample time to work the speaker circuit, hauling in $40,000 a pop. (David Dayen notes that this is three times as much as you'll likely get from Social Security in retirement per year.)

Bank of America and Manhattan investment groups have ponied up, eager to hear how Bowles’ deficit fear-mongering will translate into big money for them while shrinking the public sector and putting the squeeze on ordinary Americans. Check out Bowles’ page on the Washington Speaker’s Bureau website, which touts him as a businessman who knows how to further the interests of the wealthy: “A successful businessman who leveraged his experience in the private sector to control spending in the public sector.” Bowles’ own spending is undoubtedly much enhanced by his buckraking prowess. No belt-tightening for him!

6. Rudy Giuliani: The former New York mayor is no stranger to the speaker circuit and is eagerly fattening his bank accounts since we last saw him in office. According to the Washington Post, Giuliani submitted a financial disclosure report when he was still on the presidential campaign trail in 2007, which revealed a whopping total $9.2 million earned for speaking fees 13 months. MSN reported that his highest-paid event was at a private equity firm, Sage Capital Group, in 2005, which earned Giuliani $270,000. During the Occupy movement, Giulianisneered at the idea of regular people protesting Wall Street predation, and boasted that he would have "booted" the protesters on day one. Perhaps such public braying enhances his speaker fees from a certain appreciative sector.

7. George W. Bush: According to Yahoo News, former president Bush has taken in around $110,000 per speech since leaving office. He doesn’t quite match Bill Clinton in the Cashing In Olympics, but he’s still piled up at least $15 million since vacating the White House in 2009. According to Peter Stone at the Daily Beast, Bush could not make time in his schedule to speak at Ground Zero in New York after Osama bin Laden was killed, but he was certainly free the very next week to collect big bucks for “three separate speeches to hedge-fund executives, a Swiss bank sanctioned for keeping secret bank accounts, and a pro golf event underwritten by the accounting firm involved in the Tyco International financial scandal.” Among his more illustrious venues, Bush was keynote speaker at a regional conference at Morongo Casino Resort & Spa in June. Here’s betting he made a tidy sum on that one.

8. Sarah Palin: Former Alaska governor and vice-presidential candidate Sarah Palin has always had a keen sense of where the money is, and in her heyday, she commanded over $100,000 just for opening her mouth at a college you have probably never heard of. As Politico has revealed, Tea Party groups have handed over large sums to Palin, which is understandable considering her unwavering endorsements of their agenda. However, lately Palin has experienced a drop in popularity and her speaking fees have plummeted. In fact, she recently was obliged to pay her own travel expenses to speak for free to — egads! — a high school.

9. Colin Powell: It’s a tough job, but somebody has to do it. Colin Powell, who is always reminding us of his qualities of dignity and integrity, rakes in up to $200,000 a hit on the speaker circuit. According to BusinessWeek, Powell, the first African-American Secretary of State and chairman of the Joint Chiefs of Staff, has spent his time since office serving on various corporate boards, including AOL's, and collecting stratospheric speaking fees. Powell is famous for speeches, including a certain one he made at the U.N. in support of the Iraq war. That one didn't turn out too well for his reputation, but it doesn't appear to have reduced his ability to cash in.

Lynn Parramore is an AlterNet senior editor. She is cofounder of Recessionwire, founding editor of New Deal 2.0, and author of 'Reading the Sphinx: Ancient Egypt in Nineteenth-Century Literary Culture.' She received her Ph.d in English and Cultural Theory from NYU, where she has taught essay writing and semiotics. She is the Director of AlterNet's New Economic Dialogue Project. Follow her on Twitter @LynnParramore.