You need a smart watch

The Pebble, which notifies you of incoming calls, texts and emails, is proof you really can use one more gadget 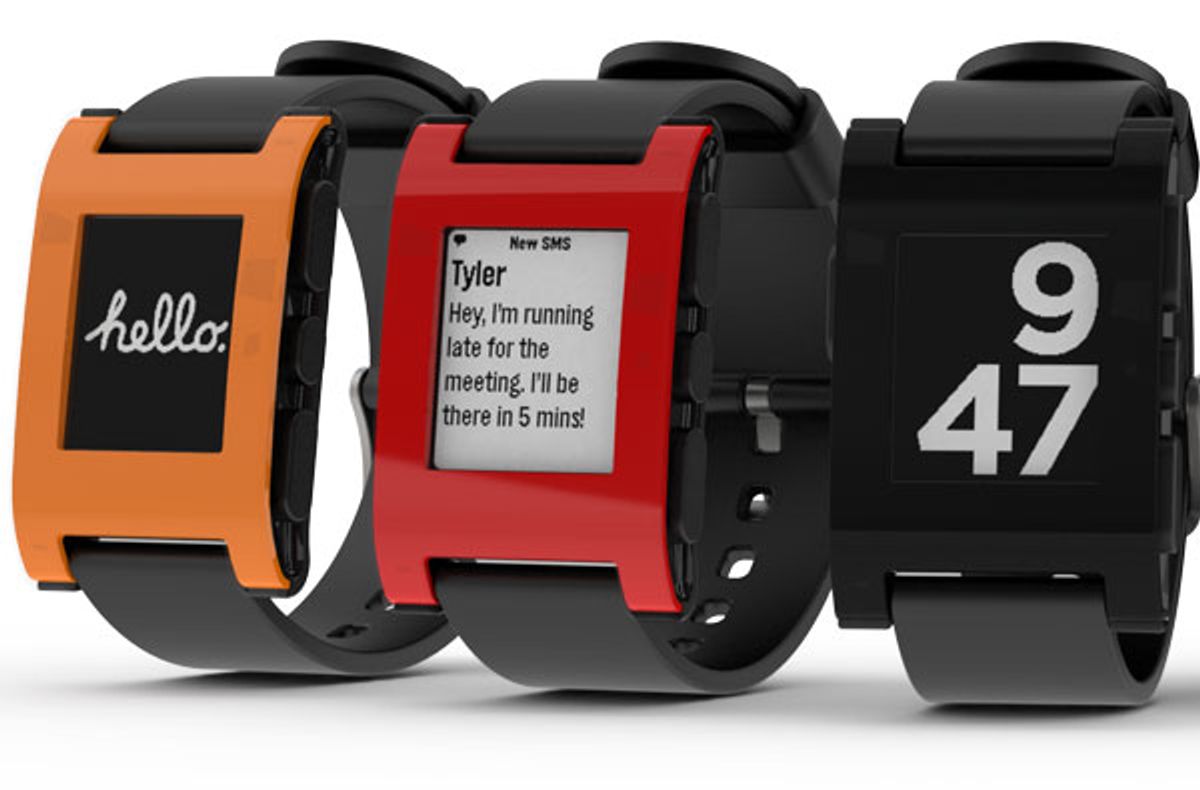 NEW YORK (AP) -- You have a cellphone, maybe a tablet. Sometimes you lug around a laptop. Do you really need one more gadget on you?

Yes, you do. You need a smart watch. At least, that's what I learned after I got the Pebble, a $150 watch that connects wirelessly to iPhones and Android smartphones to notify you of incoming calls, texts and emails.

The Pebble has a lot of rough edges, but it does a good job of demonstrating the potential of "wearable" computing. Apple has filed patents that demonstrate it's working on a watch, and other "smart" watches are proliferating.

The Pebble has impeccable underdog credibility as the brain child of a 26-year-old Canadian entrepreneur who struggled to find money to make it until he posted his project on the fundraising site Kickstarter. There, it was a runaway success, raising more than $10 million in less than a month from nearly 70,000 friends and strangers.

What's great about the Pebble isn't that it's particularly smart on its own. Considering that it's a watch with the processing power of a cellphone from 2008, it really doesn't do much out of the box. In fact, it does less than many sports watches; you can set alarms, but it doesn't come with a timer.

The watch qualifies as a "smart" device because you can download and install applications, such as a timer. So far, the apps are pretty rudimentary. Apart from the timer, the only app I bothered to install is one that walks you through a popular seven-minute workout routine.

The Pebble's real use is as an extension of the smartphone, a replacement for the ring signal.

Think about it: how many times have you missed calls and texts because the ringer was off, and you didn't feel the vibration because the phone wasn't on you? Or you forgot to turn the ringer off, and it rang at the wrong time? These things used to happen a lot to me. The Pebble put an end to that.

When you get a call, text, email or calendar reminder, the Pebble vibrates. You can set it to provide you with Facebook notifications, too. Because it's strapped to your wrist, it's a signal you can't miss, yet it's unnoticeable to anyone else. After a few days, I turned off the cellphone's ringer and vibrating alert - and left them off. The Pebble's vibrating alert was right for every situation.

The Pebble also gives me the freedom to distance myself from the phone. Rather than carrying the bulky thing in my pocket so I could feel it vibrating, I leave it in my bag. At home, I leave it on the charging stand in the foyer.

The Bluetooth wireless connection between the phone and the watch works fine throughout my small New York apartment. The company says the range is 20 to 30 feet. It worked at longer distances in my test, but I wouldn't count on it maintaining a connection throughout a multilevel home.

The Pebble doesn't work flawlessly with every phone, so buyer beware. It worked fine with a Kyocera Torque, a Samsung Galaxy Nexus and a Motorola Razr M. All of them use Google's Android software. With a fourth Android phone, the HTC One, the connection to the watch dropped many times a day, and it wouldn't reconnect automatically once it dropped. That made the Pebble pretty useless. A colleague tested the watch with her iPhone 4 and found that while it maintained the connection fine when the watch and phone were close by, it wouldn't reconnect automatically if they got separated and then reunited. That was annoying.

With the right phones, the only thing I had to worry about was turning off the connection between the phone and the watch at night, so it wouldn't buzz me in bed with incoming email. Yes, I've actually started wearing the watch to bed. The vibrating alarm wakes me up without disturbing anyone else in the room, and I never have to fumble for the alarm on the nightstand.

If every buzz from the watch sent me scrambling for my phone, the setup would be pretty annoying. But the watch's stamp-sized screen shows the first few lines of every incoming message, or the name and number of the caller, so a glance at the watch reveals if the message is one to ignore or get on quickly. You still have to fish out the phone to reply, though. The watch has only four buttons, and there's no way to type on it.

The watchmaker calls the black-and-white screen "e-ink." That sounds like it's a paper-like display of the kind found on Amazon's monochrome Kindle e-readers, but that's not the case. The Pebble screen is a liquid-crystal display that doesn't need a backlight to be legible in indoor or outdoor light, which helps save battery power. There is a backlight that kicks in whenever a button is pushed, so the watch face is legible in darkness, too.

You can pick from a dozen digital watch faces and flip between them using the watch buttons. Some of them are more amusing than useful, such as one that shows the time in binary numbers. Some are animations of analog faces. One shows 4:20 written out as "four twenty."

What's baffling - and a major downside to the Pebble - is that none of the watch faces have the basic indicators we expect from a smart device: whether it's connected and whether it needs charging. You need at least five button presses to reveal the connection status. One press will get you to a battery indicator, but it will only tell you if you battery is low. It doesn't tell you when it will die.

The battery lasts for about a week, but there's plenty of variability, so I wouldn't be comfortable just setting a reminder to recharge the watch every Monday. The manufacturer says a full charge takes about two hours, but if you're not keeping track of the time, the watch doesn't help you: It doesn't tell you when the battery is full so you can stop charging.

The battery life is bit disappointing. Six years ago, I tried a Sony Ericsson watch that connected to a phone and lasted three weeks on a charge. But the unit weighed nearly half a pound because of its big battery and metal body, and it had only a one-line digital screen. The rest of the face was given over to an analog display. Overall, it was far less useful, and the weight made it uncomfortable. Today, there's a competing smart watch called the Cookoo that claims to last a year on a button cell battery because it takes full advantage of a new low-energy Bluetooth technology.

The Pebble is light but chunky. It's thick enough that it gets caught in tight shirt cuffs, and it looks odd on a narrow wrist, like most women have.

The "lens," the watch's window pane, is made of tough plastic. It's not as hard as the glass covers of top smartphones and watches, and it took me just two weeks to scuff it, though the damage was hardly noticeable.

It's rare for a new type of gadget to find a place in my life, but the Pebble did just that. I'm hoping it will improve through software updates, but if it doesn't, it's still a keeper - at least as long it works with the phone I'm using.

With more smart watches on the way, the Pebble is a good portent for the field - a sign that computing can get even more useful if it gets close to our skin. A lot of people have gotten out of the habit of wearing watches and use their phones to tell the time instead. The Pebble demonstrates that there's still life in the watch, when it works with the phone.