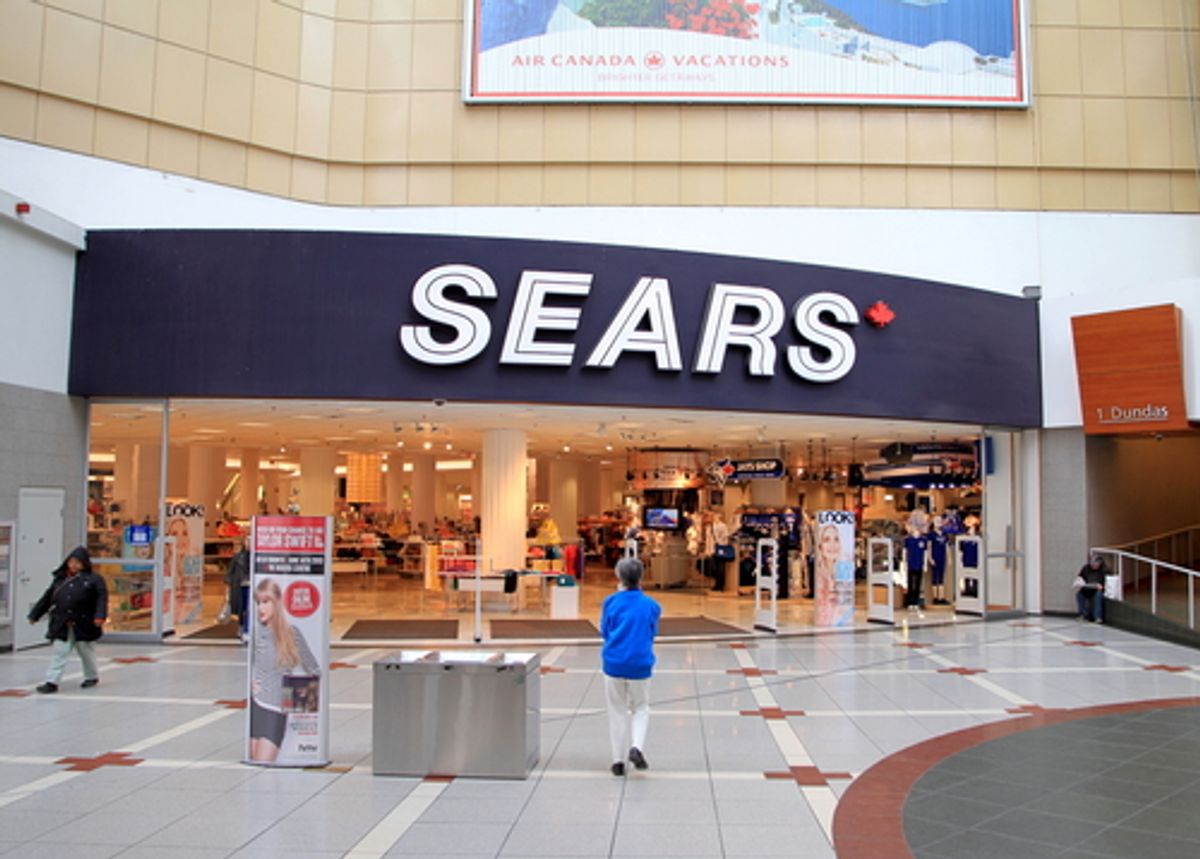 Eddie Lampert, the legendary hedge fund manager, was once hailed as the “Steve Jobs of the investment world” and the second coming of Warren Buffett. These days, he claims the number 2 spot on Forbes’ list of America’s worst CEOs. He has destroyed Sears, the iconic retail giant founded in 1886, which used to be known as the place “Where America Shops.”

America now avoids Sears at all costs, thanks largely to Mr. Lampert and his love of twisted economic logic.

A bit of background: Lampert cut his teeth on Wall Street at the risk-arbitrage desk of Goldman Sachs under Robert Rubin, who later became U.S. Treasury Secretary and now serves as vice chairman at Citigroup. In 1988, Lampert founded ESL Investments and joined the billionaire's club at age 41. He rose to fame in the early 2000s for seizing control of Kmart during bankruptcy and then using it to take over Sears. Along the way he was kidnapped and deposited on a motel toilet in handcuffs for nearly 40 hours, and lived to tell the tale. Lampert is known for his touchiness and odd habits, such as conducting meetings from a bare bones room to Sears executives forced to tune in by videoconference. He hates flying.

You might say that Lampert is the distillation of the fervent market worship and wrong-headed economic approaches that came to dominate the U.S. in the 1980s and have yet to run their fatal course. He adores Ayn Rand, and is reported to have given out copies of Atlas Shrugged during an ESL annual dinner. Lampert is also a fan of Friedrich von Hayek, the Austrian economist beloved by conservatives and libertarians. As a Robert Rubin protégé, he absorbed the lessons of a man whose discredited economic focus on budget deficits ended up starving the country’s infrastructure, education and alternative energy.

Looking at what Lampert has done to Sears, we can see what happens when the lessons of his mentors are actually applied in the real world. It isn’t pretty.

William Lazonick, an expert on the American business corporation, has written about the rise of the conglomerate movement of the 1960s. At the time, shareholders were clamoring for rapid growth, so they pushed for big mergers and acquisitions. Once-successful firms were pressured to move away from their core businesses, often to terrible effects.  In an email to me, Lazonick noted that “the ideology was that a good manager could manage anything, and that all the central office needed was performance statistics so that it could ‘manage by the numbers’." This foolishness "imploded," as Lazonick put it, in the 1970s.

Evidently Lampert didn’t get the memo. In the 1980s, as deregulation got the casino games rolling on Wall Street, mergers and acquisition fever once again took hold. This time around, mergers more often involved acquisitions in the same industry, like Bristol Meyers' acquisition of Squibb. Two new terms entered the American vocabulary, the “hostile takeover” and the “corporate raider.” Oliver Stone made a movie about this episode called Wall Street.

Some refer to Lampert as a corporate raider. He prefers the term “active investor.” It must be admitted that Lampert wasn’t only interested in stripping the assets of his retail giant to make a fortune off it right away. He thought he could increase profits, too. After making a nice wad of cash from Kmart by selling off the valuable real estate sitting under dozens of stores, shutting down 600 stores and laying off tens of thousands of workers in the name of cost-cutting and thereby jacking up the stock price, he got bigger ideas. He would use Kmart to take over another ginormous retailer, Sears.

What background did Lampert have in retail? None at all. But never mind that. He was a Wall Street genius, and he would make this thing work by harnessing the power of data and numbers and letting the invisible hand of the market guide his Franken-company to glory. He even hired Paul DePodesta, the statistician of "Moneyball" fame, to advise him. When Kmart acquired Sears, the new company, Sears Holdings, became one of the largest retailers in the U.S., and Lampert became its CEO. He took on the Herculean task of integrating two vastly complex companies. And he brought on a guy that knew all about restaurants and nothing about retail to help him, Aylwin Lewis, former president of YUM! Brands.

Reactions ranged from surprise to predictions of doom. Mark Tatge atForbes called him “Crazy Eddie” and decided that he must be planning to liquidate the whole shebang, perhaps slowly, by dumping stores (Sears owns a ton of valuable real estate) and using the money to do stock buybacks (more on that later) that would further enrich him.

It turns out that contrary to Lampert’s notion, you actually do need to know something about a business in order to manage it well. There’s really no substitute for industry-specific experience. And bigger is not always better — a gigantic corporation can be too unwieldy and complex to thrive, especially when your management philosophy is derived from a writer of bad novels.

Sears and Kmart are now on well on their way to becoming vaporized as brands.

2. Myth: Self-interest is the greatest virtue

The neoclassical economic paradigm is built upon the idea a human being is little more than a globule of self-interest. It teaches that the market economy is populated by rational individuals whose selfishness is constrained only by expediency. Ayn Rand was an enthusiastic proponent of this idea in extreme form, and her celebration of it can be found in The Virtue of Selfishness: A New Concept of Egoism, published in 1964, which explains, among other things, the destructiveness of altruism and the virtue of acting solely in your own self-interest.

At Sears, Lampert set out to create the Ayn Rand model of a giant firm. The company got a radical restructuring. It was something that had been tried at giant industrial conglomerates like GE, but never with a retailer.

First, Lampert broke the company into over 30 individual units, each with its own management, and each measured separately for profit and loss. Acting in their individual self-interest, they would be forced to compete with each other and thereby generate higher profits.

What actually happened is that units began to behave something like the cutthroat city-states of Italy around the time Machiavelli was penning his guide to rule-by-selfishness. As Mina Kimes has reported in Bloomberg Businessweek, they went to war with each other.

It got crazy. Executives started undermining other units because they knew their bonuses were tied to individual unit performance. They began to focus solely on the economic performance of their unit at the expense of the overall Sears brand.  One unit, Kenmore, started selling the products of other companies and placed them more prominently that Sears’ own products. Units competed for ad space in Sears’ circulars, and since the unit with the most money got the most ad space, one Mother’s Day circular ended up being released featuring a mini bike for boys on its cover. Units were no longer incentivized to make sacrifices, like offering discounts, to get shoppers into the store.

Sears became a miserable place to work, rife with infighting and screaming matches. Employees focused solely on making money in their own unit ceased to have any loyalty the company or stake in its survival. Eddie Lampert taunted employees by posting under a fake name on the company’s internal social network.

What Lampert failed to see is that humans actually have a natural inclination to work for the mutual benefit of an organization. They like to cooperate and collaborate, and they often work more productively when they have shared goals.  Take all of that away and you create a company that will destroy itself.

In 2012, Lampert bought a $40 million home on Indian Creek Island, near Miami, just around the time he decided to sell 1,200 Sears stores and close an additional 173. That same year, Sears Holding was named the sixth worst place in America to work by AOL Jobs.

In the 1980s, a noxious business philosophy developed that said that shareholders were the only true stakeholders in a company, because they made the investments and bore the risk. Forget about the investments and risks born by taxpayer and the people that work for a company. They didn’t matter. A company had no responsibility to anybody but the shareholder.

As a result, executives started using this justification for various kinds of hustles designed to line their pockets. They got very adept at the game of buying back their own stock in a way designed to inflate earnings per share and hide weaknesses.

Fortune magazine, in a story about what happens when Wall Street jumps into the retail business, reports that under Lampert, Sears has gone on a stock buyback spree. Between 2005 and 2011, he took what was once the company’s strong cash flow and spent $6.1 billion of it on stock buybacks. During the same time period, only $3.6 billion was spent at Sears on capital improvements. Lampert told investors that upgrades and new stores were not an “efficient” use of capital. Neither was paying workers decently. In fact, Sears workers are paid so badly that they have taken to the streets to protest.

So when you walk into a Sears store today, you find a sad, dingy scene with scuffed floors and chipped paint. Tense-looking workers hover over merchandise scattered onto ugly display tables. Hardly makes you want to buy a microwave.

A handy chart on Yahoo Finance show that buybacks reached a high just about the time that Sears' sales went into the toilet. Stock buybacks are really just an effort to manipulate stock prices, and they don’t help a company’s long-term health. They divert money away from the things that a company needs to have to succeed, like decent salaries for workers and investments in new products and services. Wonder why Apple is no longer making anything interesting? Why its retail workers get paid squat? Check out what they’ve been doing with stock buybacks.

Lampert’s buyback scheme has raked in a pile of money for him and his early investors, but it’s also flushing the company down the drain. Hoovering cash out of any firm, especially a retailer that needs appealing stores and strong advertising, will eventually crush sales.

And so it has. Sears has lost half its value in five years.

Conclusion:  The lessons of Crazy Eddie seem so obvious that a bunch kids running a lemonade stand could understand them. You have to know something about the business you’re running, especially a big one. Success requires cooperation rather than constant competition. Greed is ultimately destructive.

The invisible hand of the market appears to have attempted to slap Lampert upside the head to teach him these things. But he remains committed to his nonsense, and the real losers are all the hard-working people who have lost their jobs, and the potential loss to the American economy of two revered brands.

It's probably a good thing Ayn Rand never tried to run a business.