No one cares about Dunham vs. Hamm

We all love "Mad Men" and "Girls" -- so how come no one's interested in the Emmys at all? 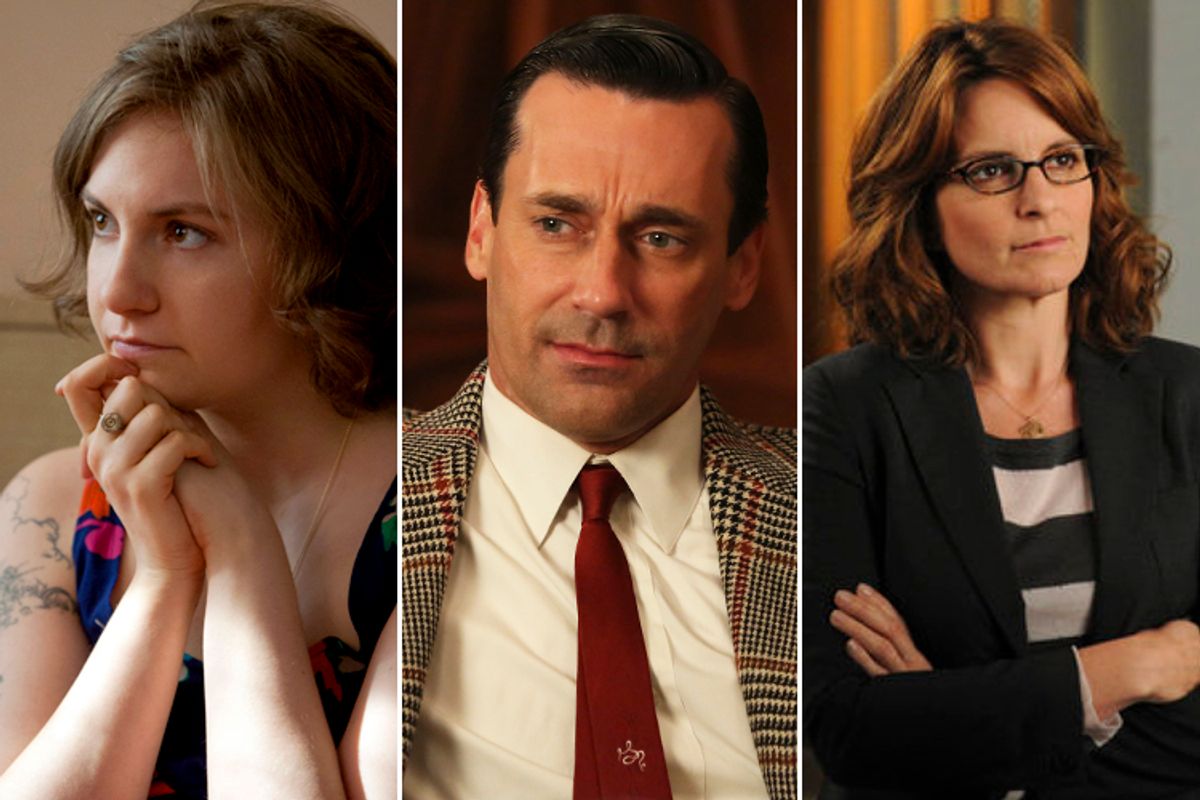 For all that we can agree (can't we?) that television is in an ongoing golden age as the movies get dumber and dumber, the Emmys aren't quite the Oscars.

Though some years the field is full of $100 million grossers and some years it's mainly indies, the Academy Awards ceremony each February effectively stops traffic (or, for bloggers, drives traffic) for months in advance. But while TV has taken over the water-cooler throne from film, will anyone be handicapping the Lena-vs.-Tina battle in best actress in a comedy the way people held their breath for Jennifer Lawrence? Will anything host Neil Patrick Harris does drive the insane Twitter frenzy Seth MacFarlane did last February? And will the show manage to boost its ratings after years of hovering around 13 million viewers -- respectable enough, but not close to the Oscars on their worst year?

The Emmys have actually improved by letting in, one by one, HBO, basic cable, non-HBO pay-cable networks and now Netflix, but they're stymied by the fact that the vast breadth of programming out there makes it impossible for any non-TV critic to catch up on all the nominees. "You can imagine how easy it might've been 15 years ago when it was just network TV," said television critic Roger Catlin. "There were four networks and PBS and they could find five shows everyone's seen."

Indeed, 15 years ago the Emmys honored acknowledged hits "Frasier" and "The Practice" along with nominees like "Seinfeld," "ER," "Law & Order" and "The X-Files"; though HBO's "Larry Sanders Show" got into the best comedy field, it was by and large a field of episodic broadcast series the vast majority of viewers could be expected to have sampled. (This was the year before "The Sopranos" entered the fray.) Even leaving aside the necessarily much smaller ratings numbers for 2013's nominees due to audience attrition and many people's lack of premium cable or a Netflix subscription, what viewers have caught enough of even three of the six dense, sophisticated best drama nominees this year to have an informed opinion about who should win?

And it's not as though an Emmy win will make a show popular: "Everyone's heard way too much about the main nominees and already made up their mind if they're going to watch them," said Catlin. Unlike a surprise Oscar nominee like "Beasts of the Southern Wild" or an Oscar winner that can monetize its statuettes, television series are presaged by chatter that refreshes each week -- and watching them is a real time commitment. In the era of serialization, it takes a lot of work to jump into a series even one season in, work that an Emmy win doesn't alone inspire.

Though shows like "30 Rock" and "Arrested Development" likely both owe their prolonged lifespans to the prestige that came from early Emmy wins, both never became hits in any sense other than cultural cachet; other shows, like "Mad Men," have grown their viewership over time, but would anyone argue that the Emmys were advancing, rather than following, the drumbeat of buzz around that and other cable shows? And has Jon Hamm's career been meaningfully hurt by not winning an Emmy any more than Brian Cranston's has been meaningfully helped by winning one? Both actors are locked into contracts that allow their performances to gain more of a following with time and preclude them from taking many more prominent roles. Their fans remain their fans.

"The place where it does have an effect is in the business," said television historian Tim Brooks. "It can have a considerable impact on how a network is perceived. The inclusion of Netflix [in the form of 'House of Cards' and multiple nominee 'Arrested Development'] will raise attention to Netflix among the creative community. It can now be seen as a place with street cred and prestige, the sort that can help them attract A-list producers."

Television author and Emmy historian Wesley Hyatt took a slightly dimmer view: "It's there just to give the entertainment community a chance to slap themselves on the back and give people an awards ceremony to watch."

But if viewers are clearly not watching to have their minds changed, why bother tuning in to creative types congratulating one another? Though, as the Los Angeles Times' Gold Derby awards blogger Tom O'Neil noted to Salon, "The Emmys are crucial for the survival of quality television," but they seem to be playing out, in front of the public, a rather long game, boosting the cachet of networks so that more good programming can come to them in the future. For the TV viewer who has three season passes among the field, is that enough to merit setting aside a Sunday night?

"We're a nation of film snobs. TV is the boob tube, and the movies are silver screen. There's an exalted false reverence for film -- a sense of cultural inferiority," said O'Neil. Movie stars have typically had a leg up at the ceremony; in recent years, Glenn Close, Sally Field, Gwyneth Paltrow, Julianne Moore and Maggie Smith have beaten rivals who've focused on small-screen work, and O'Neil noted that two-time Oscar winner Kevin Spacey was a formidable threat for best actor in a drama for his "House of Cards" turn. As much as television may be better than movies, the Emmys most of all feel like a ceremony that hasn't been clued in to that fact, whether it's fawning over film stars (why, exactly, did Julianne Moore present "Homeland's" best drama Emmy last year instead of any full-time TV star?) or edging toward a goofy, wacky tone that has exactly nothing in common with what's in vogue on TV right now.

There seem to be few options to the Emmys' dilemma, and to the corner they're painted into, playing out for hours on a different broadcast network each year while one or another prestige drama on cable, broadband or public television with a cadre of obsessives and absolutely zero casual fans eats the networks' lunch. The New York Times' Bill Carter recently noted that the Emmy committee has discussed expanding the pool of nominees, to make room for more people's favorite shows; it could be, though, that that would make the best drama field even more imposing. The fans of "Game of Thrones" or "Mad Men" or "Downton Abbey" can hardly be expected to keep up on four more serious, dark dramas.

As for Jon Hamm, even if he never wins an Emmy, he seems poised to get what the ceremony keeps proving is the real prize -- a future in movies.