If Amazon puts bookstores out of business, it will destroy the main way readers learn about new books to buy 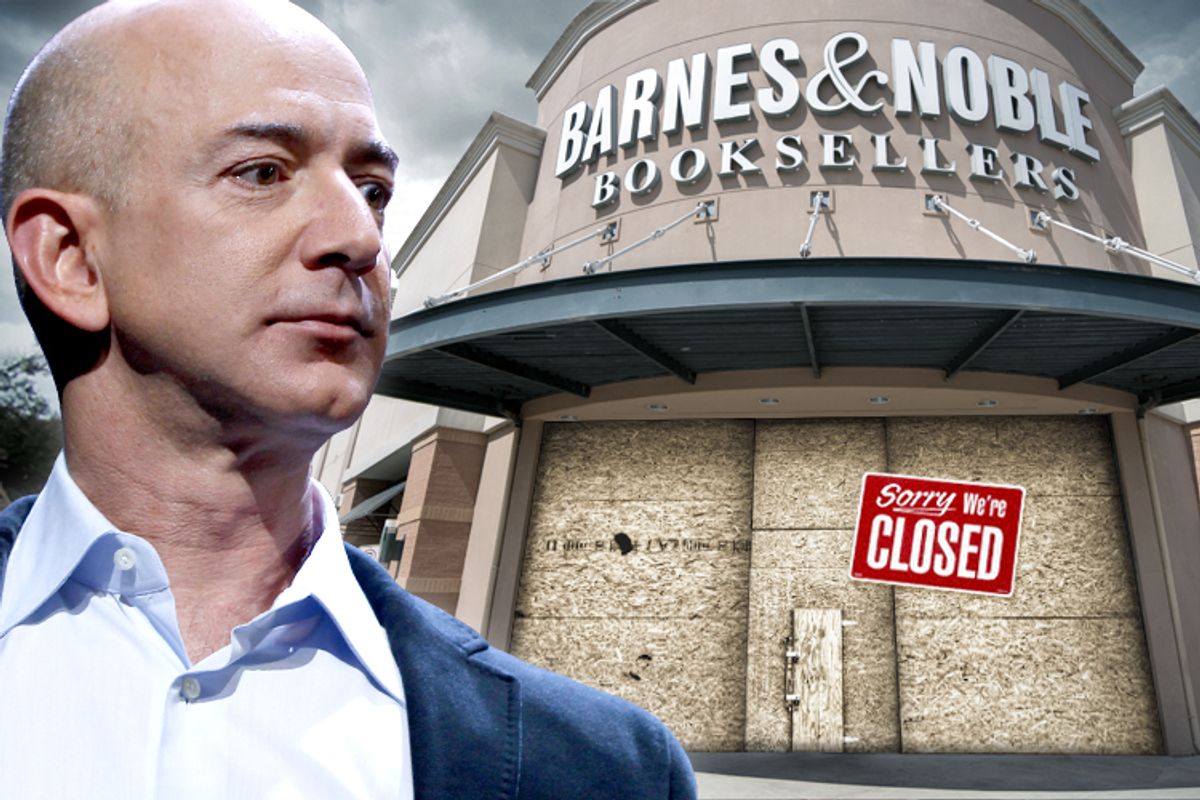 By the time a federal judge ruled last week that Apple had illegally colluded with five of the so-called Big Six publishers to raise e-book prices, just about no one in the book business was surprised. All the publishers named in the lawsuit had already taken a long look at the uphill battle and the crippling legal bills and decided to settle. (Unlike Apple, book publishers have less cash than the United States Treasury.) The ruling seemed to be just the latest uplifting story for Amazon, whose dominance Apple and the publishers had been trying to curtail until the Department of Justice stepped in.

Also last week, Amazon’s closest competitor in bookselling, Barnes & Noble, announced the resignation of its CEO, William Lynch, and said it would not name a successor, rarely a good sign. Already in a distant second place, Barnes & Noble has recently seen its woes deepen significantly. The company has been closing stores and announced in June that it would close still more and stop making Nook color tablets. It reported net losses of more than $1 million per day.

With challenges to Amazon’s power wilting fast, the company’s stock closed the week at an all-time high. It is not so obvious, however, that the Seattle behemoth is sitting pretty, at least when it comes to bookselling. Amazon could end up being victimized by its own phenomenal success.

Through logistical excellence, e-reader innovation and pitiless business practices, Amazon has contributed to the demise of hundreds of independent booksellers and the entire Borders franchise, and it is now threatening to do the same to Barnes & Noble. Independents have seen a small resurgence in market share lately, but it is not anywhere near enough to counteract the loss of chain store locations. Industry analyst Mike Shatzkin calls the ongoing decline in retail shelf space “relentless.” That all sounds good for Jeff Bezos, right? After all, Amazon is running out of competitors.

The problem is, by killing off stores, Amazon is making life difficult for the publishers who give them something to sell in the first place, and the retailer’s dominance could pose a threat to the long-term health of the industry. Amazon does deserve credit for reaching far-flung readers and expanding the e-book market. A person who lives a hundred miles from the nearest decent bookstore now has access to nearly any literature published in English, whether as an e-book or by home delivery. Other vendors can now offer this too, but Amazon is the best at it. On the whole, the company is outstanding at what it does — and that’s just the trouble.

According to survey research by the Codex Group, roughly 60 percent of book sales — print and digital — now occur online. But buyers first discover their books online only about 17 percent of the time. Internet booksellers specifically, including Amazon, account for just 6 percent of discoveries. Where do readers learn about the titles they end up adding to the cart on Amazon? In many cases, at bookstores.

The brick and mortar outlets that Amazon is imperiling play a huge role in driving book sales and fostering literary culture. Although beaten by the Internet in unit sales, physical stores outpace virtual ones by 3-to-1 in introducing books to buyers. Bookshelves sell books. In a trend that is driving the owner of your neighborhood independent to drink, customers are engaging in “showrooming,” browsing in shops and then buying from Amazon to get a discount. This phenomenon is gradually suffocating stores to death. If you like having a bookseller nearby, think carefully before doing this. Never mind the ethics of showrooming — it’s self-defeating. You’re killing off a local business you like. (If you prefer e-reading, many independent stores have agreements with Kobo and Zola Books that give them a cut of e-book sales.)

As online sales continue to gain ground and shelf space diminishes, “discoverability” has become a big worry-word in the industry. To make a point so obvious that it’s sometimes overlooked, the most crucial moment in bookselling is the moment a reader finds out that a book that sounds interesting exists. How else is she going to buy it?

When it comes to bringing about this moment, the only people as effective as local booksellers are acquaintances who make a recommendation — and of course those recommenders often found the book in a store to get the ball rolling. According to the Codex Group study, stores and friends each generate more discoveries than the news media, who are less important than they think they are. The personal touch matters more. "The Catcher in the Rye" is doing OK without a publicist.

By defeating its competitors, Amazon is choking off some of its own air supply. Barnes & Noble and independents are in one sense competitors for Amazon, but in another sense they are functioning as unwilling showrooms and sales agents for the online giant. As David Carr has suggested, Amazon should want them to survive, if only out of self-interest.

Amazon has made attempts in recent years to get better at “discoverability” — with  the “Look Inside” virtual browsing feature and with recommendation algorithms (“New for You”), and through highlighting bestseller lists and editors’ picks. In a bold step in March, Amazon acquired Goodreads, the leading “social reading” website, where readers recommend and review books for one another. Many observers saw this move as a grab for more customer data. The stronger motivation may have been the desire to secure a discovery engine that would funnel customers to Amazon.com, thus protecting against the loss of stores. But so far Amazon has not cracked the discovery problem. Sometimes the site makes a recommendation that no sentient human being would make, which is telling. Even if Amazon gets better at this, it may run up against a wall: Some people want to literally get a feel for the book before they buy.

Amazon nonetheless continues to trounce its bookselling rivals when it comes to sealing the deal. Part of the reason for that is the deep discounting, of course. Those prices are made possible by the fact that for all intents and purposes, Amazon does not make money. It lost money in 2012 overall and made a virtually meaningless margin, relative to its size, in the most recent quarter. For a business owner, it’s hard to compete with that and still feed your family. Jeff Bezos has managed to convince shareholders to have amazing patience while he pleases customers seemingly without regard for current profit. Matthew Yglesias has cleverly written, “Amazon, as far as I can tell, is a charitable organization being run by elements of the investment community for the benefit of consumers.”

Jeff Bezos quoted those words from Yglesias in a letter to shareholders in April, then countered the notion: Don’t worry, Bezos essentially said, we’re not a charity. So where is Amazon going to get its profit margin down the road? Company representatives often talk about “improving our execution,” but Amazon’s execution is already exceptional. So they will probably have to either buy stuff for less or sell it for more. The New York Times recently reported that Amazon is cutting back discounts on books (though the paper acknowledged that the company denies it and that “the evidence is anecdotal and fragmentary”). The article provoked some outrage at Amazon as it appeared to confirm fears that the company would raise prices once it captured the market for books.

But for the publishing industry, rising prices may be better than the alternative. As industry consultant Peter McCarthy told me, instead of alienating consumers by asking for more money, Amazon, which calls itself “Earth’s most customer-centric company,” could gets its profits by demanding that the publishers give them the goods for less. That could have a crippling effect on the quality of the books in an industry where risks are already high and salaries, advances and profits are low.

I think Amazon is well aware that there are pitfalls that come with winning too big. Some people in publishing view Amazon as an oafish corporate giant that is indifferent or clueless about the fate of reading. Having done some reporting on the company, I would disagree. These people are no dummies. Perhaps the reduced discounts are a hint that they will begin to ease up a bit on their notoriously merciless methods — “your margin is my opportunity,” Bezos famously says — and allow the rest of the industry to breathe, if only so that they themselves can turn a dime.

Of course consumers want to pay less, but it’s probably healthier for readers in the long run if Amazon stops making prices so low that publishers and bookstores are endangered. In a world where Amazon discounts a popular new book by 10 or 15 percent instead of 35 percent, brick and mortar stores would be able to compete. That would be better for everyone.