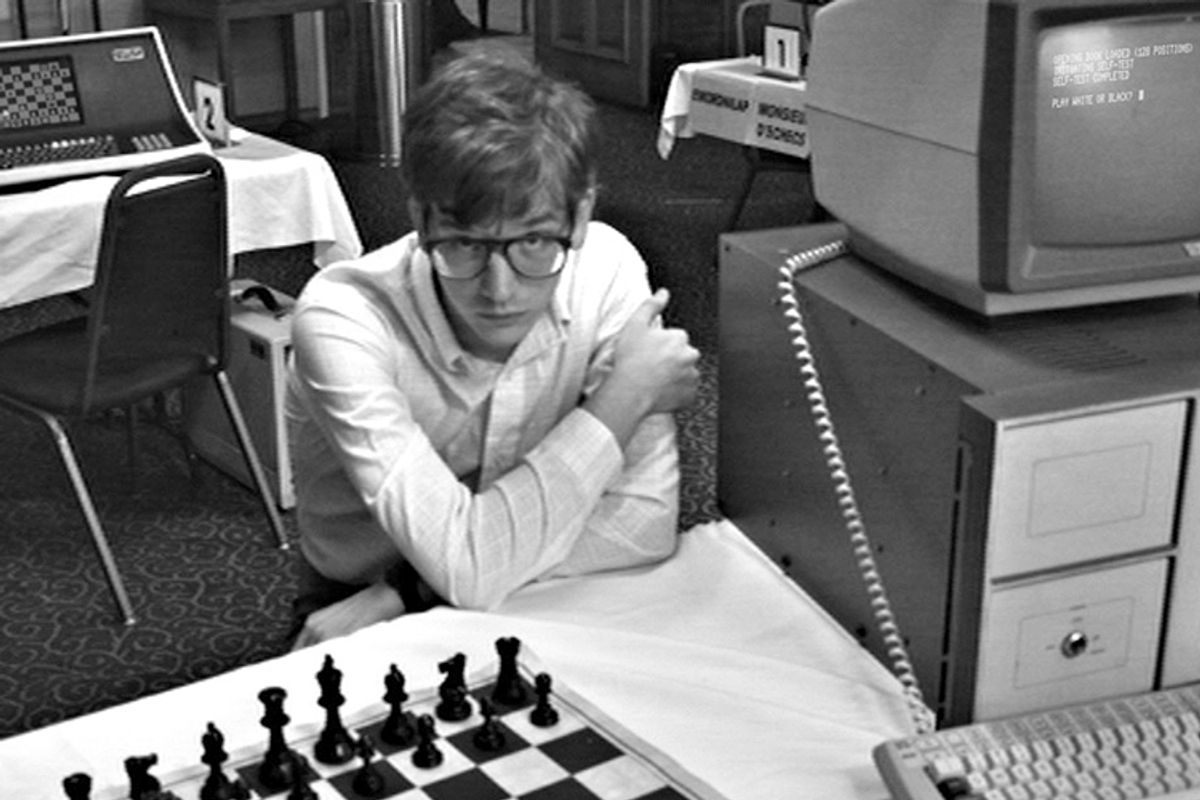 "Computer Chess" may be the strangest -- and most wondrous -- film of the year so far, and its director, Andrew Bujalski, doesn't think it has much to do with chess.

The film takes place at an early-'80s computer-chess tournament, at which different programmers' chess-playing machines go head to head over the course of a weekend. It takes the form, for much of its running time, of fake found footage from an old video camera, an aesthetic Andrew O'Hehir described as "deliberately unlovely."

With the tension of actual chess-playing removed from the convention -- the machines, until one begins to display an unsettling intelligence, are just acting according to their design, and nothing the programmers do can change the outcome of the tournament now -- there's time for a group of indoor kids to run wild in a depressing motel, taking drugs and wandering upon other folks at the hotel, swingers undergoing a sort of New Age revival meeting.

Bujalski was at the forefront of the so-called mumblecore movement in the 2000s, with his films like "Funny Ha Ha" exhibiting naturalistic style and ultra-low budgets. The label hasn't stymied him, though, as "Computer Chess" keeps some trademarks (some of his actors are amateurs, and the dialogue is at times murky) yet seems radically different from the past decade's indie scene.

The director, who is far from a serious chess player, told Salon that the film is not intended to be a simple chess movie. We spoke to Bujalski about how computer chess is like moviemaking, how he's moved beyond mumblecore, and how he thinks about the fear of artificial intelligence -- which has moved faster than any programmer in "Computer Chess" might have imagined in the movie's first scene.

Does the rapid advance of artificial intelligence as depicted in the film -- somewhat fancifully, perhaps, by the end -- reflect your preoccupation with what some view as the coming singularity?

I don't know about "preoccupied." All of us are aware of it. It's impossible to be alive in the first world and not be very aware of computers' growing presence over the course of our lifetimes and the rapid advances. No one knows where it's going. But I'm much more afraid of the collapse of culture as I know it than I am about robots coming to kill me. One serves as a decent enough metaphor for the other.

I'm not a futurist. Look at my movies -- if anything, I'm a past-ist. I'm fixated on outdated technology, outmoded technology. Far be it from me to tell you where it's all headed. It's on my mind. I have a 3-year-old son and I don't know what his world's going to be like.

Do you find the mantle of "mumblecore" to be something that's restricted you as you confront ambitious themes like the ones in this film?

It's silly. But I was probably most frustrated with it circa 2007 when the word was hot and on everybody's lips. It hasn't gone away. I assume it'll be on my tombstone. I'm increasingly comfortable with it because I'm increasingly used to it. It's not the first time in history that people, for convenience's sake or historical perspective's sake -- it's a human impulse to want to categorize things and figure out our culture via categorization. When I was a younger man at the height of quote-unquote grunge, I remember being perplexed -- What is grunge? I've heard Nirvana, I've heard Pearl Jam, and they don't sound anything alike to me! They both just wear flannel shirts. That's how I feel about mumblecore -- some version of the flannel shirts being mistaken for an aesthetic movement.

Your movie seems to use chess as a vehicle to get at different topics -- for instance, computer programmers' competition -- as well as bigger themes. Is it concerned with chess, really, at all? Are you particularly interested in it?

I certainly wouldn't, if I were trying to teach somebody how to play chess or build their ability to play chess -- I don't think this is the best instruction. But as somebody who's very much enjoyed chess, but never had much talent or discipline to improve much, I've always been attracted to chess, as much for the delightful metaphors that can be wrought from it as for the game itself. I'd agree -- computer chess is a very different thing from chess culture itself.

A real chess tournament between humans is filled with gripping psychology among participants. Psychology is part of the game. Psyching out your opponent, as with any athletic component, if not the key element. That is not the case with computers. All participants in computer chess tournaments have fascinating psychologies themselves but as far as the games go, they tend to be low-stress, low-drama, not much you can do except enter the opponent's move and wait for your computer to spit out the answer. Then you can go back to your hotel room and freak out.

To draw a comparison -- that's one of the nice things about being a filmmaker versus any kind of live performer. I don't envy musicians or stage actors. I understand that the audience response can be a thrill but it's also terrifying to go out onstage and realize you could screw everything up. The peculiarity of the filmmaker's existence is you put all your time, love, energy, everything into this work ... at the moment it's communicating with the audience, it's over for you. I'm either having dinner across the street or thousands of miles away. It has nothing to do with my performance in the present. It can be a great relief or just a very different experience.

That's a little bit of a stretch, I guess.

Talk a little bit about your history with chess.

I learned the rules sometime in elementary school -- I enjoyed it a good deal, but that was the height of my chess career. I played most recently, circa ... fifth grade? I wish I had kept up with it. There was a brief period as a teenager when I got enthusiastic again; I tried playing chess hustlers and obviously, as would happen to most people, I got soundly and quickly whipped.

But it's always fun to play, even if you're getting demolished. I haven't particularly pursued it. This film was funded through Kickstarter, and one of the crowd-funding's great, glorious prizes for our project was that if you gave some amount, you were allowed to play an online chess game with me. It was not my idea of a privilege. Most people politely declined. I played them -- they were a lot of fun. One of the games was with someone equally as bad as myself; that was the most fun. It was knock-down, drag-out. And after the game, you can submit your game to the computer for analysis. It said 76 percent of the moves in this game were blunders. It was sobering, for sure.

There are so few female characters in this film. Was that meant to be a nod to the chess scene at the time?

To some extent, we play it for laughs. I can't speak to historical accuracy, I wasn't there. But if you looked at photos of tournaments from that period, you're almost entirely looking at white guys. The racial aspect of that changed over the years. And there were some women -- but not a lot. Their stories are, I'm sure, fascinating. Robin Schwartz, who plays [computer engineer] Shelly, did go out and do a little research, and was able to dig up some interviews. And more generally, I was able to talk to a few women who had been electrical engineering majors at that time about what that felt like.

We were probably exaggerating that to some degree or goofing on it. I'd imagine it's not too far off. It has less to do with anything particular to that culture than what happens when you get 40 guys and one woman. There's a very particular dynamic.

My feeling is that it's goofy and compelling. To some degree, it's undeniably a gimmick or a stunt, but not merely for the sake of gimmickry. We had to mean it. There had to be a reason for it. I hope that's true of everything in the movie. There's plenty of that in the movie -- moments of silliness, flights of fancy. We wouldn't have done it if we weren't on some level committed to it. I'm very committed to my goofiness.