Detroit is your problem, too

If the Motor City defaults on its general obligation bonds, governments everywhere will pay the price. Here's how 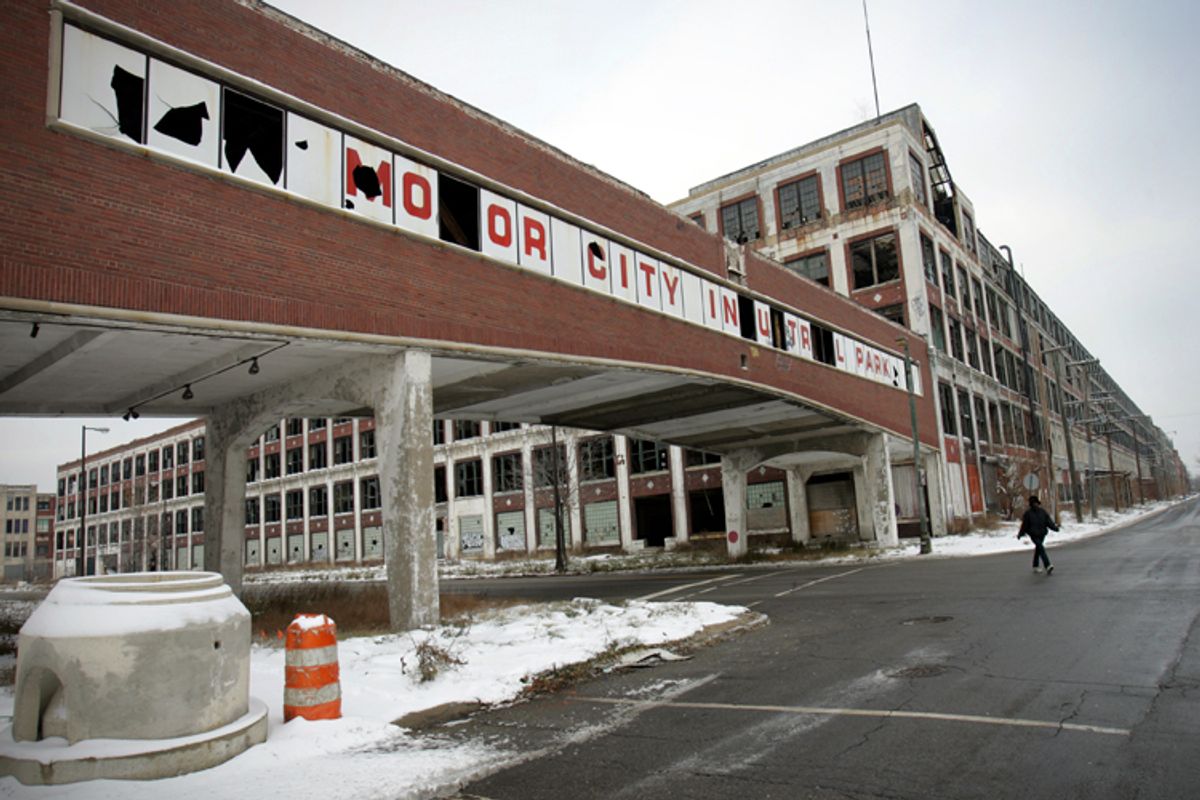 In 1990, Israeli-American author Ze’ev Chafets published a book entitled "Devil’s Night and Other True Tales of Detroit," in which he interviewed Oakland County Prosecutor L. Brooks Patterson, a suburban prosecutor who made his political bones by leading the fight against school busing to integrate Detroit and its suburbs. Oakland County, the auto executive bedroom community where Mitt Romney grew up, is one of the wealthiest suburban enclaves in the nation, with a per-capita household income twice as large as Detroit’s.

“In no sense are we dependent on Detroit,” Patterson told Chafets. “They are dependent on us. The truth is, Detroit has had its day. I don’t give a damn about Detroit. It has no direct bearing on the quality of my life. If I never crossed 8 Mile again, I wouldn’t be bereft of anything.”

(Patterson was the negative image of Detroit Mayor Coleman A. Young, another racially divisive politician who began his 20-year mayoralty with a speech telling all the city's thugs to "hit 8 Mile Road." Instead, all the white people did.)

Patterson was just elected to his sixth term as Oakland County Executive, with the same down-on-Detroit rhetoric that has defined his career. (He recently called Detroit’s attempts to lure businesses from Oakland County “moving furniture around on the deck of the Titanic.”) But Detroit's bankruptcy has finally proven him wrong. Detroit’s bankruptcy affects Oakland County, the state of Michigan, and really, every state, county and municipality in the nation. If Detroit defaults on its general obligation bonds, governments everywhere -- but especially in Michigan -- may end up paying more to borrow money, as the bond market responds to the precedent set by a major city returning pennies on the dollar to investors. When a state’s largest city goes bankrupt, it creates an increased risk for all the governments around it -- including the state itself.

Detroit’s bankruptcy could result in interest rate hikes of a quarter of a point on the $19 billion of general obligations held by Michigan’s governments. That would cost the state’s taxpayers $47.5 million a year.

Michigan’s refusal to share responsibility for Detroit’s finances goes all the way back to the 1970s, when Republican governor William Milliken proposed a regional tax base -- only to have the plan shot down by the state legislature. Had Milliken been successful, Detroit would not be in bankruptcy today. In the 2000s, the state cut revenue sharing to Detroit, costing the city $200 million a year. Detroit has run budget deficits ever since. The bond market has noticed Michigan’s neglect. Richard Larkin, director of credit analysis at Iselin, New Jersey-based Herbert J. Sims & Co., told Bloomberg BusinessWeek that Gov. Rick Snyder and other leaders are “washing their hands” of Detroit.

“Investors will begin exacting a premium from any borrower that has Michigan’s name on it,” Larkin said. “From this point, Detroit’s name in the muni market is probably mud.”