I fell for an ape 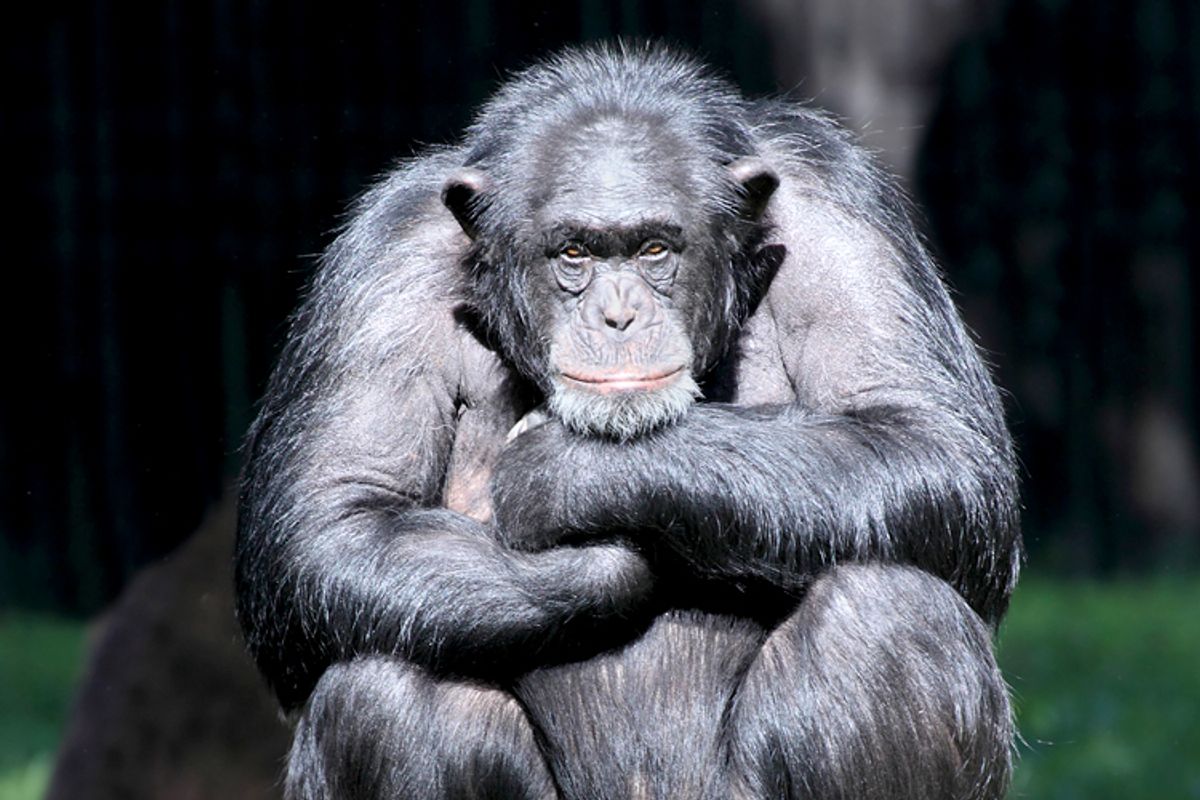 A few years ago I had a lovely bedtime ritual of pouring a large whisky and watching BBC nature programs in bed. I was well into the messy part of middle age, somewhat surprised that middle age had struck so soon. I saw footage of a female chimpanzee carrying her child across some shallow water, and of orangutans washing socks in the water at Camp Leakey, and I began to wonder less about the animals on the screen and more about the one in bed.

As a novelist I concerned myself with psychology, culture, history; rarely did I look at the human body and what we are as a species.

The excellent work of Frans de Waal, Roger Fouts, and other primatologists opened my eyes to the nature of great apes, the category that includes chimpanzees and humans. I wanted to write a novel that looked squarely at chimpanzee behavior, how it resembles and differs from our own.

And then I met Pepper.

Pepper was forty-something, just like me, and lived in a sanctuary for chimpanzees near Montreal called the Fauna Foundation. When I first visited Fauna the director of the sanctuary told me that Pepper was in the moody part of the month and suggested I might not enjoy her company. There was a metal grid between Pepper’s world and mine because Pepper was strong enough to rip my arms off and beat me with them.

She was actually in a great mood. She looked into my eyes, and despite the fact that she was nothing like my type I had an immediate crush on her. She sat across from me for a while and stretched a finger through the grid, making grooming noises. I have a tiny mole on my left hand and I realized she was trying to clean it – as if to say, let me get that dirt for you. Later I saw her hug another chimp, Sue Ellen, who was upset about a fight she’d had with someone else in the group.

Before living in comfort at the sanctuary, Pepper had spent 27 years in various laboratories. I spent a month going through her medical files – hundreds of hand-written slips – and it was a miserable experience. She had been used in hepatitis studies, regularly lost pieces of her liver for biopsies (36 in total), and was repeatedly infected with HIV, not only from humans but from other deliberately infected chimps in different studies. For fourteen years she lived in a 5 x 7 x 5-foot cage suspended above the ground. She had a number tattooed on her chest when she arrived at the lab, and I followed that number through more than three hundred procedures (all eerily, curtly noted by vets and technicians).

The eminent primatologist Jane Goodall recently joined the Fish and Wildlife Service in proposing that chimpanzees in captivity be listed as endangered species, a move that  could end the use of chimpanzees in medical research (almost a thousand still remain in laboratory environments; only 150,000 remain in the wild).

And now the National Institutes of Health has announced that it plans to retire “most of the chimpanzees it currently owns or supports”, which may lead to the removal of hundreds of chimpanzees from laboratory environments.

The NIH plans to keep fifty chimpanzees for research purposes, and the Institute of Medicine, on whose recommendations the NIH has acted, has stated that despite the questionable ethics and value of chimpanzee research, if there is “a new, emerging, or re-emerging disease or disorder” that challenges available treatment or technology, it may be necessary to use chimpanzees in the future.

I applaud the actions of Dr. Goodall, the Fish and Wildlife Service, and the NIH. I fear, though, that loopholes like the above will continue to be utilized.

I nonetheless find it too easy to point my finger at the biomedical community.

I believe that what should be more openly acknowledged in this discussion is not that chimpanzees are almost human or that scientists are wrong and animal welfare groups are right; it is that we are all great apes. We are not only animals, but this particular animal: we have hierarchies and require third parties to settle our disputes; we adopt the culture of whatever group we are born or forced into; we sympathize with our own and with other species; we use tools and solve problems; we make war on foreigners and use war as a means to settle disputes; we shun the unsuccessful, show pity, altruism and murderous contempt.

All of this is documented chimpanzee behavior.

What the biomedical community has demonstrated is the most ineluctable characteristic of all apes, if not of all animals: the need to survive.

Implicit in the array of biomedical research involving chimpanzees is that we are kin – closer genetically than a spinner dolphin is to a bottlenose dolphin. We acknowledge this kinship with chimps insofar as it might cure our diseases, but when it comes to calling ourselves apes (just as we call the two dolphins ‘dolphins’), we are completely unprepared – culturally, intellectually, historically and instinctively. We have no language for it. Humans are humans, apes are hairy, and animals are what we are not.

In Pepper’s medical file are test results from independent laboratories. Her cholesterol tests were set out identically to those I receive from my doctor. And the technicians who did her blood work apparently did not know that this patient was a chimpanzee. When she tested positive for HIV, the form letter from the lab contained compassionate legal information: “It is required that all test results be relayed to the patient only by physicians or personnel suitably trained to counsel the individual as to the significance of the report.”

I thought of how little these English words would have meant to Pepper, even if they had ever been said to her.

Mine is one of several novels and works of non-fiction to come out recently with chimpanzees as their subject. I like to think that whenever chimps are discussed, we can move closer to realizing that our kinship is not some sort of cute coincidence, or something we have evolved beyond. I hope that we can alter our language to reflect the truth in our blood and acknowledge the contradictions of what it means to be an ape. We don’t just care for animals, we are animals. And like all animals we will do anything we can, at the cost of other species, to survive. We will deplore cruelty, even while engaged in it. The clashes between different human factions and creeds are our equivalent of what chimpanzees do when they hoot and hit and bite, choosing a group and hating others.

Pepper, my contemporary, died last year. It made me very sad to have known such intimate facts about the story of her body. I could get narcissistic about what she meant to me and righteous about her symbolic importance; but really I saw her as a woman, an individual with an extraordinary history, and someone greater than me not only in her ability to survive unimaginable violence and neglect, but in her ability, despite it all, to comfort her fellow species and to reach out to groom a stranger’s hand. To some this makes me look like a lunatic, an animal-lover, a simplifier of human nature. We are doomed to choose our factions.

Thanks to the efforts of medical science I can hope for two or three more decades of life without disease. I would probably have had a different view of the use of primates – great apes specifically – in medical research if I hadn’t met Pepper. I believe that any effort to keep chimpanzees alive must be embraced. I also believe we won't ever be able to talk properly about Pepper, or protect her kind, if we can't learn to talk about ourselves as a species of ape. We are not merely descended from apes. We are apes. Until we realize this fact we cannot have enlightened discussions about what it is to be human.

Colin McAdam studied chimpanzees and primates while researching his third novel, "A Beautiful Truth." He lives in Toronto.