You should be watching "Naked and Afraid" 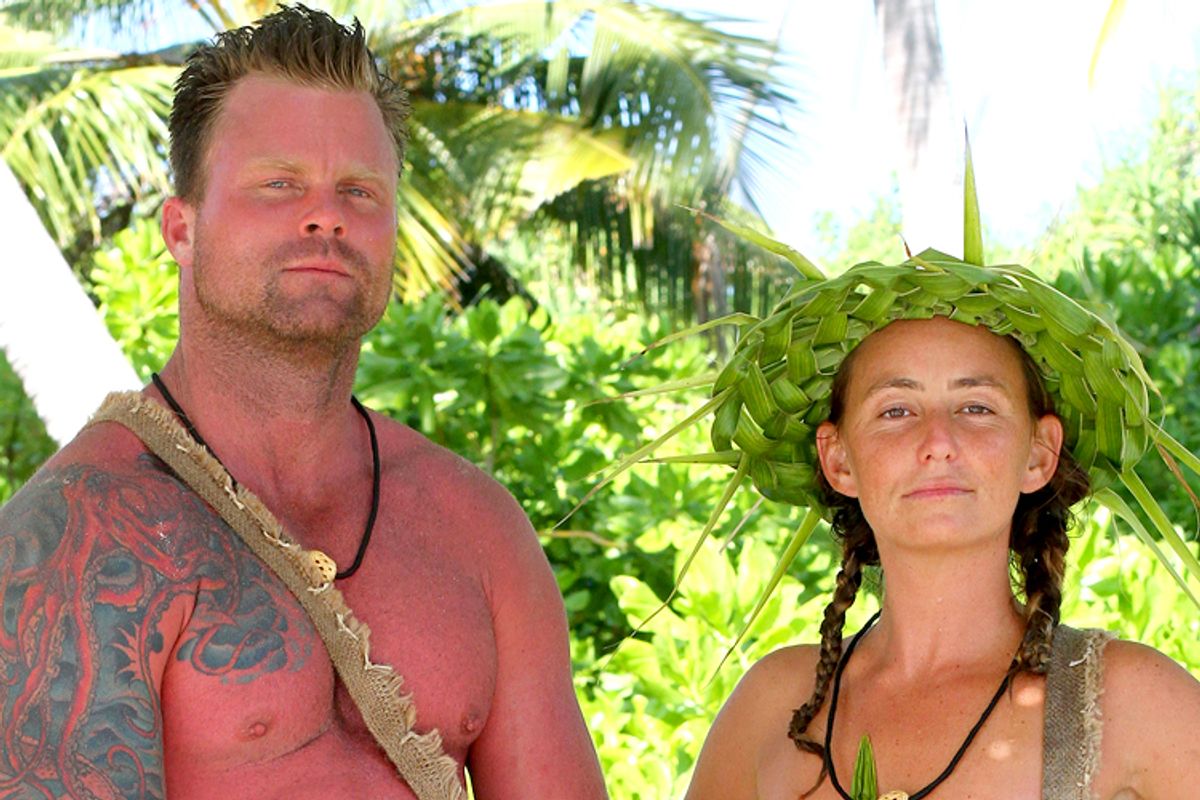 A sunburned man in a Speedo and a woman in an unusually skimpy sundress stand on a reef in clear blue water. Each holds a tool; they are attempting to catch a fish. “This isn’t worth cutting my feet over,” the woman says witheringly, referring to the razor-sharp coral underneath. In response, the man lunges toward the eel below the surface and immediately yelps, “Ow, I cut my foot!” Welcome to the hilarious and strange world of Discovery Channel’s “Naked and Afraid,” a show that purports to be about survival but, like most successful reality TV, is primarily about relationships.

On the face of it, the show’s formula is simple: a man and a woman who have never met before must work together in an unfamiliar location to secure water, food, shelter and, optionally, clothing. The grave-voiced narrator explains this at the start of each episode in the ramp-up to the series’ best punch line, which is the name of the show itself. (And you better believe the voice-over actor understands what comedic gold he’s working with. The title would be better punctuated as “Naked … AND AFRAID.”)

But it will become apparent within a single viewing of “Naked and Afraid” that the decision of who is paired with whom is as craftily made here as it is on “Wife Swap.” Are you a bitter 40-year-old man who hates “the younger generation” and has a serious grudge against women in general? Meet your waifish, self-described “free spirit” of a partner, who, p.s., is 22 years old.  How about a pasty ex-military alpha male with little to no knowledge of how to survive in tropical environments? Naturally, he’ll be with the deeply tanned sprite from Hawaii who recognizes equatorial plants by name. Then there’s the discrepancy in the completely made up “PSR” scores, a determination of each individual’s “primitive survival rating.” These mostly range from 6 to 8, and there’s always a difference of at least one point between the two partners.

That single point, as it turns out, makes a world of difference. It accounts for why Kim, the aforementioned waif, mostly huddles in the plant-made shelter tending the fire, while Shane ventures out to kill a deadly snake with his self-made sharpened stick. It explains why New England chick Laura stays entirely composed after slicing her finger deeply with a machete, but her partner, Clint, has to take a walk to blow off steam when she asks what he’s been up to all day. (Answer: nothing.) And it prepares us for Alison’s wise refusal of the filthy well water Jonathan guzzles down and soon after — sorry about this — defecates away. While the men usually lash out at the more accomplished women — “She thinks she’s God’s gift to bushcraft” — the women tend to chalk up their guys' “moodiness” to heat, cold or hunger.

Under these circumstances, and given the strong personalities the show (and probably survivalism as a hobby) attracts, it can be hard not to see “Naked and Afraid” as a battle of the sexes. “I’m trying to tread lightly, and respect you as a man,” the impressively capable Alison says to relatively helpless Jonathan, “but you’re condescending towards me.” “Condescending?” he barks out. “You’re crazy!” “I hope he doesn’t expect me to be a good little housewife,” hunter Kellie says of her uber-masculine partner, EJ, in advance of their meeting. Gender stereotypes are front and center in the minds of the participants in a much more durable way than is their own nakedness, which is prescient. Expectations about what roles each person should play are so deeply ingrained that they regularly come up in each participant's monologue, if not in conversation with each other. “Women aren’t natural hunters,” Shane tells his partner, Kim, one night while they share the dinner he killed. “They’re pussies.”

On that note, let’s address the nudity, which is not at all titillating and clearly poses a serious obstacle for our Adams and Eves to overcome. From body-covering bug bites to debilitating foot wounds, the lack of clothing is a major component of the survival challenge, and rarely seems to create any sexual tension or discomfort between the partners. When burned Jonathan complains that “the parts of me that have never seen sun before” hurt the most, self-professed prude Alison nods sympathetically while staring between his legs: “Yeah.” In a much-publicized development, Kellie is the only person who has yet, to the viewers’ knowledge, turned her exposed genitals into a boon by using them for fish bait. Yes, you read that right and no, we don’t have to talk about it more.

If the unexpected comedy isn’t enough — Shane complains that Kim hasn’t asked him anything about himself so he’ll “continue being humble,” then promptly makes her listen to a monologue about his past — the heartwarming revelations make the show unexpectedly sweet. “I dug deep within myself last night,” says Jonathan, a former Marine, “and realized I’ve failed my partner. She’s awesome.” As the show reveals its participants' physical vulnerability, their mental fortitude and generosity toward one another comes as a lovely surprise. The most pessimistic misanthropes among us will be disappointed to hear there’s not yet been an incidence of one partner refusing to share food with the other, no matter how irritated the provider may be, and fights are minimal, confined to tense conversations, devoid of violence. For all the hand-wringing over the presumed depravity of “Naked and Afraid’s" viewers, there’s been little recognition of the show's sweeter qualities. Partners aid one another, forgive and cooperate without fail, even if the goodwill comes in fits and starts, punctuated as it is by exhaustion, starvation and extreme discomfort. “You’ve got this, you’ve got this!” team members shout at one another while they try to start fires, fish and hunt. And get it they do. We're lucky to watch their triumphs.