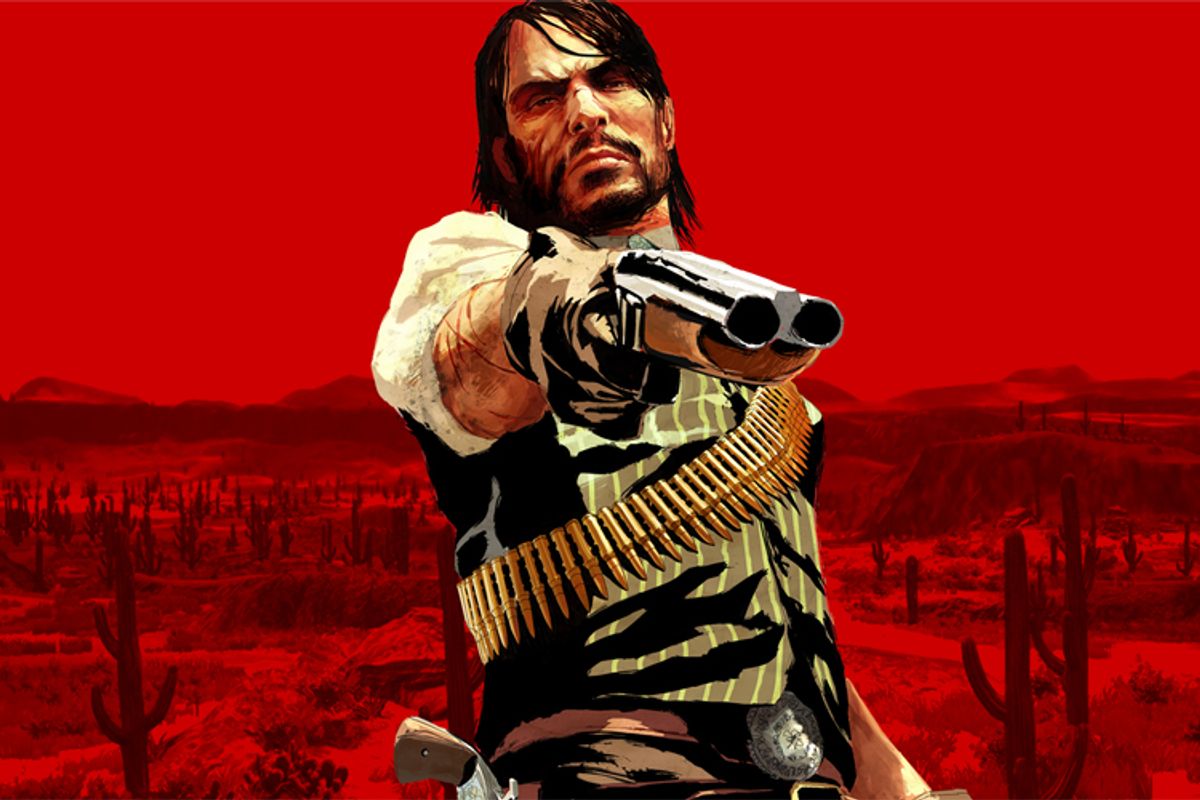 On Sept. 17, "Grand Theft Auto V," the latest installment in the wildly popular video game franchise, will be released for the Playstation 3 and Xbox 360, perhaps as one of the final major games for the current console generation.

Video games have developed quite a bit in both quality and influence since the "Pac-Man" booths of yore. In 2011, the Economist reported the video-gaming industry was already three-fifths the size of the movie industry. For that reason alone, games deserve serious critical attention -- and that includes looking at their politics.

"GTA V’s" publisher, Rockstar, has dealt with themes of socialism and class struggle in the past -- and in a way that at times seems to betray a right-wing, anti-government slant. Two games deal especially closely with these issues: "Red Dead Redemption" and "L.A. Noir."

"Red Dead Redemption" is a 2010 action and adventure game inspired by the spaghetti westerns of filmmakers such as Sergio Leone. Now I'm not a die-hard gamer. I haven't played everything out there, or even close. During the opening character-creation sequence of "Skyrim," a game hardcore reviewers were in ecstasies over, I got bored and gave up. But I LOVED "Red Dead Redemption." And yes, the caps lock is necessary. It boasts a beautifully rendered world, solid character development and a well-written story.

Part of the game is set during the Mexican Revolution. The central protagonist is a bounty hunter named John Marston. Asked whether he is a socialist, he explains, "I'm many things, most of them bad. But a man of political principles? No." Marston fights on both sides of the conflict before throwing in his lot with the rebels, seemingly more out of personal loyalty than ideological conviction.

Rockstar portrays the Mexican dictatorship as brutally corrupt, though it eventually paints the rebel leadership as little better. Similarly, the publisher seems sympathetic to the revolutionary rank-and-file, while also suggesting they are naive. Luisa Fortuna, a selfless peasant fighter, is perhaps the game's most uniformly likable character. She speaks passionately of the struggle without Rockstar imposing a noticeable sense of irony. At the same time, however, she is in love with a local guerrilla leader, who admits to Marston he would never marry a peasant and is revealed to be something of a political tyrant-in-waiting. His insincere commitment to Fortuna and the rebel cause is perhaps explained by his upper-class origins.

In the end, Rockstar sides with the rebels, but quite unenthusiastically. And the publisher seems to go further, cynically suggesting government can never be representative of the people's interests, no matter the circumstances, no matter how much the masses struggle. This, of course, leaves no room for progressive change.

"L.A. Noir," also published by Rockstar, is a 2011 pulpy period piece set in the 1940s. Unfortunately, it's not nearly as fun as "RDR." There's very little overarching story or character development to propel you forward, and the cases you work through could probably be played in any sequence, as you might watch the TV show "Law & Order," without missing much.

One investigation could be interpreted as an implicit criticism of Red Scare hysteria. The central protagonist, a police officer, investigates a series of suspicious fires he believes to be connected. The game leads you to charge a low-level gas company employee found in possession of anarchist pamphlets, specifically Peter Kropotkin's Law and Authority. And if I'm following the game's twists and turns correctly, the employee is actually innocent.

Another investigation, however, introduces us to a Communist character who, while also falsely charged, is the most unflattering representation of a leftist in either "L.A. Noir" or "RDR." The guy's insufferably snotty and just in case you didn't pick this up from what he says, he's wearing an ascot. I mean, an ascot? But it doesn't stop there. He looks down on working-class people and beats women, just in case you didn't get that he is a monstrous hypocrite too.

Overall, the perspective of "L.A. Noir" and "RDR" seems to be one of hipper-than-thou cynicism. While Rockstar does criticize the right wing, it casts equivalent doubt on the personal motivations of progressives and the feasibility of their goals. To accept this "neutral" view presumably leads to political disengagement  — which benefits the powers that be.

Of course, we live in a country where, according to Gallup, only 36 percent of the population has a positive view of socialism, however it may be defined. So it makes sense that a major game publisher would present an ambiguous-to-negative view of the left.

Still, Rockstar's output represents an increased engagement with class struggle issues that could lead a wider audience to investigate anti-capitalist ideas for themselves. And at this point in our history, when the largest socialist groups boast no more than a few thousand members and seem most interested in reenacting century-old sectarian squabbles, might dubious attention be better than none at all?