He may be a right-wing nut, but the Texas senator can beat a Democrat in a general election. Here's why 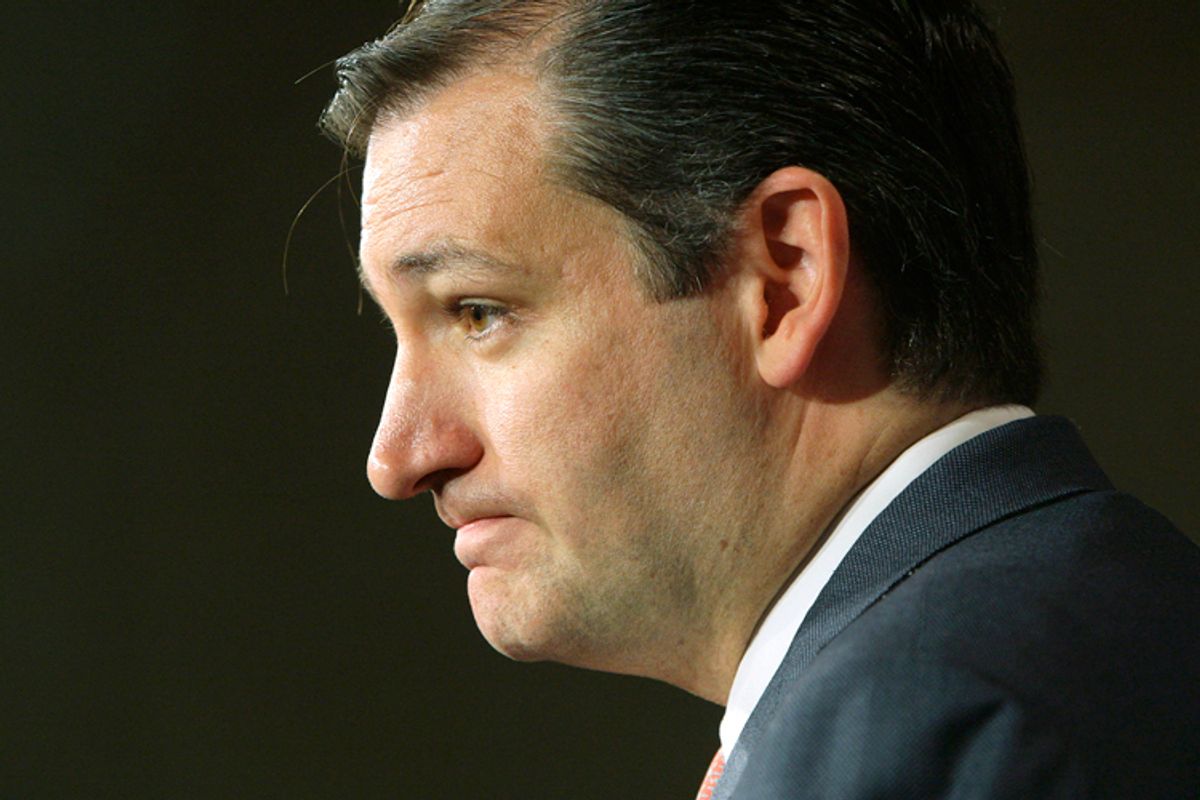 There’s been some more buzz this week about Ted Cruz’s presidential prospects. The demagoguing senator took his first trip to Iowa just six months after being sworn in to office, and he’s pretty clearly reaching for the White House. Early reports are that it’s going well. And Rich Yeselson wrote a high-profile (and fascinating) essay arguing that, basically, Cruz is perfectly positioned for reaching the top of the Republican ticket.

The focus of this piece is on Cruz's general election viability. When it comes to the primary, I’m not going to start handicapping the viable candidates seeking the Republican nomination yet; I’ll only say that I don’t see any reason not to include Cruz in that group, as of now. Viable candidates have conventional credentials and are in the mainstream of their party on questions of public policy. Cruz, from what we know now, qualifies. With four years in elected office by January 2017, he’ll be in a similar boat with Barack Obama (who, granted, had held lower office as well) and Mitt Romney (who at least had four full years before his campaign began). And while Cruz surely is planted at an edge of the Republican mainstream, I don’t see any reason, so far, to believe he’s close to falling off that edge. Whether or not Yeselson is correct that Cruz is a particularly strong candidate, it’s certainly very possible to see him nominated.

But what about the general election? Could he actually win?

What I hear from many liberals about Cruz’s chances are two things. One is just disbelief: Republicans wouldn’t really do something like nominate Cruz, would they? The key is that Ted Cruz isn’t Herman Cain or even Michele Bachmann; he’s a United States senator, and that counts for something (that is, conventional credentials count for something) in presidential elections. So, yes, they really could do something like that.

The other thing I hear, however, is perhaps even more wrong. Some liberals react by actively rooting for Cruz. The theory? The nuttier the nominee, the worse the chances of Republicans retaking the White House. Indeed, in conversation I’ve heard all sorts of justifications: Cruz couldn’t possibly win Florida! Therefore, he couldn’t win the White House!

Don’t listen to it.

The smart money play for liberals remains to root, in the Republican primary, for whichever candidate would make the best – or perhaps the least-worst – president.

The bottom line is that candidates just don’t matter all that much in presidential elections. Yes, a reputation for ideological extremism hurts, but it appears to hurt maybe 2 or 3 percentage points. Yes, George McGovern and Barry Goldwater had reputations for ideological extremism and were buried, but in both cases it was by a popular president during good times. Ronald Reagan wasn’t slowed much (although, still, some) by his conservative image. Don’t get me wrong: There’s no evidence for the opposite theory, that avoiding the squishy center (in either direction) will magically produce an avalanche of new voters who otherwise would have stayed home. Going moderate is better. It just isn’t all that much better.

Now, on top of that, it’s an open question whether Cruz would really wind up with a reputation as more of a fringe figure than any other plausible nominee. For one thing, the Republican nomination process may bring out inflamed rhetoric, but it’s also likely to create converging policy views among the candidates. Indeed, it’s not impossible to imagine a scenario in which Cruz wins the nomination as the hero of conservatives, which then leaves him far more free to pivot to the center in the general election race than a less trusted candidate might have. Granted, the other possibility is very real as well – Cruz spends the nomination fight solidifying his conservative reputation, and then finds it sticks with him no matter what he does later. And it’s worth noting that Mitt Romney’s reputation as relatively moderate managed to survive everything he did in in the entire 2012 election cycle.

The bottom line, however, is that Ted Cruz is unlikely to drop more than a couple points to the Democratic nominee. And that’s not likely to swing the election. Could it? Sure; even a small bump would have sunk the Republicans in 2000, for example. But most elections aren’t narrow enough for a couple of points to make a difference.

The only exception to this would be for someone who doesn’t even have conventional credentials. Nominate Cain or Bachmann, and it’s not difficult to believe that the penalty would be very large. There’s no way of knowing, however, because no one like that ever gets nominated. So, sure, root for them, but it ain’t gonna happen.

So what it all comes down to is if you really believe that Cruz is more dangerous as president than Marco Rubio, Paul Ryan, Chris Christie or the rest of the likely field, then you most definitely don’t want him in place just in case 2016 turns out to be a good year for Republicans.