Mandela was a boxer 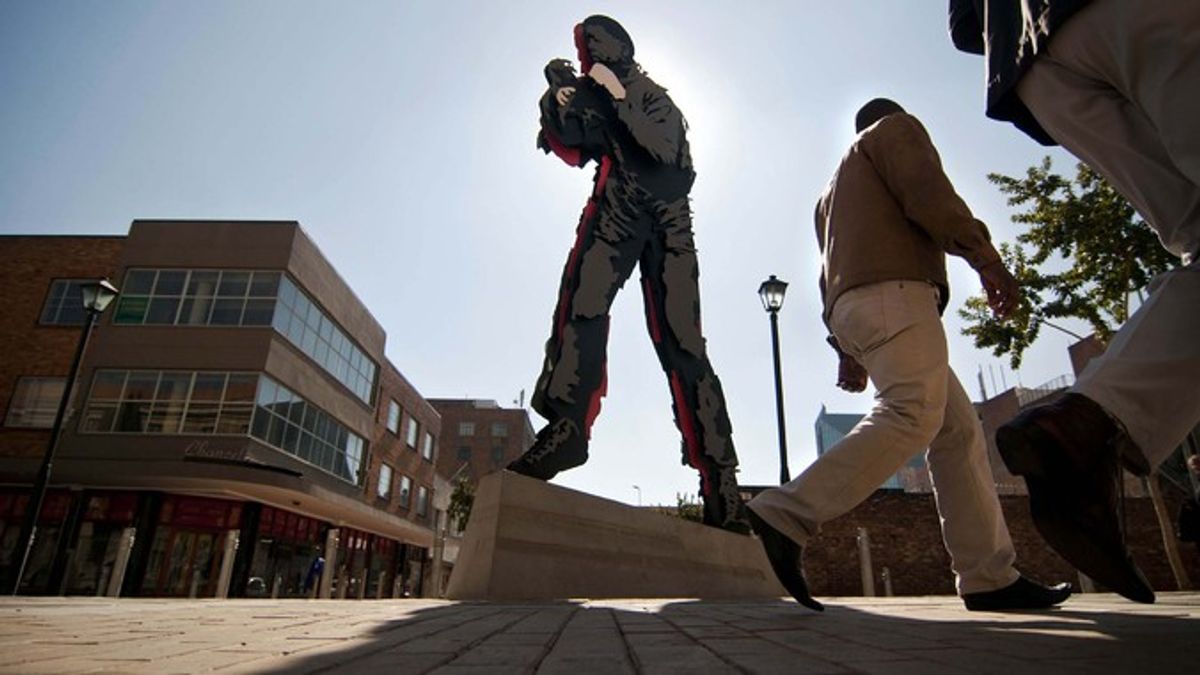 A traditional belief in Mexican culture is that there are three stages of death. Rudimentarily recounted, the first stage is physical death, our last breath; the second is when our bodies are lowered into the earth; the third is the last time our name is spoken, when there is no one left to remember us.

Nelson Mandela, who is in some part of the first phase at present and will almost certainly never reach the third, was -- among all the other things that made him one of the towering figures of the last century -- a boxing fan. A frankly aberrant, avid and feverishly passionate boxing fan. Before he took up the fight against apartheid, which was the fight that defined his life and ensured his legacy, Mandela was a boxer himself. At this late moment in his life, everything about Mandela is both more poignant and more significant. His love for boxing, this elemental, self-defeating, vital and troubled sport, is no different.

Marco Cianfanelli's "Shadow Boxing" is a sculpture of Mandela that’s five meters tall; it stands in front of the Magistrate's Court in Johannesburg, a route that the Mail and Guardian's Laurice Taitz notes, "that a young Mandela must have walked many times." The sculpture's steel plates are painted gray and black and its likeness is based on a photograph of Mandela sparring with professional boxer Jerry Moloi. The photograph was taken in 1953, on the rooftop of a building in the downtown core of the city. It was the same year Mandela opened a law firm with Oliver Tambo, which was the only African-run law firm in the country.

At the time, an Italian boxer from Boston, Rocky Marciano, was in the second of a four year reign as heavyweight champion of the world. Muhammad Ali was 11 years old, still named Cassius Clay, and seven years from his professional debut.

Less than ten years later, Mandela was in prison. His first sentence was five years of hard labor for inciting workers to strike and leaving the country without permission. Two years later, while still serving that sentence, he was charged again, this time for conspiracy to overthrow the government and four counts of sabotage. In the courtroom, he said, "I have cherished the ideal of a democratic and free society in which all persons live together in harmony and with equal opportunities. It is an ideal which I hope to live for and to achieve. But if needs be, it is an ideal for which I am prepared to die." And then Mandela was found guilty, after an eight month trial. He would spend the next 25 years of his life behind bars.

On the outside, the fight for equality and civil rights continued on his home front and in the United States. Four months before Mandela’s life sentence, Ali, 22 years old by that point, fought heavyweight champion Sonny Liston for the first time. Prior to the match, he told the press he was going to “float like a butterfly and sting like a bee.”

On February 25, 1964, in Miami, Ali defeated Liston in one of the biggest boxing upsets of all time. The victory earned him The Ring, WBA and WBC World Heavyweight titles. It also earned him the attention of the world.

Ali took up his own causes outside of boxing, of course. He refused to fight in the Vietnam War, a stance that led him to be banned from boxing for three years and robbed him of the prime of his career. He spent some of that time attending rallies and giving speeches at universities and colleges across the country. His fierce and boldly expressed anti-war beliefs and champion’s charisma made him one of the more complicated and compelling icons of his generation. By the time Ali got back in the ring, he was much more than a boxer, and lent the sport a vast and peculiar cultural relevance. Simply because of its association with Ali, boxing seemed a vehicle for change. Boxing would never seem quite so great or important again. It was, maybe, the last time that fighters as diverse in their aims and approaches as Mandela and Ali could both fit within the sport.

Boxing is doing better than you’ve probably heard, but it is undeniably and increasingly not what it was when it mattered most. It is, like a great many other things, governed by idiotic internecine politics and crude greed, and hampered by a self-defeating scuzziness. But buried beneath it all, its tough roots -- primal and honest and essential -- still remain.

The 1920’s are widely regarded as the golden age of boxing. It was newly legalized, fashionable, and exciting. But defining a golden era in any sport is often misleading and colored by nostalgia. In the late 1700’s boxing reached America; the great fights of the late 1800’s are still baffling, awe-inspiring and outsized. Golden ages bumped up against each other throughout the first half of the 20th Century, and the 1960s brought the Ali era; there were miniature renaissances in years after that centered around Sugar Ray Leonard and Mike Tyson. Each of these epochs carries its own importance, culturally and otherwise. The same, we might as well assume, will someday apply to today’s diminished boxing scene.

Now, the sport is in transition. While its popularity in America dwindles, it continues to remain not just relevant but vital in the rest of the world. It is changing, as such things do, and attracting new fans and fighters who will change it further in the years to come. Like all things popular and consumed, its lifespan is cyclical. Boxing is not finished; fighting is not going to get any less central to the experience of being human. It’s one of the truest things people do.

Mandela, of course, understood this. In his autobiography Long Walk to Freedom, he wrote:

“Boxing is egalitarian. In the ring, rank, age, color, and wealth are irrelevant…I never did any real fighting after I entered politics. My main interest was in training; I found the rigorous exercise to be an excellent outlet for tension and stress. After a strenuous workout, I felt both mentally and physically lighter. It was a way of losing myself in something that was not the struggle. After an evening’s workout I would wake up the next morning feeling strong and refreshed, ready to take up the fight again.”

Sports are representative of the culture in which they reside and arguably no sport is wrapped more intrinsically around in-the-moment culture than boxing. Beyond its elemental, binary objectivity, it has ties to gender, race, and class. Beyond that shifting subtext, though, is an essential truth at the center of it: one fighter wins and one loses. The fight is a struggle, a contest that’s representative and reflective of the individual fighters in the ring, but also of much more than that. The fighters are concerned with the first part, as they must be. The rest of it is us.

When we lose Mandela, a loss that will reverberate globally, boxing will lose one of its most important and powerful proponents. One of history’s great fighters, he lent a richness to the sport simply by his association with it. His kinship with and closeness to boxing’s central struggle defined him, and ennobled the sport by projecting its hard, simple binaries outward into the world.

Mandela’s name will never reach that third and final stage of death; his legacy is too salient, too pervasive and too defiant and too strong. Boxing is in trouble, as it often is; it’s a business and a sport. Fighting, as Mandela defined, understood and exemplified it, is a bigger thing, and forever.

Sam Riches is a writer with an interest in sports and culture. He lives, sometimes, in Whitehorse, Yukon and sometimes in Toronto, Ontario. He tweets, mostly about basketball and bicycles, here: @Sam_Riches.