Before Trayvon Martin, there was Oscar Grant 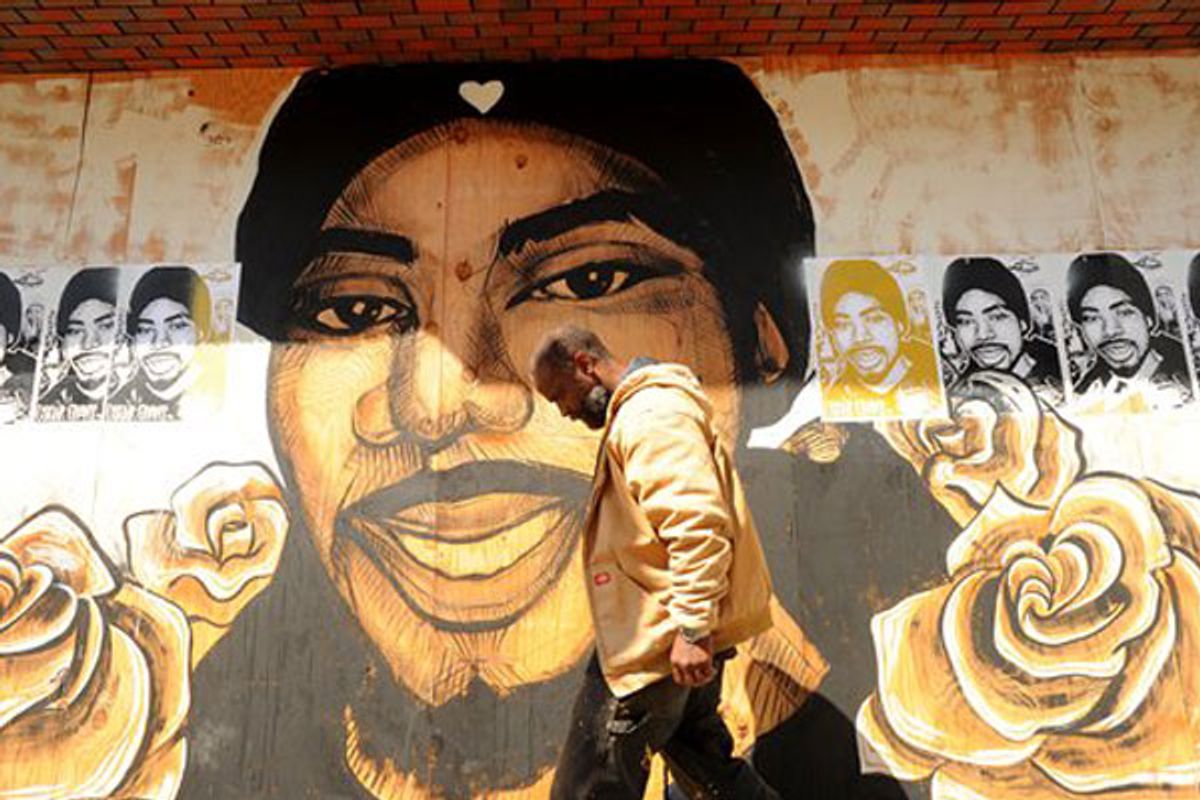 A mural by street artist LNY, with some help from artists COST, ENX, and Ellis Gallagher, now dominates the very busy corner of Bedford Avenue and North 6th Street in Williamsburg, Brooklyn. The work is a creative commission meant to coincide with the release of Fruitvale Station, an indy film that tells the story of Oscar Grant, a 22-year-old Bay Area resident who was fatally shot in the back by a BART Police officer on the night of New Year’s Eve 2009. The film debuted at this year’s Sundance Film Festival and won its writer and director, Ryan Coogler, the festival’s Grand Jury Prize and the Audience Award for US dramatic film. The film had a limited national released last week.

“The production company contacted me to create an original work based on the film, which itself is based on the tragically short life of Oscar Grant,”  artist LNY told Hyperallergic. “Johannes Mehserle, the officer who shot Grant, ended up being convicted for involuntary manslaughter and was released from jail by the summer of 2011.”

Grant’s death galvanized the Bay Area, and soon peaceful protests and not so peaceful riots followed the sentencing along with grassroots artistic actions in the form of murals, street art, and T-shirts.

“The movie itself follows this public discourse of memorializing but it does so in the language of film, which of course is very different than that of public art … one of the first things I had to do for the project was watch a screening of the film and it really moved me … from then on I began working on this idea of a public memorial that would not only speak about Oscar Grant but about all of us,” he says.

The mural in progress last week.

“His murder resonates with all of us because of it’s pointlessness — much like the death of Trayvon Martin or the brutal beating of Rodney King; these acts only take away from our humanity and shared ideals as a country,” he says. “I can’t see why a mural about Oscar Grant, the everyman symbol for perpetrated injustice, would not speak to New Yorkers and to their struggles.”

LNY includes the phrase “I am Oscar Grant,” which materialized organically on signs and T-shirts during protests and the trial that followed Grant’s death. “To me this statement claims social responsibility for Grant’s death and for all the reasons that would allow this tragedy to happen. The mural declares ‘We are Oscar Grant’ as my own riff on this motto showing that we all share this responsibility whether we like or not,” he says. “The content then follows this idea and depicts a mixed group of people; friends, neighbors from Newark, people I have met while traveling, all regular and nondescript individuals who become iconic, elevated, and celebrated by the language of public representation.”