Drones: Not just for killing anymore 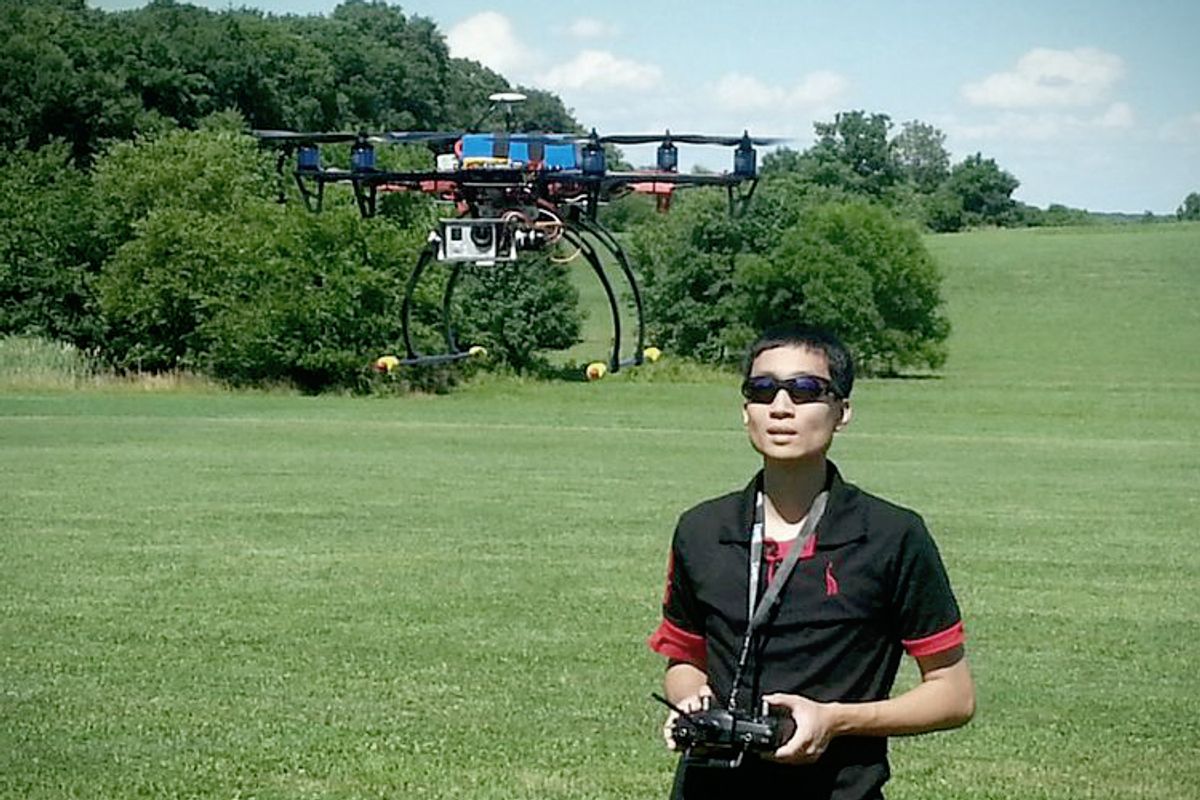 The six propellers on Doug Bennett's drone started spinning, slowly at first and then much faster. It took off in the empty field in Leesburg, Virginia, no buildings or cars in sight. Bennett looked up towards the drone at the cloudless sky, but he didn't need to; he was wearing video goggles that transmit a drone's-eye view back to him.

"It's called first-person video," Bennett, a 20-something art school graduate, said. "It's essentially the same thing as a military drone, from a hobby perspective."

He was wearing a "ground station backpack" filled with cables, batteries and a video receiver--a couple hundred bucks worth of equipment—that made this all possible.

A crowd gathered around him, including his girlfriend and a handful of fellow drone enthusiasts from around the Washington, D.C. area. They grilled Bennett on how he makes it all work.

These enthusiasts--a former soldier, a Hewlett-Packard analyst, a 15-year-old science and tech student from Baltimore, representatives from the burgeoning unmanned aerial vehicle industry--make up the more than 400-strong DC Area Drone User Group, which claims to be the country's largest and most active set of drone hobbyists. Roughly 50 of them attended the gathering in Leesburg.

Founded by Timothy Reuter, who works with USAID's Feed the Future group, the group is dedicated to "promoting the use of flying robots for community service, entrepreneurial, and recreational purposes," he said. Reuter makes regular appearances at drone events around town and wants to prove that drones aren't just spying and killing machines.

"We're trying to change the notion about what drones are for," he says. "We're creating a social movement that is taking a technology traditionally associated with the military and the surveillance state and trying to turn it into a tool for citizens and communities."

Early last year, Reuter, looking for a hobby, decided to try to build a robot at HacDC, a local hackerspace. Deciding what type of robot to build, he soon realized there was only one choice.“The only thing cooler than a robot would be a flying robot,” he said.

But he soon realized that assembling and flying a drone isn’t easy. A longtime organizer with USAID, he decided to start the Drone User Group to find like-minded people who could help him build and operate his own drone. The group took off faster than he expected, and when he saw what people wanted to do with them, he realized it was more than a hobby for most of the group’s members.

“My thinking has evolved from a focus on the technology for its own sake to exploring what can be done with the technology,” he says. “The systems have evolved to the point where what used to seem like an RC toy can now be used as a tool for a variety of applications such as taking pictures of your child's birthday party, monitoring the health of plant life at a community park or delivering a ring at a wedding.”

Even after you forget about the targeted assassinations, Reuter’s mission is complicated by incidents such as one that occurred in Seattle in May: According to a woman there, a "stranger set an aerial drone into flight over [her] yard … the man insisted that it is legal for him to fly an aerial drone over our yard and adjacent to our windows. He noted that the drone has a camera, which transmits images he viewed through a set of glasses. He purported to be doing 'research.'"

Nearly every drone flying over the field in Leesburg was outfitted with a camera. Last month, Reuter floated the idea of starting a drone search and rescue team, and more than 25 group members participated in a conference call about the topic.

"We have a pool of incredibly talented people with a lot of neat equipment," he says. "We're trying to build on that with what, to my knowledge, will be the first volunteer drone search and rescue team in the world."

It's not too farfetched an idea: A poll released in June by Duke University suggested that 88 percent of Americans support the use of drones for search and rescue.

And it has worked. Shortly after midnight on May 9, police in St. Denis, Saskatchewan used a Dragan Flyer X4-ES, a small drone, to locate a driver who had rolled his car and was trapped in the mountains. According to police there, the drone's infrared camera likely saved the man's life.

The driver was "curled up in a ball at the base of a tree next to a snow bank. He was unresponsive and was quickly brought out to the road by Fire/Rescue and placed in an ambulance and was transported to hospital in Saskatoon. Without the UAV and FLIR, searchers would not have been able to locate the driver until daylight," the Royal Canadian Mounted Police said in a statement.

But some big problems need to be solved. For one, the FAA currently bans flying a drone outside your line of sight. Secondly, the drone user group operates under an FAA exception that allows hobbyists to fly "model aircraft." It's unlikely that a drone search and rescue team could use the same exemption. Finally, local search and rescue teams probably won’t just let a bunch of amateur drone users join them on searches.

"You have to do quite a bit of training to deploy on search missions in any capacity," said Jennifer Massey, head of nearby Fairfax County's Urban Search and Rescue Team's K9 unit. "There's a skill set involved--land navigation skills, learning about missing person behavior, learning how to work terrain."

Her colleague, Chris Schass, of Virginia Task Force 1 (which is sponsored by the Fairfax County Fire and Rescue Department), one of the most experienced search and rescue teams in the world, agrees.

"Anytime there's a new technology that could assist us, we're interested," he said. “But it has to be done the right way. If citizens show up and call themselves Drone Team One and say they're there to assist, I think it'd be difficult for our operators to integrate them."

Reuter knows that rushing into it is going to harm his long-term goal of gaining widespread acceptance for drones. Rather than having his team go out on its own, he hopes to partner with existing search and rescue teams to provide them with an additional set of eyes in the sky.

"I'm not sure we're quite there yet," Reuter says. "To have people wildcatting with a bunch of stuff they're throwing in the sky could end up hurting people and that's not what we want … we need to make sure that people have the skills as pilots. Flying what's called first-person view is a different kind of challenge than just flying line of sight."

According to Gustavo Zastrow, the group's director of online operations, there are two types of drone pilots. "There's people who have a background in RC airplanes. They're flying fixed wings, the ones that look like an airplane," he says. "Then there's the people in IT. They're programmers and system designers that just like playing with technology. For [IT people], it's easier to have a quadcopter. They're simpler to fly."

Bennett falls more into the second category. Minutes later, with FPV activated, he lost control of his drone and it plummeted to the ground. The maybe 40-foot fall happened seemingly without warning."It can be dangerous," Bennett said.

Later he posted a video showing the drone's motor cut out due to a bearing failure. The drone can be fixed, but you don’t want a crash when you're looking for a missing person.

Besides the litany of privacy issues being raised by groups like the American Civil Liberties Union, city and state legislatures around the country, and that woman in Seattle, safety is the main thing holding drones back from delivering your pizza, taking photos at your wedding, or, yes, finding you when you're lost in the woods.

It's also one thing that the Association for Unmanned Vehicle Systems International says needs to be addressed. The huge trade group insists that drones will create 70,000 new jobs in the United States in the five years after the FAA legalizes their commercial use. It has called privacy a "distraction" from the goal of thousands of drones flying in our skies.

During the two hours I was at the group's fly-in, there were at least two crashes and numerous radio frequency mix-ups (video feed from one drone being transmitted back to someone else). Other would-be pilots stood on the sidelines, leaving their drones in their cars rather than risking them.

"Gosh, I've lost count of how many times I've crashed it," says James Culfogienis, an analyst for Hewlett-Packard. A jury-rigged Tupperware container protects his drone's precious components. "I keep a box of broken parts back at home."

Flying a drone isn't particularly easy. I couldn't even bring myself to ask anyone if I could fly one. Many of them have put countless hours into building their drone. Even experienced pilots still crash drones: A motor fails, batteries die, a gust of wind knocks a drone into a tree. And experience is relative; few have been flying for more than a year or two.

"We're trying to figure out how to go from hobbyist-grade equipment to being able to do high-level, real-world impactful applications," Reuter said. "It's a long journey, but I think if we keep slogging away at it, we can get there."

Jason Koebler is a Washington, D.C.-based science and tech writer for Vice´s Motherboard. Follow him on Twitter @jason_koebler.