From Hitchens to Dawkins: Where are the women of New Atheism?

The most prominent faithless are white men. The movement needs to take a look at itself — and church history 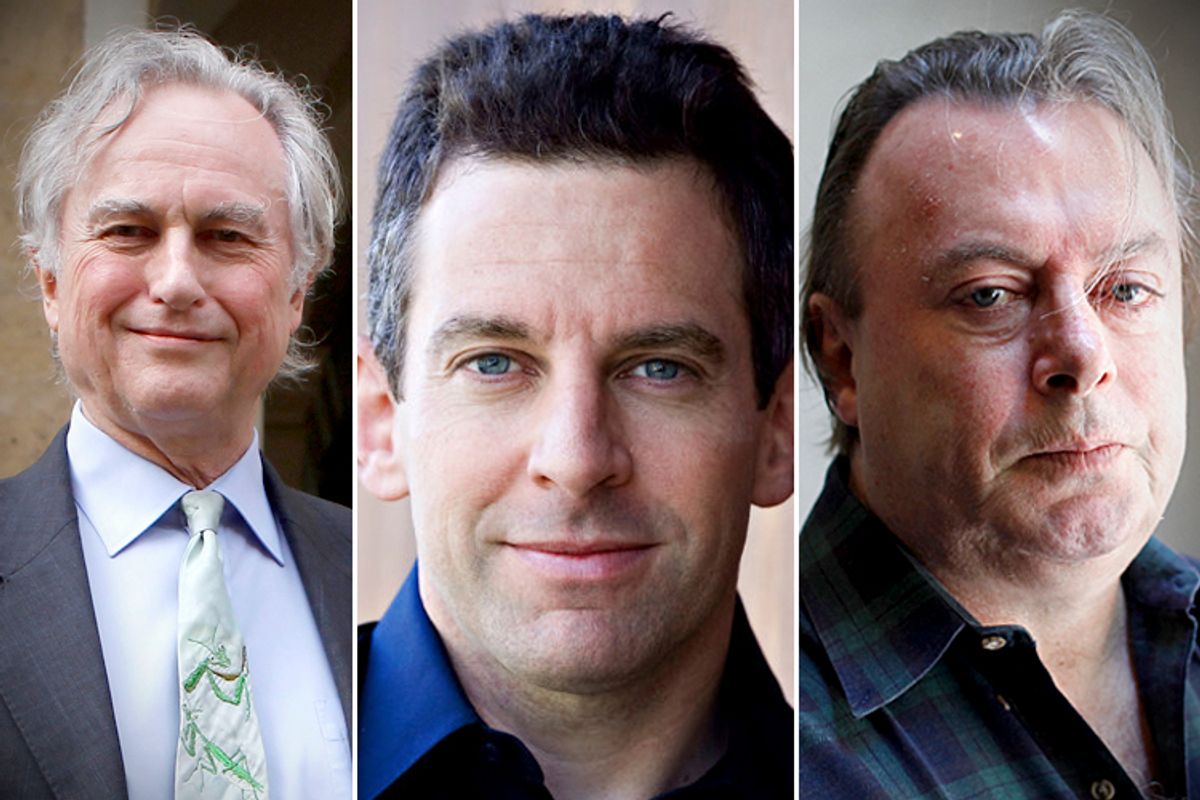 "Let your women keep silence in the churches: for it is not permitted unto them to speak; but they are commanded to be under obedience, as also saith the law. And if they will learn any thing, let them ask their husbands at home: for it is a shame for women to speak in the church."
--I Corinthians xiv. 34-5

"New Atheism" is old news. Enter "New, New Atheism": the next generation, with its more spiritual brand of non-belief, and its ambition to build an atheist church. It is an important moment for the faithless. Will it include women?

Several years ago, there was discussion of a “woman problem” within the Atheist movement. New high priests of non-faith announced themselves—Richard Dawkins, Christopher Hitchens, Sam Harris, Peter Singer, A.C. Grayling, Daniel Dennett, etc.—and they were men. And they were angry. Their best-selling works were important and essential. These authors helped reinvigorate the secular cause; they cast off the fog of political correctness to unapologetically lay siege to piety. But before long, these New Atheists were depicted as an old boys’ club—a clique of (white) men, bound by a particularly unyielding brand of disbelief.

Where were the women?

Why, they were right there: stolidly leading people away from the fold. They were irreverent bloggers and institution founders. And scholars. Around the time that the Dawkins-Hitchens-Harris tripartite published its big wave of Atheist critique, historian Jennifer Michael Hecht published "Doubt" and journalist Susan Jacoby published "Freethinkers"—both critically acclaimed. And yet, these women, and many others, failed to emerge as public figures, household names. “Nobody talked about [Doubt] as a ‘phenomenon,’” Hecht has noted. “They just talked about the book.” What gives?

The lady Atheist has a troubled history—its European chapter rooted in the French Revolution, which otherwise cleared ground for a bolder irreligion.

In the 1770s, the French philosopher Baron d’Holbach observed a dearth of “incredulous women or female atheists,” reasoning that women were biologically more “disposed to credulity.”

Where they were found, female atheists were considered especially noxious. In his 1738 poem "London," the famed British writer Samuel Johnson cast women as urban leeches:

Her falling Houses thunder on your Head,
And here a female Atheist talks you dead.

Atheists have been rare, since nature’s birth;
Till now, she-atheists ne’er appear’d on earth.

In some cases, men simply could not conceive of a female Atheist (just as, for centuries, they rejected the possibility of a female homosexual). In 1806, an issue of London’s La Belle Assemblée magazine revealed such suspicion, in an essay entitled “Character of the Atheist Woman”:

How is it possible, for example to conceive that a female can be an Atheist? What shall sustain this reed if religion does not support her frailty? For the sake of her beauty alone, women ought to be pious. (The author goes on to imagine, in great detail, the death of an Atheist wretch, whom nobody would mourn.)

In a private letter written in the 1760s, the English essayist Bonnell Thornton was overwhelmed by disgust brought on by the “female atheist:”

In 1813, the famed doctor Thomas Cogan (founder of the Royal Humane Society) observed:

Men contemplate a female atheist with more disgust and horror than if she possessed the hardest features embossed with carbuncles.

In his excellent book on Samuel Johnson, Northwestern University professor Lawrence I. Lipking reasons that Johnson’s poem was a reaction to the rise of a controversial female preacher in the 1730s. She was also a shovel-ready stand-in for a degenerate modernity.

In the end, a female atheist was more than a walking blaspheme. She was a tear in the social fabric—and a menace to all.

By most statistical accounts, women are more devout. In countries like Britain and the United States, irreligion is spreading—but women are less likely to be Atheists. According to data from a recent World Values Survey, while 3.6 percent of American men identify absolutely as “Atheist,” just 1.2 percent of women do the same. Those numbers rise to 11.6 percent and 9.3 percent respectively in Britain.

But this demography is not sufficient to explain the relative dearth of prominent female Atheists. These missing women have been discussed at length: in publications like Freethinker and Ms., at the Center for Inquiry’s 2012 and 2013 “Women in Secularism” conferences, and by countless local organizations.

Writers have suggested that the doggedness of New Atheism tends to turn off women—and that, for social reasons, women don’t muster the same militancy when defending their (non)beliefs. Others have looked to sexism within the Atheist community (read: Elevatorgate). A few have made unconvincing references to biology. And some academics blame the fact that churches have pulled a retroactive fast one on history: falsely claiming credit for progress on the women’s front.

Or perhaps it’s all a mirage? In a 2011 article in Bitch, journalist Victoria Bekiempis made the provocative claim that the “showboating [Atheist] boys’ club” is a media construct. She notes that around 2006, several news articles were published describing Dawkins et al. as a “band of intellectual brothers”: Atheism’s bullheaded bro-elite. That image—with its tidy narrative and ready stock characters—stuck. Bekiempis’s advice: “Let’s reframe. For every mention of Hitchens, counter with a mention of Hecht.”

Susan Jacoby, author of "Freethinkers," has pointed to a kind of inter-movement antagonism. In an attempt to win over right-wingers, she argues, Atheists have been too timid in their assertion of women’s rights. Of course, history teaches that movements for change, even when they conceptually overlap, don’t always hold hands. Too great are concerns about alienating supporters and diluting the cause brand.

Will things be different in a church of “New, New Atheism”? Over the last few months, several secular churches have broken ground in Britain, North America and elsewhere. The Sunday Assembly (which I profiled for Salon in April) was launched in London by two comedians—to much fanfare. With new branches in Melbourne and New York, the Assembly has plans to open 40 American outposts this autumn. The guiding tenet of the Assembly is that Atheists have something to gain from the structures of a traditional church (or mosque, or synagogue): a sense of community, thoughtful lectures, periods of respite and occasions for moral contemplation.

The Sunday Assembly was started by a male-female duo of stand-up comics. But the other secular founders are men, as are Harvard’s two Humanist chaplains. The sample is too small to be conclusive, but this early paucity of women is something to keep an eye on.

Let Atheism have its waves, and secularism its churches. But if Atheists are going to use “church,” as a word and an organizational model, they should pay heed to the long legacy of women’s oppression and torment that the Church represents. New Atheist churches should be active in their inclusivity, aggressively seeking out diversity in leadership and attending directly to issues of women’s rights. In addition: If you are a woman and an Atheist, and the idea of a secular church appeals to you, now would be a really good time to stand up and be counted.

Women have been preached at, by men, since the days of yore. Let us be wary not to give up the pulpit of non-belief too.