Scott Roeder got life in prison for killing the abortion provider. Now a SCOTUS decision could someday mean freedom 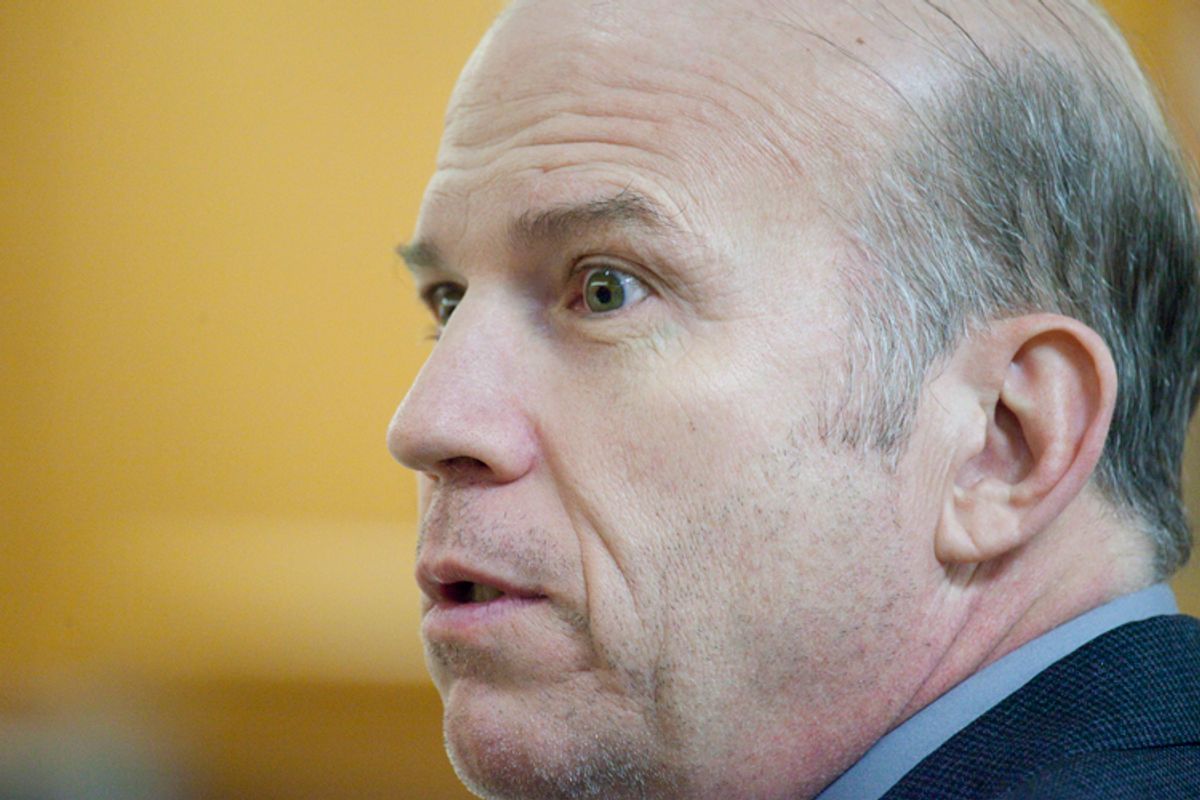 Scott Roeder at his trial in Wichita, Kan. (AP/Mike Hutmacher)
--

A June Supreme Court decision on mandatory minimum sentences could help Scott Roeder, the convicted killer of Kansas abortion doctor George Tiller, significantly reduce the number of years before he is eligible for parole. In essence, what once was a life sentence with effectively no chance of parole could potentially result in Roeder attaining freedom in his 70s.

In 2010, Roeder was found guilty of first-degree murder in the killing of Tiller, who was shot in his church in 2009. Roeder, now 55, admitted on the witness stand to the shooting and was sentenced to life in prison with the opportunity for parole after 50 years -- what's known as a "Hard 50" sentence.

But, as the The Wichita Eagle pointed out, the Supreme Court decision in Alleyne v. United States has created a set of murky circumstances for prosecutors seeking "Hard 50" sentences, and raises the possibility that Roeder, whose case is being appealed, could now be eligible for parole after 25 years. The decision has already caused prosecutors to abandon a plan to seek that sentence for a different convicted murderer. From the Eagle:

The ruling also may force prosecutors to abandon plans to seek hard 50 sentences in some other cases, including the case of a Wichita man who was convicted last week of stomping his girlfriend to death with steel-toed boots. It could prevent the state from seeking a hard 50 for a man convicted last month of strangling a Wichita woman in 2011 while on parole for murdering a woman in Lawrence more than two decades earlier.

In the Alleyne case, Allen Alleyne was convicted for a 2009 robbery in Virginia, during which his partner used a gun to threaten a convenience store manager. Alleyne was charged with two counts, one for robbery that affects interstate commerce, and one for “using or carrying a firearm in relation to a crime of violence.” Under the pertinent federal statute, the minimum for this second count is five years, but increases to seven years if the weapon is "brandished," and ten if it is "discharged."

Though a jury convicted Alleyne of using a weapon, it did not rule on whether it was "brandished." But the sentencing judge determined that Alleyne could have foreseen that his partner would "brandish" a gun, and therefore increased Alleyne's sentence from five to seven years.

In a 5-4 vote, the Supreme Court held that this was inconsistent with Alleyne's Sixth Amendment rights for the jury, rather than a judge, to find that the "brandished" element was satisfied. "[The essential Sixth Amendment inquiry is whether a fact is an element of the crime," wrote Justice Clarence Thomas in the majority opinion. "When a finding of fact alters the legally prescribed punishment so as to aggravate it, the fact necessarily forms a constituent part of a new offense and must be submitted to the jury."

In the Roeder case, as with all "Hard 50" cases in Kansas, a judge determined Roeder's sentence based on factors set forth in Kansas's criminal statutes. The statute in question says that when considering whether to hand down a "Hard 50" sentence, "the court may be presented evidence concerning any matter that the court deems relevant to the question of sentence and shall include matters relating to any of the aggravating circumstances...and any mitigating circumstances."

In Roeder's case, the sentence was imposed "in part because of premeditation, a lack of remorse and the fact that he committed the murder in a church," but also because the judge said there was evidence that Roeder stalked Tiller for years before he killed him, the Associated Press reported.

“The hard 50 is dead as far as it exists in Kansas right now,” defense attorney Richard Ney said. “For cases that are not final, and Roeder would be one of them, I think they’re certainly in question.” He added that the solution might be to implement a system that includes a separate sentencing trial by jury for those cases where prosecutors are seeking a "Hard 50" sentence for those found guilty of first-degree murder.

As Mike Gottlieb wrote for SCOTUSblog, the full range of the effects from Alleyne are unknown, but "As a practical matter, prosecutors will now have to submit additional facts to juries before they can ask judges to apply a wide range of mandatory minimum sentences prescribed by federal statutes."