A kid is not a luxury item 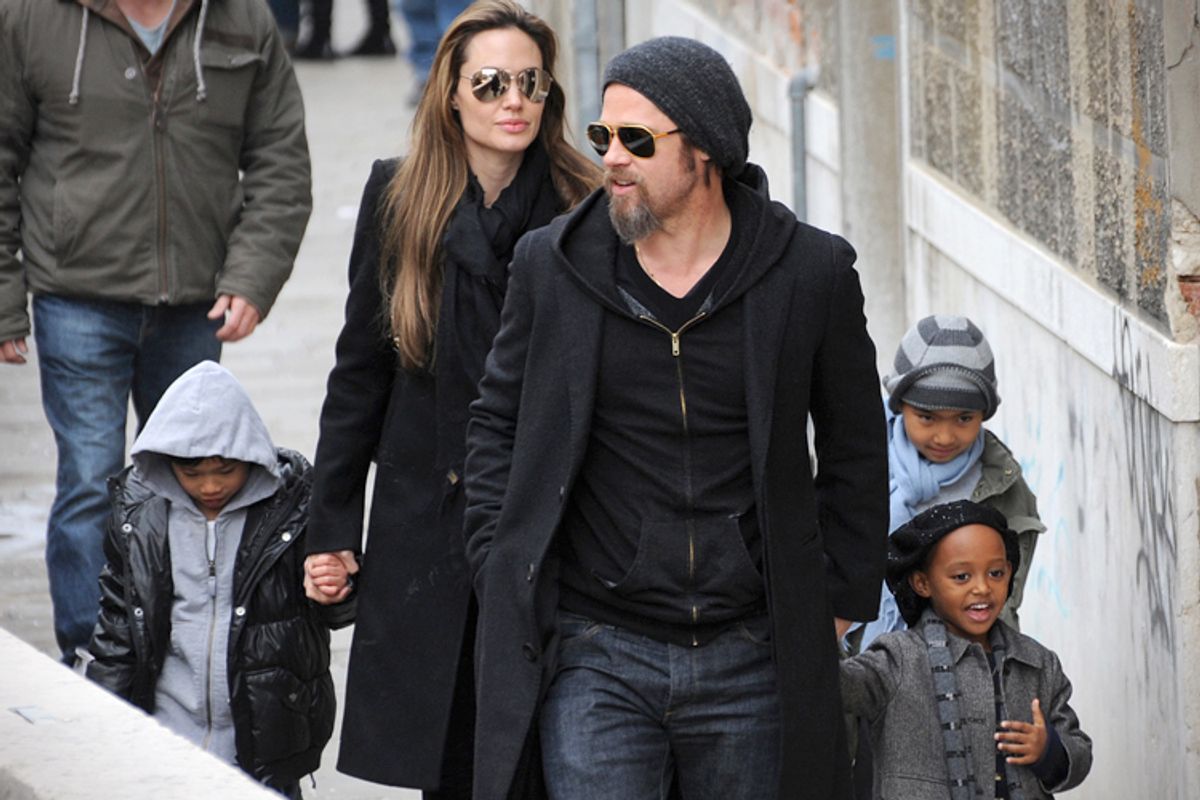 "Ryan Reynolds is just like you,” writes Adam Sachs in this month's Details. Movie star Reynolds and his wife, Blake Lively, also an actor, want to have a big family – four, maybe five, kids, maybe more. (Last year, in Allure, Lively said, “I'd love 30 kids if I could.”) Except, unlike most of us, Reynolds and Lively can do that – have a lot of kids and blithely announce their big-brood plans without expecting any blowback – because they're rich.

They might be living large, these profiles tell us, but celebrities are just like us – only with more money, more houses, more cars and, apparently, more kids. That's why Ryan Reynolds is such an ordinary guy. It's pretty ordinary to have a family. People have been doing it forever.

But having children, we tell ourselves and each other, isn't an ordinary human activity; it's a unique and personal choice. Perhaps even a selfish one – an indulgence that, in this uncertain economy, most of us can't afford. The country, some legislators and pundits and citizens will argue, certainly can't afford and shouldn't have to pay for social programs and policies that support parents and families. We don't talk about having children as though having them and raising them is a predictable fact of life at every income level and for every ethnicity, everywhere in the world; we talk about it – and legislate around it – as though kids are, or should be, a privilege of the privileged. Four or five or one or two or any at all: Children are a choice and a luxury.

Is it prestigious to have more than one or two kids? Tina Fey says yes: “All over Manhattan, large families have become a status symbol. Four beautiful children named after kings and pieces of fruit are a way of saying, ‘I can afford a four-bedroom apartment and a hundred and fifty thousand dollars in elementary-school tuition fees each year. How you livin’?"

Journalists have been pushing this idea for a while – in 1997, Slate's Ronald Bailey wrote that “the rich not only have more money, they may also have more children”– so after Fey's New Yorker essay in 2011, they rushed to agree. “Meet NYC's Supersized Families,” urged the New York Post. “For a Few, the More the Merrier,” declared Time, and most pointedly and critically, “Are Rich Americans Having More Kids?” asked the Grist – a question the economist bloggers at Freakonomics tried to answer, empirically, by analyzing whether kids are “normal goods” or “inferior goods.”

Even the gays are getting in on it! “Which of these is your kid – Social Experiment, Status Symbol, or tool of The Gay Agenda?” asks Bill Delaney, blogger for Guys With Kids and father of three, with more than a touch of sarcasm and righteous exasperation.

But maybe children are being displayed as status symbols – and not just by the super-rich but by the oversharing parents in our Facebook feeds. "Unfortunately being a parent has become incredibly costly," says  Blair Koenig, author of "STFU, Parents," a  book and wildly popular blog about "the jaw-dropping, self-indulgent, and occasionally rage-inducing world of parent overshare."  The sheer cost of raising children plus the competition among parents and between parents and non-parents "feeds into a mentality that children are gems, treasures" to be itemized, documented, bragged about and even argued about on social media. "It's sad," Koenig says, because "parents should have support." She continues, "It is kind of a luxury. I don't think I could afford to have a child in New York. It's just too expensive ... Children are not hobbies."

Jezebel's Erin Gloria Ryan takes it a step further. Having any kids at all is an outdated luxury – “so 10 years ago,” she writes – because “prolonged economic uncertainty among the middle class means baby having becomes the realm of the rich or irresponsible or irresponsibly quixotic.” In other words, “Americans are having fewer babies because kids are just too fucking expensive, and that's not going to change any time soon.”

Expensive or not, raising children has never been a special project of the few or the unique province of the rich and middle class. It's simply something most adults tend to do – and they do so as much by chance as by choice. According to the CDC, 49 percent of pregnancies in the United States are unintended, as are 37 percent of all births.

"It's just the organic outgrowth of adult life,” says Stacia L. Brown, writer and founder of Beyond Baby Mamas. “It's what happens to most adults. We're socialized to build families, whether marriage is involved or not, whether children are involved or not ... but you don't always meticulously plan life like that."

Planned or unplanned -- and "people who make that decision cautiously are to be commended," says Brown -- having a family is a predictable facet of adult life and,  increasingly, both a luxury and a hardship. For black parents, Brown says, the suffering is especially acute. “It's not only an economic luxury for us – our children are dying. The luxury is actually seeing them make it to adulthood and become productive members of society without being gunned down. The stakes are a lot different in these conversations about luxury. For us, it's economic, and that's always been an issue of ours, but it's also survival in a very literal sense.”

And then there's the shaming. Black single mothers are “particularly indicted,” says Brown, and Kim Jackson, a 32-year-old single mother of one and marketing specialist in Baltimore, agrees. “There's definitely a stigma,” says Jackson, “especially for African-Americans. I was always the golden child, the one who got good grades, who won awards, so when I became pregnant in my senior year of college and had a baby at 19, people saw me differently. Suddenly I was just another statistic, which was to be expected, because 'that's how you people do' ... And in the beginning, before my friends started having children, I was alone.”

"It's the ritual, tribal abandonment of mothers,” writes Jeanne Denney, a therapist in suburban New York and mother of four adult children. And this collective emotional rejection, she tells me by phone, comes “with the model that parenting is a hobby. It's like having a pet – well, you're a dog lover, you're a kid lover. But this is not a hobby. We're denying how our children need many more resources than any one or two people can provide.”

American politicians still talk a big game about family values. But here are America's family values: no national, paid maternity leave – even though Pew Research reports that 47 percent of American women and 65 percent of married women with children work outside the home. No publicly funded childcare – although once the same kids are old enough for kindergarten, it's a given that governments should pay for schooling. No universal health insurance, so if you're not covered by commercial medical insurance through your employer or aren't poor enough to qualify for Medicaid – 15.7 percent of Americans or a whopping 48.6 million people fall through that crack and are without any medical insurance at all – medical care for pregnancy and birth can cost anywhere from $30,000 to $50,000. (The median U.S. household income in 2011? $50,054.00.) And if your teenage son goes to the store to get some Skittles and commits the crime of walking while black and wearing a hoodie, or does something truly outrageous and sinister like go for a drive with a friend, he might not return home alive (Trayvon Martin, Rakeish Brown). Social policies (or lack thereof) aren't irrelevant, abstract sword-fights and pissing matches. What goes on in houses of legislature matters in every house.

And when nonprofits organize to fill material gaps, like the National Diaper Bank Network does, they're criticized for enabling people who make irresponsible, selfish decisions to have children. After all, if you can't afford kids, don't have them. Haven't you heard? Children are a luxury.

Except they're not. Becoming a parent isn't a role every adult must automatically assume – no one should be forced to have babies they don't want, you hear that, Texas? – but having children is pretty common for people at all income levels. It's how every single one of us got here. Yet we collectively practice a kind of social and political tough love for families: “You did this, now fix it,” says Jackson, and good luck and God bless. No wonder, as Koenig wryly documents, some parents are desperately oversharing on Facebook; maybe, as Denney suggests, they feel so "isolated, exhausted, depressed and alone" that social media becomes a source of support. The ordinary and extraordinarily grueling activity of raising children becomes a lonesome and sometimes perilous slog when it's constructed as a selfish personal choice, a luxury and a hobby that no one else – not your friends on Facebook, your employers or your governments -- should have to hear about, support or even “like.”

Unless, of course, you're a rich, married celebrity. Then it's front-cover news that you want to have a family, maybe even a big one, because you're just like us.

Kelly Diels is a writer and the founder of Cleavage, an online magazine about the lines that shape us. Like her on Facebook: http://www.facebook.com/CleavageByKellyDiels.