Christie may be forced to quit as governor

If he runs for president, obscure rules could doom the governor's fundraising. Unless he leaves office 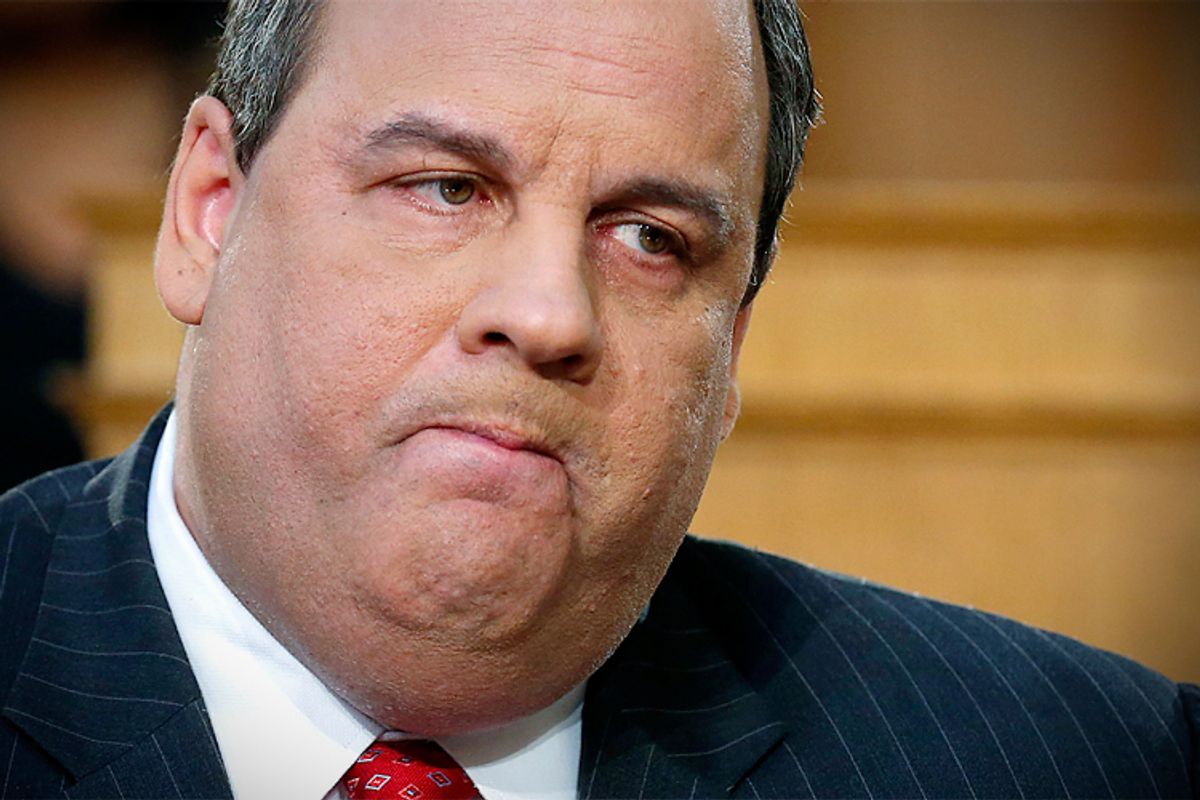 If the polls are right and Chris Christie wins a lopsided reelection victory this fall, it will put the New Jersey governor in position to seek the presidency in 2016. That’s the conventional wisdom, at least, and there’s plenty to be said for it. After all, by racking up a big margin in a deeply blue state, Christie would be making a powerful statement to Republicans across the country about his electability.

What’s not getting much attention is the flip side: the severe consequences that winning a second term as governor could have for Christie’s ability to raise money for a national campaign – and the possibility that he might be compelled to resign his office during his second term if he's going to seek the White House.

This is the result of two federal rules, one from the Municipal Securities Rulemaking Board dating back nearly two decades and the other from the SEC in 2011, that drastically curb the ability of employees of Wall Street firms to donate to governors seeking federal office and of the uniquely broad appointment powers that come with the New Jersey governorship. Put together, they have the potential to prevent Christie from raising millions of dollars from a cash-rich sector – the financial services industry – that has been particularly enthusiastic about him.

“It affects a huge swath of potential donations,” Ken Gross, a former lawyer for the Federal Election Commission who now runs the political law practice at the firm Skadden, Arps, said on Sunday. “Because it not only affects corporate donations where permissible at the state level to a governor or somebody, but also affects [corporations'] PACs and individual executives' personal giving down to very, very low limits – $250 or $350, depending on what you're talking about. So a tremendous impact.”

Enacted in 1994, the first of the MSRB rules bars employees of firms that underwrite state and municipal bonds from donating to any official seeking federal office who has any role in giving business to bond firms. That prohibition was expanded just over two years ago to include employees of firms that advise state pension funds – effectively doubling, from $2.7 trillion to more than $5 trillion, the market covered.

Penalties for firms found to be in violation of the rule are steep. For example, when a Morgan Stanley executive donated $1,000 to then-Massachusetts Governor William Weld’s 1996 U.S. Senate campaign, the firm was banned from doing business with the state for two years. The rule was triggered because Weld had the power to issue state bonds, and it cost Morgan Stanley millions in business.

More recently, the rules put a severe crimp in Texas Governor Rick Perry’s presidential campaign fundraising in 2012. As reported by Dan Balz in his forthcoming book, “Collision 2012” (a copy of which was obtained by a producer for my MSNBC show):

So far, Perry is the only sitting governor to seek national office after the investment adviser rule was enacted. But when Mitt Romney considered Christie for the No. 2 spot on the Republican ticket last year, the rules were apparently on his mind. Last August, after Romney tapped Paul Ryan instead of Christie, the New York Post reported that the talks with Christie broke down over the SEC issue:

Christie’s aides tried to find a way around the rules — like passing off power over state bonds and pensions to another official.

But that didn’t satisfy Romney officials. They feared that if Christie ran for veep and didn’t resign, the Obama campaign could challenge any Wall Street donations.

In his new book, Balz provides additional background on the Romney-Christie talks, reporting that Romney raised the issue directly with Christie and asked him if he’d be willing to resign his office in order to join the GOP ticket. Christie, according to Balz, laughed at the question, apparently not realizing at first that Romney was serious. As Balz tells it:

"A Romney adviser said the campaign never found an adequate solution to the pay-to-play rule as it might affect sitting governors running for president or vice president. They came away convinced that the rule will have a potentially significant effect on sitting governors who decide to seek the presidency in the future."

Christie, of course, isn’t the only sitting governor in the 2016 mix. But for several reasons the bond and investment adviser rules affect him more than any other would-be candidate:

It’s enough to raise the question of whether Christie, whose second term wouldn’t expire until January 2018, might decide that staying on as governor is more trouble than it’s worth if he opts to seek the presidency.

"He'd likely want to resign,” Stephen Spaulding, the general counsel for Common Cause, said on Sunday, “otherwise all these Wall Street financiers are not going to finance a campaign if they're going to lose business with New Jersey.”

If Christie were to resign as governor, he would be replaced by his little-known lieutenant governor, Kim Guadagno, who is running for reelection with him this year. There would be alternatives to resigning if Christie does run for president. He could, like Perry last year, essentially write off the idea of raking in big money from Wall Street. But given Wall Street’s particular affection for Christie, this would be a costly decision. Christie could also let a supportive super PAC collect the big Wall Street money he can’t and use it to run ads advancing his candidacy. But he wouldn’t be permitted to coordinate strategy with the super PAC.

On my MSNBC show on Sunday, we outlined Christie’s potential predicament and discussed it with Gross, Spaulding, New Jersey political writer Nick Acocella and former Massachusetts interim Senator Mo Cowan, who has first-hand experience with the SEC rules from his previous work as chief counsel to Massachusetts Governor Deval Patrick. Video from the segments is shown below. We also reached out to Christie’s campaign to ask whether he had conversations with the Romney team about the SEC rules last year, but we didn’t hear back.