Secrets of the right: Selling garbage to your fans

When conservative celebs peddle awful schwag, their fans pay big bucks. But here's why it's bad for the rest of us 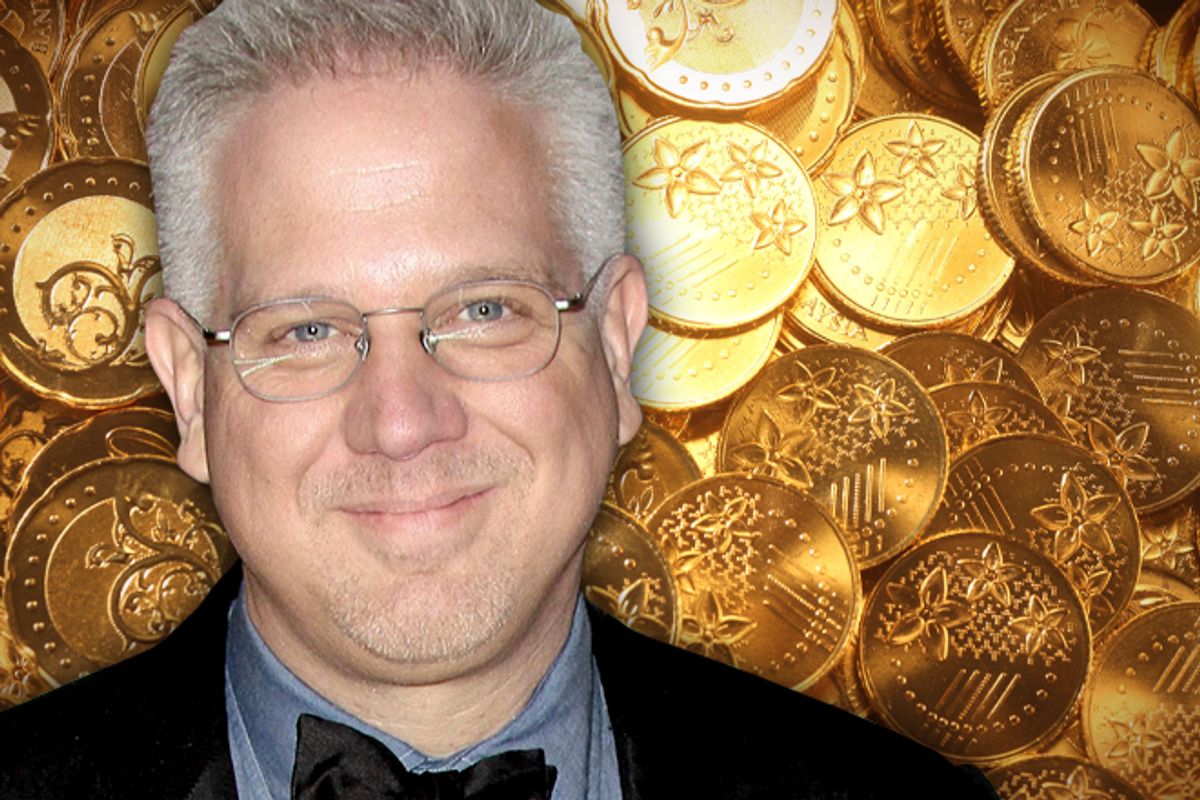 If the late social critic Eric Hoffer is correct in his often quoted (inaccurately, it turns out) adage that "every great cause begins as a movement, becomes a business, and eventually degenerates into a racket," then the conservative movement is well onto the third phase of that life cycle.

Last week, preeminent conservative blogger and Fox News contributor Erick Erickson was busted hawking a pricey but dubiously valuable financial advice newsletter to his readers in an ad that turned out to be lifted from a previous ad for the same newsletter sent in the name of Ann Coulter a few years earlier. "I'm happy to support a good friend. Didn't earn a penny," he tweeted. Whether you believe that or not may depend on whether you know that his publisher once offered to sell his endorsement, or if you believe, as Alex Pareene has often written, that the conservative movement is, among other things, an elaborate moneymaking venture by which the wealth of the rabid and gullible conservative rank and file is redistributed to already rich celebrities.

The truth is, peddling shady products to your most loyal listeners and readers is the rule, not the exception, and Erickson was just unfortunate enough to have someone notice him, and not the dozen other talkers or news outlets it could have easily been. From miracle health cures, to get-rich-quick schemes, to overpriced precious metals and seed banks, talk radio hosts and conservative news outlets are making a killing by trading their platform and credibility for the hard-earned cash of their unsuspecting listeners.

The most obvious example is gold, the precious metal conservative talkers encouraged their listeners to go all in on during the Great Recession (via the companies that pay them to say that and give them a cut of sales, naturally), but gold has since fallen more than 30 percent from its peak. If you bought when gold was near its high, you could have lost half your nest egg, and analysts say prices could fall another 50 percent. But poor financial advice aside, the real problem came in the particular companies the conservative luminaries ensured their listeners they could trust.

Glenn Beck is the most egregious, with his partnership with Goldline International, which also enjoys endorsements from Mark Levin and, until recently, Sean Hannity and others. Beck cut tearful promotional videos for the company, hawks them passionately on his radio and TV programs, and even designed a coin for the company this year (it reads "mind your business" on the front).

As it turns out, the company’s business model is built on systematically swindling its mostly elderly clientele by talking or tricking them into buying overpriced coins or just sending them different products than they bought, prosecutors in California alleged, leading the company to settle for $4.5 million in refunds to its customers. A judge instructed the company to foot the bill for a court-appointed monitor, who was supposed to ensure the company stopped its alleged "bait and switch" scam.

Not long after that, the company's former chief compliance officer came forward to say the company was back to its old tricks. “Goldline specifically targets vulnerable consumers with sales tactics designed to pressure those consumers into buying products that would often result in the consumer losing over one-third of his or her investment the instant the purchase is made," she said in a legal complaint filed late last year.

And yet, Beck's support is undiminished. The company's banner ad still graces the top of TheBlaze.com and Beck still touts them on air. “Before I started turning you on to Goldline, I wanted to look them in the eye. This is a top notch organization that’s been in business since 1960," Beck says in an endorsement on the company's website.

Midas Resources, Alex Jones' favorite gold company, sponsors his show and happens to own the Genesis Communications Network, which distributes Jones' broadcasts. And if you buy coins from Midas Resources, you get a free promotional subscription to The International Forecaster, a financial newsletter published by the late Bob Chapman, who happened to be a frequent guest on Jones' show (until he died last year), where he warned listeners about the inherent valuelessness of paper money and how they should purchase gold and silver -- from Midas Resources, naturally.

Alex Jones, in fact, has built a tremendously impressive multi-platform media empire that any 21st Century entrepreneur should both study and be envious of. And Jones, like everyone else in the business, gets a cut from almost all the snake oil he sells, on top of all the rest of his revenue streams, thanks to special links on his sites and newsletters that let sellers know where the click came from.

Midas has received complaints from angry consumers online that sound similar to the charges against Goldline.

And then there's the email list. Renting out the list of people who sign up to subscribe to your blog or radio show is a tried and true money maker. As David Bernstein explained in the Boston Phoenix, "Such lists of proven conservative contributors -- who skew heavily toward white, suburban retirees with disposable income -- are attractive not only to other conservative groups, but to companies selling financial services, health products, and other wares." Bernstein found data (from 2009) on the value to advertisers of individual conservative figures, which range from $85 per 1,000 recipients for an email sent under the name of Mike Huckabee or Pat Buchanan, all the way up to $125 for Newt Gingrich -- whose distributor, Townhall.com, is owned by the same parent company as Erickson's -- and $135 for Rush Limbaugh.

"There's...this vibrant marketplace that's been built up over the past 30 years, and it can be quite lucrative," Princeton University professor Julian Zelizer, who studies the conservative movement, told Bernstein.

And what does one sell once they've shelled out the money to tap into the network of Newt Gingrich's or Erick Erickson's most loyal fans? Rick Perlstein found out when he signed up for the email lists of "several influential magazines" and wrote about it for The Baffler. There was the "hidden money mountain" that could make you "an extra $6,000 every single month" -- "All you have to know is the insider’s code (which I’ll tell you)." And the "23-Cent Heart Miracle,” a miracle heart drug that “Washington, the medical industry, and drug companies REFUSE to tell you about.” There was even one asking for a $10,000 investment in a company started by "an Israeli entrepreneur, Zami Aberman, [who] has discovered ‘an oilfield in the placenta.'"

After that, he got another pitch from Human Events with the subject line: “The Trouble with Get-Rich-Quick Schemes.” Perlstein's hopes were quickly dashed when, inside, he found an offer for "INSTANT INTERNET INCOME." Perlstein reflected on this:

Back in our great-grandparents’ day, the peddlers of such miracle cures and get-rich-quick schemes were known as snake-oil salesmen. You don’t see stuff like this much in mainstream culture any more; it hardly seems possible such déclassé effronteries could get anywhere in a society with a high school completion rate of 90 percent. But tenders of a 23-Cent Heart Miracle seem to work just fine on the readers of the magazine where Ann Coulter began her journalistic ascent in the late nineties by pimping the notion that liberals are all gullible rubes.

Glancing at my own inbox, WorldNetDaily, the birther website that regularly lambasts the mainstream media for being too credulous of the White House's claims, delivers some exciting offers that strain credulity, then break it, kill it, and cremate it. A sampling of subject lines: "2 Minute 'Cleanse' Kills Toxic Parasites Living in Your Belly;" "FEMA Hates This... (#1 item to hoard)" -- spoiler alert, it's food; "Faraday Cages are in stock!"; "Diabetic Neuropathy Sufferers... your pain stops today!" And those are just from the past two weeks.

LifeLock, an identity theft prevention service, is one of Rush Limbaugh's most loyal advertisers and was one of the few that stuck with him after most fled following his attack on Georgetown Law student Sandra Fluke. In a previous life, the company was fined $12 million by the Federal Trade Commission for deceptive business practices.

And it's not just the big boys. Minor local radio hosts hawk shady financial schemes, scammy debt resolution services, and offers to increase the speed of your computer that are often actually malware. In 2011, the attorney general of Colorado settled a lawsuit with a radio host/get rich quick schemer who was advertising on Christian and conservative talk radio for $226,414. He had to promise that he won't advertise his products on air again.

Meanwhile, Rosie Gray at BuzzFeed has reported on a series of pay-for-play deals between conservative bloggers and foreign governments, the latest involving bloggers who "repeated talking points given to them by a proxy group for the Ukrainian government -- and at least one writer was paid by a representative of the Ukrainian group."

To be sure, this is not entirely new. The legendary Paul Harvey, who was recently resurrected to voice an instant-classic Super Bowl ad, was "perhaps the finest huckster ever to roam the airwaves," as Mike Thomas once wrote for Salon. NPR host Garrison Keillor fondly recalled a dinner over which Harvey pitched him on why Americans should "give large corporations the freedom to do good in the world," and still found time to "[sell] me a tin of liver pills and a utensil that dices, slices, chops, minces and prunes.”

But it has gotten worse, much worse, with the explosion of new media outlets on the Wild West of the Internet media, and the decline of elites who would view such naked self-promotion as déclassé.

It must also be said that this is not relegated strictly to conservatives -- talk radio breeds hucksterism. But conservatives, in addition to dominating talk radio, are left with a movement of dwindling size and increasing paranoia and disposable income. An ever-expanding slate of right-wing conferences like CPAC and Faith and Freedom, which offer a similar lineup of speakers every time, underscores a growing pay-for-access culture (see: Glenn Beck and National Review cruises).

Conservative rank and file seem willing to shell out cash to be closer to their stars, no matter what jankity product they happen to be hawking, and the stars are happy in turn to take their money. At some point, maybe they gave up a bit on advancing conservatism to focus instead on advancing themselves as they saw the writing on the wall of a movement circumscribed by demographic and societal change.

Last year, Bill Kristol, one of the last great conservative elites, recalled Hoffer's classic remark and lamented, "Reading about some conservative organizations and Republican campaigns these days, one is reminded of Eric Hoffer’s remark, 'Every great cause begins as a movement, becomes a business, and eventually degenerates into a racket.' It may be that major parts of American conservatism have become such a racket that a kind of refounding of the movement as a cause is necessary."

The premium for the racketeers is always on the crazy and hyperbolic, because that's what sells. "The problem," as Pareene insightfully noted, is that these hucksters "exert massive influence, and they only ever push the Republican Party to get more extreme...[so] you should still worry about the influence of the scammers." In other words: if you don't particularly care about conservative activists wasting their money, it may be time to start.