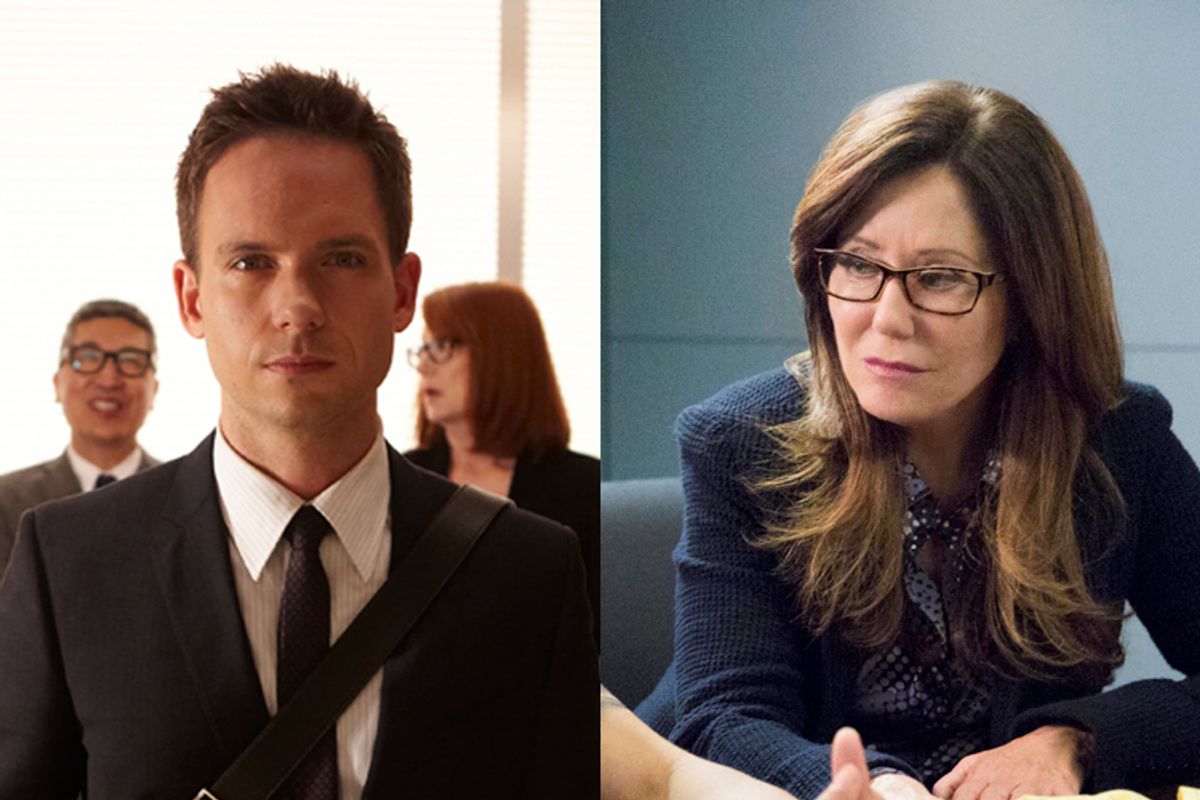 Welcome to “Cringe or Binge,” in which media critic Jennifer L. Pozner will guide you toward intriguing media… and save you from the rest.

Picture this pivotal scene from a legal dramedy’s pilot:

College dropout Maria Elena Cervantes, a perpetually stoned slacker, is in a mad dash to ditch the DEA agents chasing her through a ritzy hotel. Out of breath and slightly disheveled, she ducks into a suite where Harvard Law grads are applying for a coveted associate’s position at a top NYC law firm. She admits she’s only there to hide from the cops, but the bemused legal secretary sends her in to interview with Harvey Specter, the firm’s alpha douche, anyway. Just as she’s saying hello her briefcase opens, dropping thousands of dollars worth of weed at the interviewer’s feet.

Instead of escorting Maria Elena to the police, Harvey believes her explanation that she’s not really a drug dealer; this was a one-time drop because she needed $25,000 to keep her ailing grandma in a decent nursing home. He’s impressed: that girl’s got moxie! If only he could just hire her, NYC’s top closer muses; alas, his firm only recruits from Harvard. But, wait a sec: though she never went to law school, Maria Elena conveniently possesses a photographic memory and can recite every legal concept in any book she’s ever read. She’s even already passed the bar—just not in her own name, since her non-drug “job” involves getting paid to take high-stakes tests for dumb or lazy rich kids. A few minutes of smarty-pants one-upmanship later, Harvey dismisses all the magna cum laudes in the waiting room: he’s found his new associate! But practicing law without a license is illegal. Will Maria Elena’s fraud be uncovered? Will Harvey be disbarred for facilitating her deceit? Tune in.

Raise your hand if you think a mid-level network would take this pilot to series (note: exclude risk-taking premium channels like HBO or Showtime). Now, keep that hand up if you think average cable audiences would root for a woman-of-color protagonist who is a professional cheat, pothead and occasional drug dealer to succeed in a job for which she is abjectly unqualified?

I’m guessing not many hands are still waving.

Yet that was the plot of the pilot of "Suits" -- except with Certified White Dude Patrick J. Adams in the role of Maria Elena as described above. On the show, whose third season premiered last week on USA, Adams plays Mike Ross, the more compassionate mini-me to Gabriel Macht’s profane narcissist Harvey Specter. They banter with lines from classic movies, gleefully push legal boundaries, keep secrets from the Afro-Latina head of the firm, Jessica Pearson (the woefully underused Gina Torres) and argue about WINNING! so often I almost expect a thumbs-up from Charlie Sheen to pop onto the bottom of the screen.

In the aftermath of George Zimmerman’s acquittal, a national debate has emerged about the nature of white privilege: what it is, how it plays out, why it matters. In the extreme, that privilege allows white parents not to be consumed with worry that their children will be gunned down on the sidewalk for such daredevil acts as walking home with a pack of Skittles, as Trayvon Martin was. At the far more banal end of the spectrum, "Suits" offers a less dire but just as vivid manifestation of white privilege: the ability of white men to be perceived as fictional heroes no matter what, often for the very traits that would render female characters or those of color unlikable antagonists. The series’ premise can be read as an homage to the de facto affirmative action unqualified white men have always benefited from in the American workplace. Donna, the legal secretary played with quippy panache by Sarah Rafferty, granted sketchy/cute fugitive Mike his crucial interview because Harvey said he wanted to hire “another me.”

It requires little suspension of disbelief that Harvey would want to hire a smartass bro who reminds him of himself. One of the most common answers to “Why are top-tier executive suites/Congressional offices/media corporation boards so white and male?” is that white men in power hire guys who look like them, and whom they implicitly trust because of their shared racial and gender identity.

What inspires more head-scratching is how "Suits" has coasted to a third season with such hackneyed writing. The TV equivalent of a beach read, plot points hinge on unreasonable coincidences. In the pilot, Mike hadn’t met Harvey for more than 10 seconds when his briefcase spontaneously opens—no one even touches it—sending those bags of drugs tumbling out like lazy clichés. Comments such as Harvey’s “I’m not about caring. I’m about winning!” pass for character development. Donna is so unerringly devoted to her boss that she’s often asked if she’s in love with him; though competent and enjoyably witty, she’s ultimately two-dimensional. Nearly every character sputters “shit” and “asshole” with the frequency of cabbies (or, er, Brooklyn-born media critics… hi!) not because the writers know how to go profane with purpose, but simply because USA lets them. As the series progresses, dramatic tension with smart, career-stifled paralegal Rachel (Meghan Markle), Mike’s love interest, is regularly shorthanded via melancholy soundtracks backing up longing gazes at each other across the crowded office. When they finally get it on in the second season’s finale, it happens in the most formulaic way possible: Mike reveals his secret. Betrayed, Rachel slaps him in the face, twice. Before she lands her third blow he grabs her hand; she pulls away from his grip and starts to storm off, he grabs her arm, cue Meaningful Look and mood music, et voilà: urgent chicka-chicka-pow-wow up against boxes of legal briefs in the research room. Yawn. Moonlighting did it better, kids.

Perhaps most cringe-worthy is that "Suits"—one of the rare mainstream TV shows with a black female boss at the head of a workplace hierarchy—consistently subjugates Jessica’s power to Harvey, the underling she plucked from the mail room, mentored, put through Harvard, lucratively employs… yet who still delights in disobeying her at every turn. He is disloyal, disrespectful and deceptive in ways that could potentially destroy the firm’s credibility and ruin Jessica’s career—yet no matter how often she threatens to fire him, Jessica’s bark never has much bite. She treats him alternately like her number-one gun without whom she couldn’t professionally survive, and like a petulant child to be scolded without consequences. By the end of season three’s opener, Jessica had weathered numerous attacks on her leadership and orchestrated a strategic ass-saving merger…and Harvey had hatched a plot to destroy her. Gina Torres showed more electricity and controlled strength in any given episode of “Firefly” than she has been able to display in “Suits”' entire run to date; it’s a testament to her talent that Jessica comes off as dignified, graceful and powerful, rather than hamstrung and ineffective.

Putting a woman of color in a head honcho role as a foil for a seemingly more effective, more ambitious white male lead? Brogramming fail.

BINGE: "Major Crimes," TNT: A Procedural with a Heart

Most spinoffs are like celluloid versions of Tasti D-Lite: viewing you resort to when you crave but can’t have the real thing, and rarely particularly satisfying. For every watchable “Frasier,” there are several “Joey”-style train wrecks.

So I’ll admit I had low expectations for "Major Crimes," TNT’s revamp of "The Closer" minus the hit procedural crime drama’s star, Kyra Sedgwick. After all, it would be hard to replicate the magic of Sedgwick’s seven seasons of stellar performances as Brenda Leigh Johnson, the strong-willed LAPD Deputy Chief with a deceptively sweet Southern drawl, a compulsive relationship with Ding Dongs, and an uncanny ability to get any killer or rapist to implicate themselves (even if she had to massage their civil liberties to make it happen).

Happily, while "Major Crimes" may not be as finely-tuned as "The Closer"—and though Sedgwick is decidedly missed—this incarnation shares a lot of the elements that made the original so successful:

To soften Raydor’s all-business persona on "The Closer’"s last two seasons, "Major Crimes" makes her an unofficial foster parent to Rusty, a troubled teen former sex worker who lives with her while waiting to testify as the key witness to a brutal murder. In contrast to the prurient way sex worker characters are depicted in most procedurals, "Major Crimes" recognizes this boy’s humanity without erasing or pussyfooting around the truth of his traumatic past. Viewers get to know Rusty and the Captain alike as we watch her enroll him in the Catholic high school her children attended, set firm but caring boundaries, and slowly break through his angry defenses. Over the course of the first two seasons, Rusty’s distrust of Raydor morphs to grudging respect, appreciation, and—though he hasn’t admitted it yet—love.

He hasn’t admitted something else, too: during season two, Raydor becomes increasingly convinced Rusty is gay, and he either hasn’t allowed himself to realize it yet or he’s staying intentionally closeted. Refreshingly in a TV landscape that still traffics in homophobic stereotypes, she and the adults respond to this awareness without a moment’s hesitation or disdain, striving only to create a supportive environment in which he can peacefully embrace who he is.

Last week’s episode, featuring the murder of a transgender girl, was drawn with similar care. In a departure from the dismissive treatment of trans characters on most procedurals, Raydor and her team insisted on referring to the child with her preferred pronouns. The girl’s father respected his daughter’s right to self-define her gender identity and had planned to help her pay for hormone treatments; he argued bitterly with his wife whenever she referred to her “son” or dismissed “his choice” to “pretend” to be a girl. "Major Crimes" gave this trans child a dignity rarely allotted to crime show corpses.

This may not be Shakespeare, but for a procedural crime show "Major Crimes" has a lot going for it: humane storylines, compassionate characters, diverse performers and women who get the job done. With an average audience of seven million its first season, the series has become basic cable’s No. 1 new series of 2012. Five of the second season’s 21 episodes have yet to air—so go ahead, binge.

Jennifer L. Pozner is a media critic, public speaker, and the founder and Executive Director of Women In Media & News. She is the author of "Reality Bites Back: The Troubling Truth About Guilty Pleasure TV," and the host of web series Web series "Reality Rehab with Dr. Jenn."