Why has the Fox News host become the killer’s passionate defender? To use the case as a cudgel against Obama 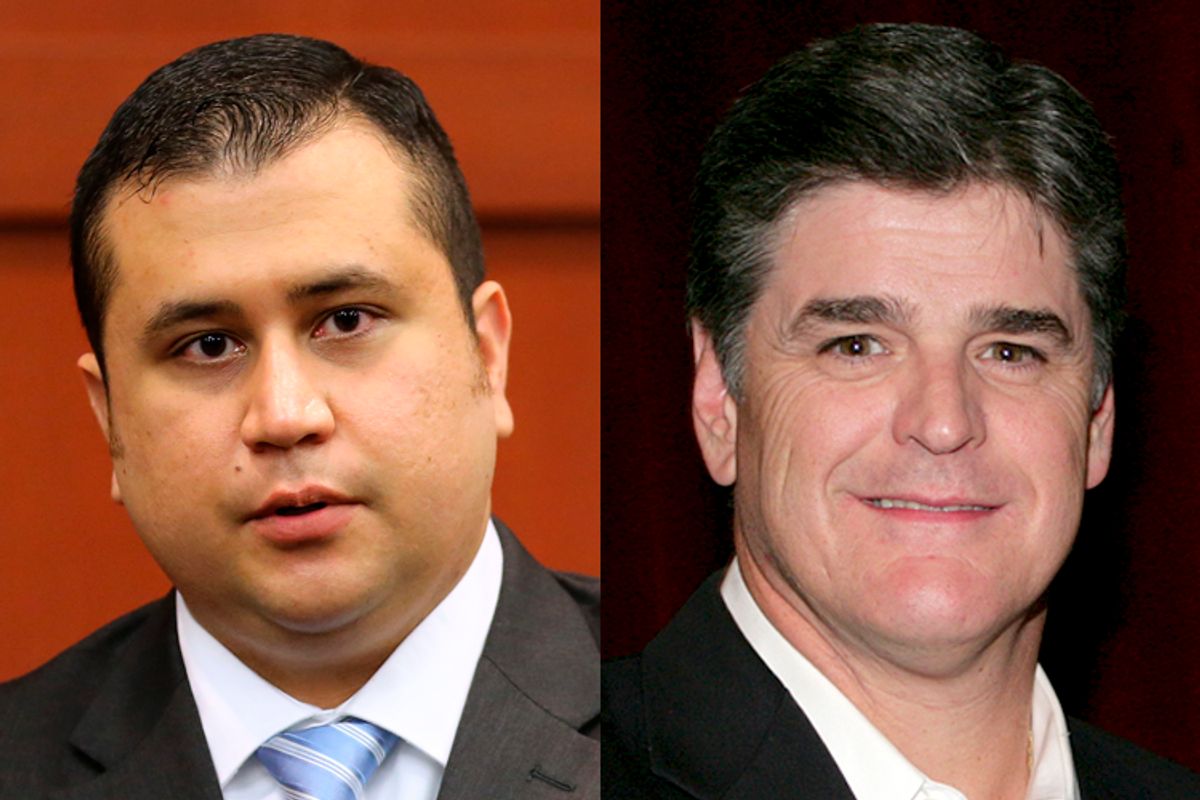 From a cable news perspective, the coverage of the George Zimmerman trial did not bring many surprises. Fox News, whose audience consists predominantly of older Americans living in the South and Midwest, tilted pro-Zimmerman -- while MSNBC, the number-one rated cable news channel among African Americans, leaned the other way.

One development that might not have been so predictable, though, was the emergence of Fox personality Sean Hannity as not just a Zimmerman supporter, but an obsessive one who would adopt the cause as his own. I worked in cable news for years, including at Fox News. Sean Hannity’s coverage in the past year has been more than shocking, and has gone beyond his typical conservative bluster. It’s been dangerous.

So, what’s the real reason behind Hannity’s impassioned defense of Zimmerman? I’d suggest he would have never covered the story as hard if not for one man, for one cause: taking down Barack Obama. Hannity's short-term mission is to rile up the base against Obama for the 2014 midterms, and with the last few months’ scandal-palooza dying down, using a tragedy as his new tool in the arsenal to paint Obama as the most divisive president in history is just what the showman ordered.

Hannity, whom I never directly interacted with during my years working at Fox News, scored the first cable interview with Zimmerman back in July of 2012. Seeming to sympathize with a man he felt had been railroaded by his arch nemesis, the “mainstream media,” the interview was actually just a 5 out of 10 on the Hannity softball interview scale. Zimmerman uttered at least three questionable remarks: the later disproven claim that he’d never heard of “Stand Your Ground” prior to the incident with Martin, a contradiction of his 911 call by telling Hannity that Martin was not running from him, and a new version of events regarding whether he was following Martin (saying he meant he was “going in the same direction as him”). Not surprisingly, Hannity didn’t press Zimmerman.

Of course, this wasn’t Hannity’s first ride on the race-baiting rodeo. There was his all-out campaign against then-candidate Obama’s relationship with his “America-hating” Reverend Jeremiah Wright. Then there was cooperation with former Fox conspirator-in-chief Glenn Beck in the ACORN takedown. There was the Shirley Sherrod debacle, where Hannity seized on a selectively edited video featuring a government employee’s tale of her initial reluctance to help a white farmer in need (Hannity ignored the pesky detail that the end of Sherrod’s speech revealed she ultimately decided to help the farmer). And of course, Sean led the charge against those menacing New Black Panthers.

But the Hannity obsession with the tragic incident that took the life of teenager Trayvon Martin has been different. This time, he has exploited a story about a murdered teenager. One of the most unsettling parts of Hannity’s year-long pro-bono work for the Zimmerman defense team is that the arguments he continues to regurgitate come not from DNA evidence, eyewitnesses or forensics, but a story: a tale a murder suspect told him on cable news about following a kid who looked up to “no good,” who “punched him first,” whose countless barrage of punches and head bashes left him within an inch of death.

In trying to understand Hannity’s obsession with defending Zimmerman, I spoke with someone who appeared on Hannity’s TV and radio programs throughout the case, Sirius XM radio host David Webb, an African American conservative. "Sean handled the legal proceedings of the Zimmerman trial responsibly, citing the tragedy of the death of Trayvon,” Webb told me. “The trial was about the interaction between Zimmerman and Martin, and we do not know outside the eyewitness testimony who saw Trayvon on top of Zimmerman, what happened."

I respect Webb’s view, but this story was always about much more than the actual legal proceedings, or who started or escalated the fight. It is about whether a country heralded by the right as a “beacon of freedom” is really that if 44 million of its citizens with darker skin don’t have the freedom to walk in the street at night wearing a hoodie without being considered up to no good.

Hannity’s coverage has given his television and radio audience a dangerous idea: that profiling "these f*ing punks" is acceptable, that following them is a role for average citizens, and shooting and killing them is simply a choice you have to make if you’re “punched first” and decide you're afraid for your life.

Sure, Hannity has made a career out of taking sides in news stories and injecting his agenda into them. But his dereliction in covering the Zimmerman-Martin story fairly is different; some stories are simply too important for simple “Hannitizing.” The killing of Trayvon Martin, and the guilt or innocence of George Zimmerman, is one of those. Hannity chose the usual left vs. right box to try to bludgeon the “divisive” President Obama, the evil NAACP, and Al Sharpton. But having a nightly TV camera or radio microphone hands you as much a responsibility as it does the opportunity to score points and make money.

In the aftermath of the Zimmerman acquittal, President Obama called for reflection. The person who might be best served heeding that call was likely not listening.