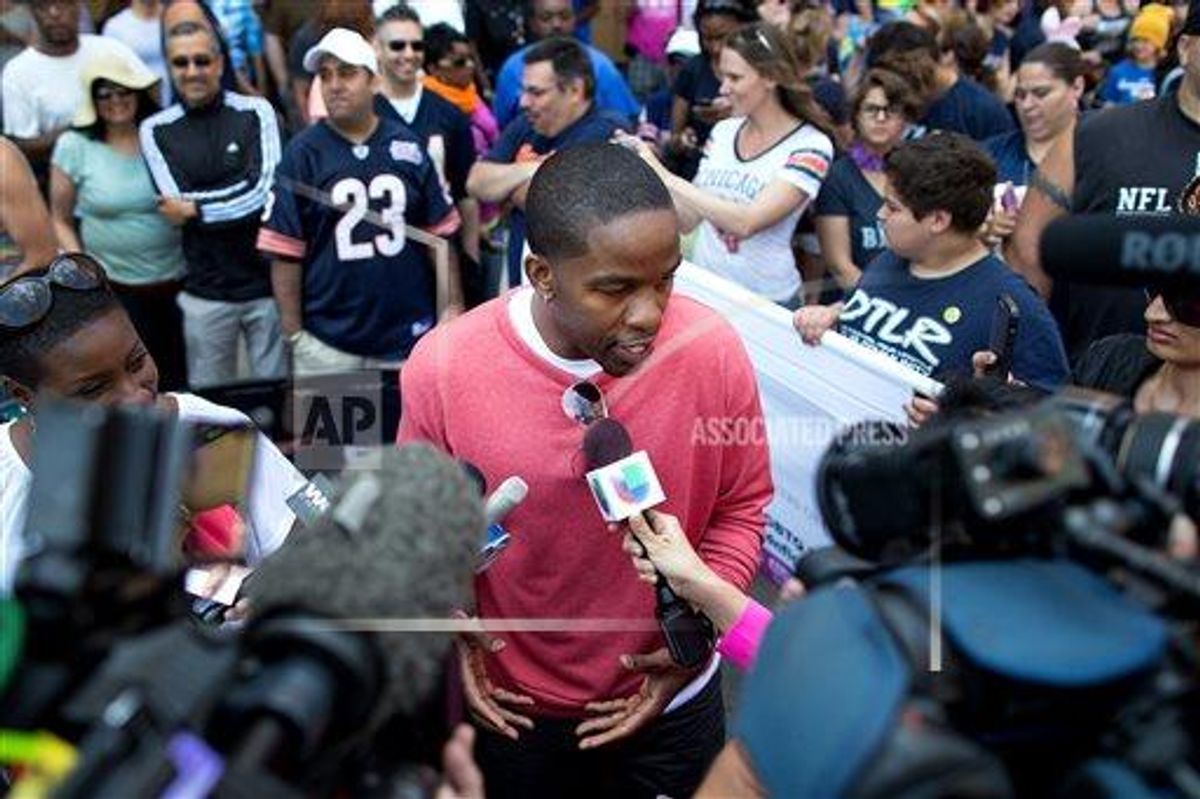 While there are currently no openly gay athletes active in the N.F.L., a handful of former players have come out since retiring from football. The MMBQ asked two of these men, Wade Davis and Esera Tuaolo, to write letters to their younger selves, "sharing what they experienced at various life stages and what they wished they had known along the way."

Reading their honest accounts of years spent struggling with self-hatred, depression and a paralyzing fear of being "found out" is pretty heartbreaking, but their advice to themselves (and, really, to others who find themselves in similar situations today) feels cathartic -- and plenty hopeful.

Here's Tuaolo writing to himself at 17:

The preacher at your Pentecostal church says the Bible condemns homosexuality. Ignore him. In that very same book, there’s an important passage. The Epistle of Paul to the Philippians tells you to “put no confidence in the flesh,” put your trust in God. He made you this way, and he doesn’t make mistakes. Religion will become both a comfort and a cover. You’ll date girls and tell them you’re saving it for marriage. You’ll feel bad, but it’s what you have to do to survive.

First of all, you’re gay. You can’t stop staring at that boy in 10th-grade gym class, and no amount of straight pornography is going to make you stop thinking about him. Dude, you’re focusing on the guy in the videos! Just face it: You’re gay. Now you’re trying to figure out how to hide it, because you’re not ready to come out—and that’s OK. Problem is, you think being a class clown somehow makes you more masculine. It doesn’t. You just look stupid.

You thought about killing yourself last year. You even forced open the window in your 15th-story apartment, ready to end the depression and the pain you’ve been treating with alcohol and painkillers. But you didn’t do it. You thought about your mother, alone in Hawaii, and the life you can give her with an NFL career. Green Bay didn’t work out, but there’s a lot of football left to play. You’ll land in Minnesota, Jacksonville, Atlanta and Carolina before it’s all over. Guess what: Minnesota is the place to come out. What an amazing player you’ll be, not having to wake up every day hoping nobody finds out. Wake up and free that six-year-old boy who shut himself in the closet.

You don’t know it yet, but this is the end. This is your last training camp in the NFL, with the Redskins in 2003, and you’ll never play in another game. You’re on the fringe of the roster, and while you’re supposed to be getting better with film study, you’re watching yourself and thinking, Wow, I run gay, or, I’m standing gay, or, Oh my God, I look like such a girl...

It all gets better from here. You’re afraid you’re going to have to stay in the closet your whole life, but you won’t. You’ll live in Harlem and have a partner for nearly a decade. You’re going to be able to do amazing work that affects youth and adults, straight and gay. For now, take a step back and enjoy the fact that you’re playing on the biggest stage on earth doing what you wanted to do. Enjoy that for a second, and enjoy everything else later.

You can read the rest of Tuaolo and Davis's moving letter -- and their advice to current N.F.L. players who may be closeted -- here.