We all live in the royal baby panopticon

In an age of ubiquitous surveillance and Facebook paparazzi, the new heir to the British throne is hardly special 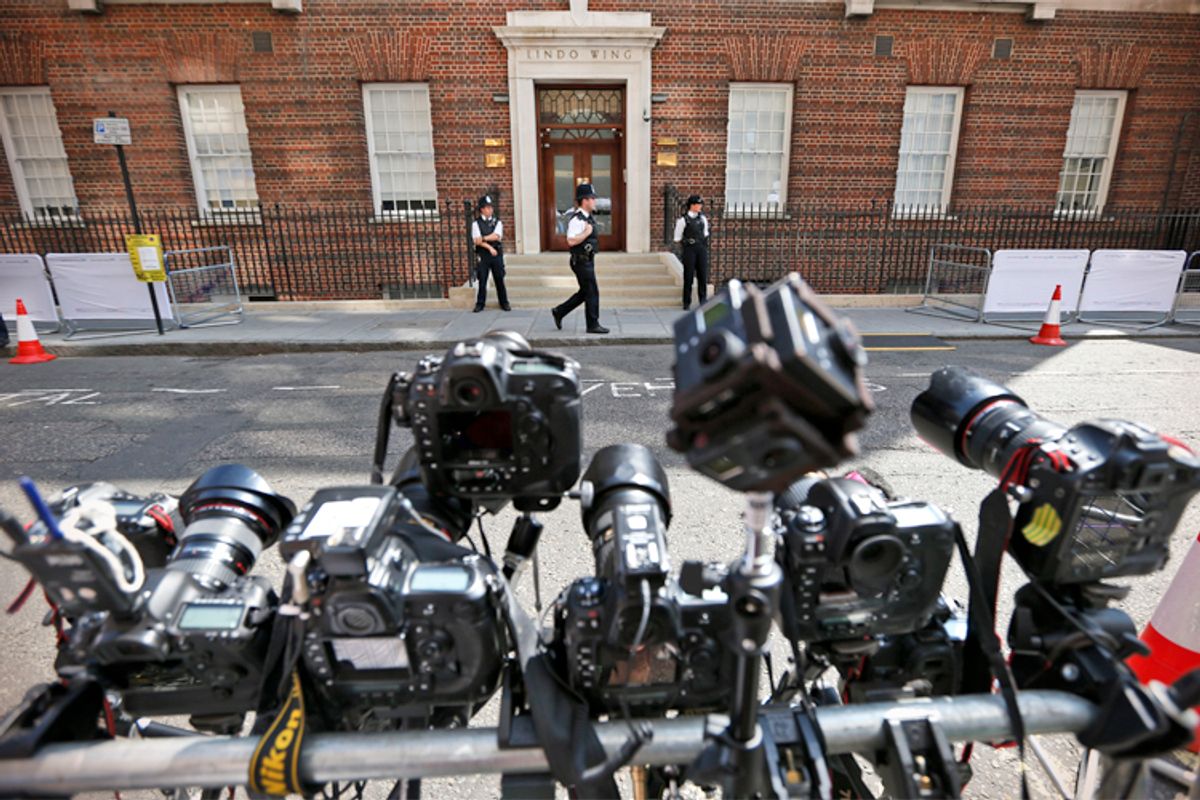 Even science fiction authors who believe that the British monarchy should be abolished are sharing their thoughts about the Royal Baby. Charles Stross suggests that the smartphone era will make this particular heir to the throne's life more insanely scrutinized than ever before.

This prince is going to find things a little different because he's going to be the first designated future British monarch to grow up in a hothouse panopticon, with ubiquitous surveillance and life-logging ...

I expect there to be Facebook account-hacking attacks on his friends, teachers, and associates -- and that's just in the near term. He's going to be the first royal in the line of succession to grow up with the internet... This kid is going to grow up surrounded by smartphones, smart glasses (think in terms of the ten-years-hence descendants of Google Glass), and everything he does in public can be expected to go viral despite the best efforts of the House of Windsor's spin doctors.

His uncle, Prince Harry, made some public gaffes -- going to a fancy dress party dressed as a Nazi in 2005 springs to mind -- but these were generally dismissed as youthful indiscretions: they happened in the age of the DSLR-toting journalist, when repro-quality cameras were still relatively uncommon on the city streets. Now phonecams are good enough that the Chicago Times has fired their photographers, issuing iPhones to their journalists: a move which is either very prescient or very foolish, but which shows which way things are going. Right now we're living through the Photography Singularity; 10 percent of all photos ever taken were taken in the past 12 months, and the exponential up-slope is continuing.

Charles Stross is an excellent writer, but in this case he's got his camera pointed in the wrong direction. First, as my colleague Rebecca Traister pointed out in an email, we're talking about a child whose grandmother was pursued to her death by a pack of paparazzi, one of whom took a picture of her while she was dying. Her last words: "leave me alone." It's hard to see how Facebook and phonecams are going to make this prince's life any more absurd than hers. Sure, the technologies of surveillance have grown in power and ubiquity, but the intensity of coverage of an heir to the British throne? Same as it ever was.

No, the more alarming significance of the "photographic singularity" and Google Glass panopticon is that we are all now living in a fishbowl that once only enveloped the high and mighty. Whether it's by our Facebook friends or the NSA or Google or closed circuit cameras, everyone is either being watched or can be watched. The panopticon has been democratized. Princess Di's last words are now a culture-wide plea. Don't track us. Don't target us. Don't spy on our email. Don't tag our embarrassing photos. Leave us alone.