New messages from the New York mayoral candidate could destroy him 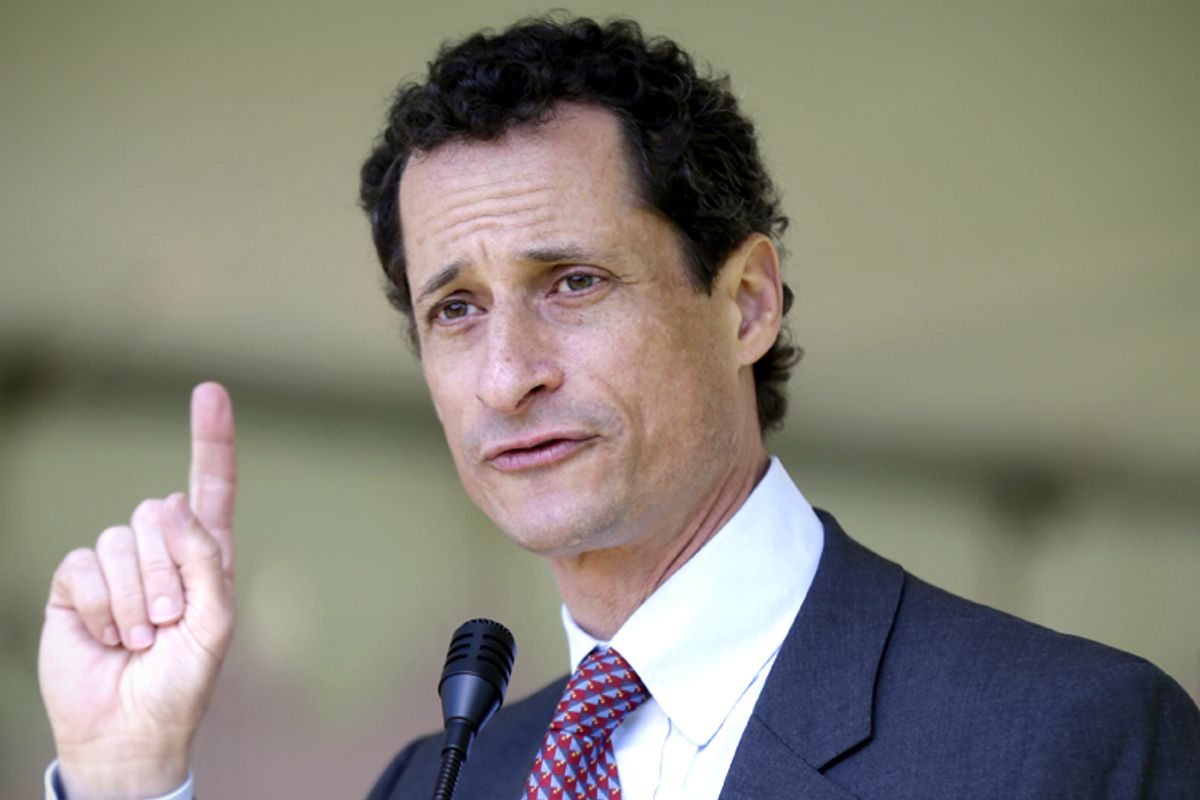 Former congressman and current New York mayoral candidate Anthony Weiner acknowledged this afternoon that newly discovered explicit messages sent under the pseudonym "Carlos Danger" were indeed sent by him. "I said that other texts and photos were likely to come out, and today they have," he said in a statement.

The new messages, revealed yesterday by the Arizona nightlife website TheDirty.com, are the first new ones to emerge since the 2011 "sexting" scandal that ended his previous career as a Democratic congressman from New York. The site's editor explained that Weiner and the anonymous recipient "had a relationship for 6 months and she believed they were in love." The two sent each other explicit images and spoke on the phone, with Weiner apparently sending the woman a photograph of his penis as "Carlos Danger."

"As I have said in the past, these things that I did were wrong and hurtful to my wife and caused us to go through challenges in our marriage that extended past my resignation from Congress," Weiner, who has been leading the polls to replace Mayor Michael Bloomberg, said. "While some things that have been posted today are true and some are not, there is no question that what I did was wrong. This behavior is behind me."

What he did not confirm is whether the messages were sent before or after the sexting scandal broke. The distinction is critical. If they were sent before, then the messages likely won't hurt Weiner much, as they're just newly unearthed artifacts from an era for which he has already repented and been forgiven. However, if his six-month relationship with the anonymous woman came after the scandal, Weiner's credibility, mayoral hopes and possibly even marriage could crumble overnight.

The woman, according to The Dirty, said they occurred after the scandal. "I think it’s important to reiterate the fact that all of this happened with him after his first scandal, so all of his campaign promises about being a changed man are absolute lies," the 22-year-old woman said.

The candidate's campaign has not responded to multiple requests from reporters about when the sexting occurred.

Weiner has successfully rehabilitated his image by, in part, assuring the world that his behavior was in the past and that he's learned his lesson and moved on. If that turns out to be a lie, he would no longer be seen as just a weird online philanderer, but a deceitful and untrustworthy one, who preyed on peoples' willingness to forgive. All the goodwill he's worked so hard to accrue would evaporate immediately. Fool me once... as the saying goes. It's hard to see how he could ever recover from that.

UPDATE: In a new post at The Dirty, the woman says she began her relationship with Weiner on July 12, 2012. That would place it just days before he and his wife sat for an interview with People magazine in which he said he was focused on his family. And just days after friends started talking up his potential political comeback to the press.