Do dolphins call each other by name?

Surprising research suggests the marine mammals may use unique, identifying whistles to communicate 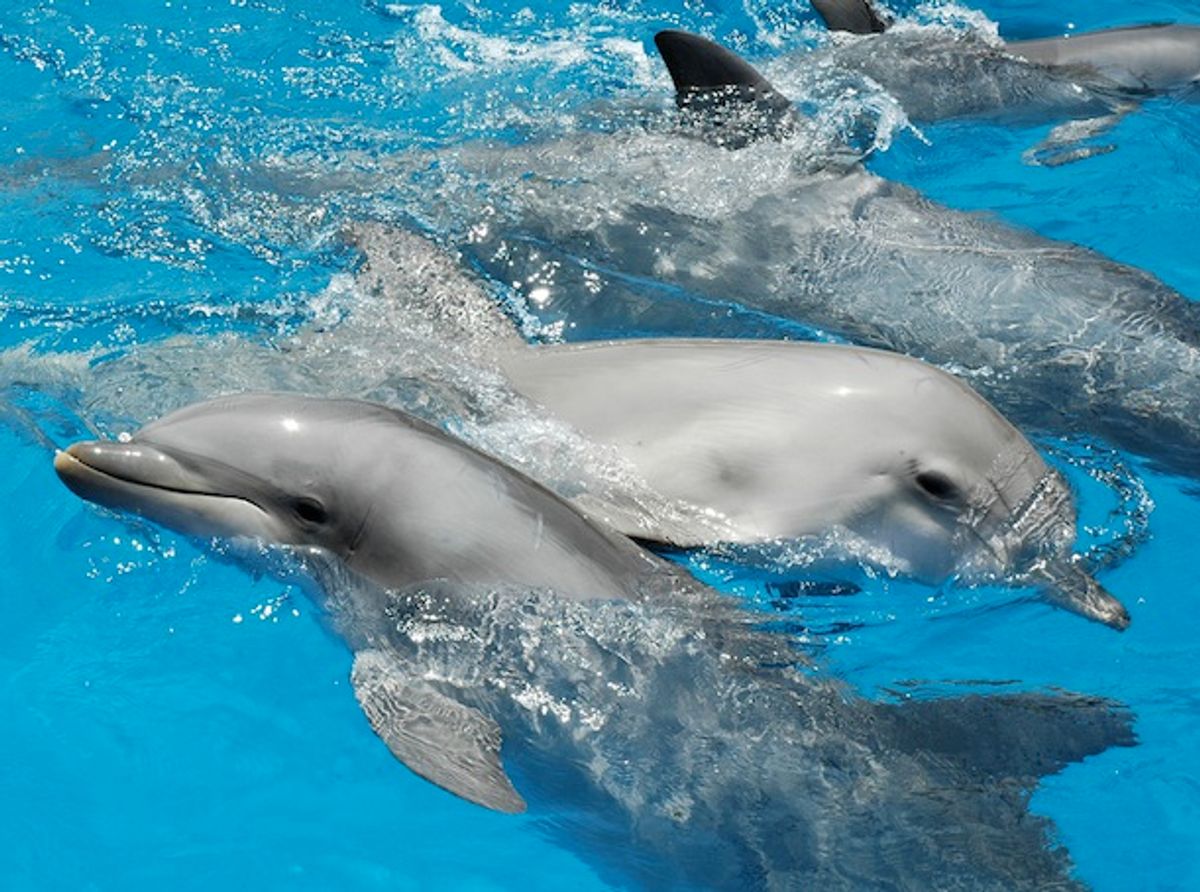 Researchers have long noticed that different dolphins each produce their own idiosyncratic whistles; as a result, some have speculated that these sounds might correlate to something like dolphin “names,” with each creature repeating its own name as it mingles with others.

In 2006, Stephanie King and Vincent Janik, a pair of biologists at the University of St. Andrews in Scotland, found that (pdf) dolphins were more likely to move towards an audio speaker emitting the whistle of a relative than a random, unrelated bottlenose, suggesting that the unique acoustic signature of the chirp conveyed some information about the dolphin that produces it.

Then, this past February, they published another study that gave further evidence to this idea, as they found that mothers were likely to copy their offspring’s distinctive whistle when they were temporarily separated during experiments. The paper provided the tantalizing suggestion that the mothers were “calling out” for their calves, much like humans would do if they were similarly separated.

Now, an article published today in the "Proceedings of the National Academy of Sciences" provides further evidence that these whistles are used to distinguish one dolphin from another, and that the dolphins identify themselves by the sound of their own chirp. In the study, the researchers found that when they recorded the signature whistles of wild bottlenoses and played them back to them, they responded by repeating the call. When the researchers played the chirps of other dolphins, the creatures stayed silent, or made unrelated, non-whistling noises.

King and Janik gathered data over the course of a decade by following wild bottlenose populations off the east coast of Scotland and recording the distinctive whistles. For each experimental trial, they used underwater speakers to play the dolphin groups one of three types of chirps: an exact copy of the one of the dolphins’ own whistles, the whistle of another dolphin in a nearby group that may have been familiar, or the whistle of an unfamiliar dolphin from a distant population. The dolphins’ responses (if any) within the next minute were recorded.

Later, when the team blindly interpreted the dolphins’ recorded responses—that is, listened to the speaker’s call and the dolphin’s response, without knowing if the speaker had initially played a familiar or unfamiliar whistle, and simply coded whether the two sounds matched—it turned out that the animals were far more likely to call back to the whistle with the same one if it was their recorded chirp in the first place.

For eight of the 12 trials using a member of the group’s signature whistle, at least one dolphin in the group responded back with it, compared with just two of the 22 trials using either the familiar or unfamiliar controls. Additionally, the bottlenoses were much more likely to swim towards the speaker when it was one of their group’s chirp played, further suggesting they were responding to a well-known stimulus.

Admittedly, there are several hurdles to be cleared before we can confidently say that the dolphins are responding to their own names by calling back. The most significant issue with this particular experiment is that the researchers had no way of knowing which dolphin in the group responded to the speaker in any given instance, so it could have been the dolphin whose whistle was just played, or another one. They attempt to account for this by comparing the data to background rates of whistle copying in dolphins and find that it’s unlikely other dolphins in the group are responsible, but it’s still a limitation.

Nevertheless, combined with their previous work on dolphin whistles, this work suggests that dolphins’ signature chirps have a clear individualized meaning when used in social settings. And though some scientists disagree, it’s tempting to speculate that when they played the whistles, the researchers were effectively calling these dolphins by name—and the dolphins were repeating it back to them, as if to say, “I’m right here.”

If this were true, it’d mean that these dolphins have a significantly different grasp of vocal signals to import meaning than any other non-human animals we know of. Birds, bats and elephants all use specific sounds to label particular items in their environment, but researchers believe these acoustic markers are static—they’re simply taught by a parent to an offspring and then repeated over time. If dolphins are assigning unique, arbitrary names to each individual, it suggests they’re more like us than we’ve ever considered.