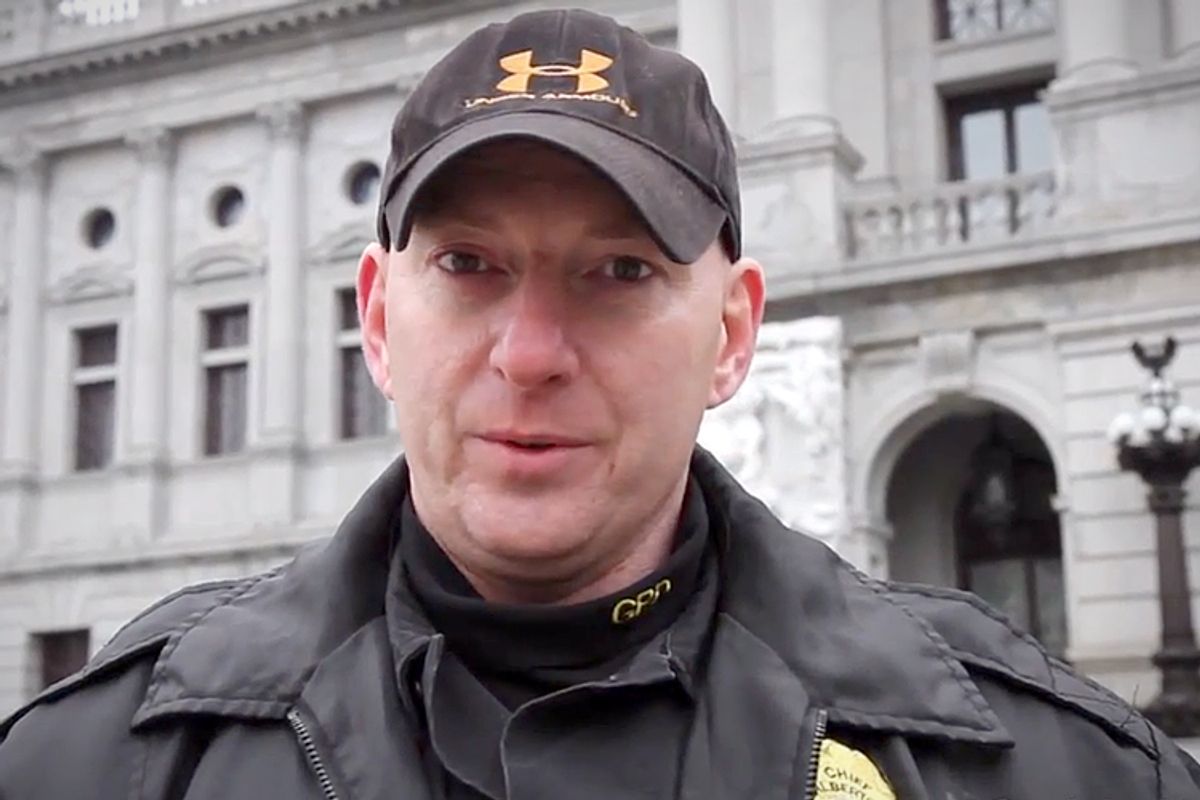 Mark Kessler really loves guns. "I carry an M-16 at work," he says. He can do that because he's a police officer -- in fact, the chief of police in the tiny borough of Gilberton, a hamlet of less than a thousand in the coal-rich hills of Eastern Pennsylvania. But even in a profession where carrying a gun is part of the job description, Kessler is an outlier. Last month, he told a story to a local Tea Party group about how he was stopped by police officers in a neighboring town for displaying his machine gun to a friend, even though he was in full dress uniform. And that, Kessler said, is the problem with law enforcement today in a nutshell.

"They want to kick butt and take names, and ruin lives, over nonsense. They terrorize people over a turn signal," he said, wearing an Oath Keepers t-shirt. "I've got better things to do with my time than worry about somebody who's got a broken taillight. Seriously, I really do."

Better things, for Kessler, include opening new chapters of the paramilitary militia group he founded, pushing legislation to fight the encroaching tyranny of the federal government, and making flamboyant YouTube videos that portray him "shoot[ing] a libtard out of a tree" or taunting the United Nations, but always shooting lots and lots of souped-up guns.

It was that last activity that caught the attention of the local press this week. "Coal region police chief posts profanity-laced video on YouTube," was the headline in the Allentown Morning call Tuesday. "Well, I guess I upset a few people the other day when I made a video," Kessler says in the video in question, referring to a previous video about the U.N. and John Kerry, which he has since deleted. "Well, I'm here to say I'm sorry. I didn't mean to upset anybody... So please accept this as my sincerest apology."

The police chief, who is also a member of the North Schuylkill school board, then disappears off screen for a moment and returns with what appears to be an AK-47 affixed with a drum magazine. "Yeah, I don't think so. This boy don't roll that way. For all you people out there who cried and cried about, 'Oh, I used profanity,' fuuuuucckkk you! Here's what I got to say, if you didn't get enough the first time around, go fuck yourself and get some more!" he says, before unloading the automatic weapon.

After the magazine is empty, he steps off screen to grab an M-16 rifle with a drum magazine. "Go fuck yourself again!" the police chief says before squeezing. Afterwards, he disappears and returns a third time, this time with a handgun, also loaded with a drum magazine. "All you fucking libtards out there, all you fucking crybabies, grow a pair of balls and man the fuck up. Alright? You're a fucking bunch of pussies," he says, before discharging the third weapon.

"What he does in his private life, we have no control of," Gilberton Mayor Mary Lou Hannon told Frank Andruscavage of the Pottsville Republican Herald when asked about the video.

In 2011, while off duty in a bar, Kessler intervened in a fight and drew his weapon. He shot himself in the hand. "We're not finding anything that leads to another gun being there," a state police commander said at the time. "We're finding there was one gun there and it was (Kessler's)."

Kessler seems to have some sway in town. In January, after the Sandy Hook school shooting led to a renewed push on gun control, Kessler successfully lobbied the borough council to adopt a resolution nullifying any federal or state laws that restricted firearm usage, "past, present or future." The measure, which passed unanimously, authorized Kessler as the town's police chief to take "any and all measures as may be necessary to prevent the unconstitutional enforcement of any federal, state or local acts, laws, orders, rules, or regulations in violation of the 2nd Amendment."

It's a job description also taken up by the Constitutional Security Force, an armed group Kessler started that prefers not to call itself a militia, though it supports such groups and has partnerships with some. "[WE WILL] DEFEND OUR CONSTITUTION OUR COUNTRY FROM TYRANNY ONLY IF NEEDED," the group's mission statement explains. "We are NOT advocating or promoting the overthrow of any government," nor are they "advocating violence," the website states. The bylaws specifically state you'll be banned from the group if you speak of or commit violence against the government "without just cause."

You must also "be willing to supply your own ammunition."

The January resolution has made Kessler a bit of national celebrity in certain circles, with appearances on broadcaster Alex Jones' TV show, and writeups in Before It's News and the New American, the magazine published by the John Birch Society.

He's caught the attention of the Oath Keepers (who say he is not a member, nor collaborating with them), a group of current and former military and law enforcement officers who have sworn to defend their interpretation of the Constitution. The chief also hosts a regular radio show. The Constitutional Security Force now has at least 38 different state chapters, according to the group, and is looking to expand.

All this success is scaring the powers that be, or at least his allies think so. In April, he told Before It's News, a hub of conspiracy theories and libertarian-leaning news, that he was getting death threats, which he said he believed were coming from the Schuylkill County Sheriff's Department, which was "very agitated" with his resolution. "I believe the sheriff has something to do with it, because the Sheriff has been trying to shut me down and shut me up. He is a gun grabber, he's not for the Constitution, he's anti-Constitution," Kessler said in a YouTube video. "I believe that's where it's coming from, I can't prove it yet." He's also reported seeing suspicious helicopters flying over his house and car, and that there was a military Stryker vehicle outside his police station to intimidate him.

"If necessary, there will be people coming from all over America to Gilberton to back up the chief," a masked blogger who goes by the name Arch Angel said while interviewing Kessler for Before It's News. "So if you think you're going to pull another Ruby Ridge, or another Wilco, or another 7/7, or another 9/11, you got another thing coming. Because there's going to be hundreds of not thousands of us there to back up the chief."