The women in sex scandals are rarely forgiven

While male politicians sail to second acts, women involved in their scandals are painted as evil or crazy 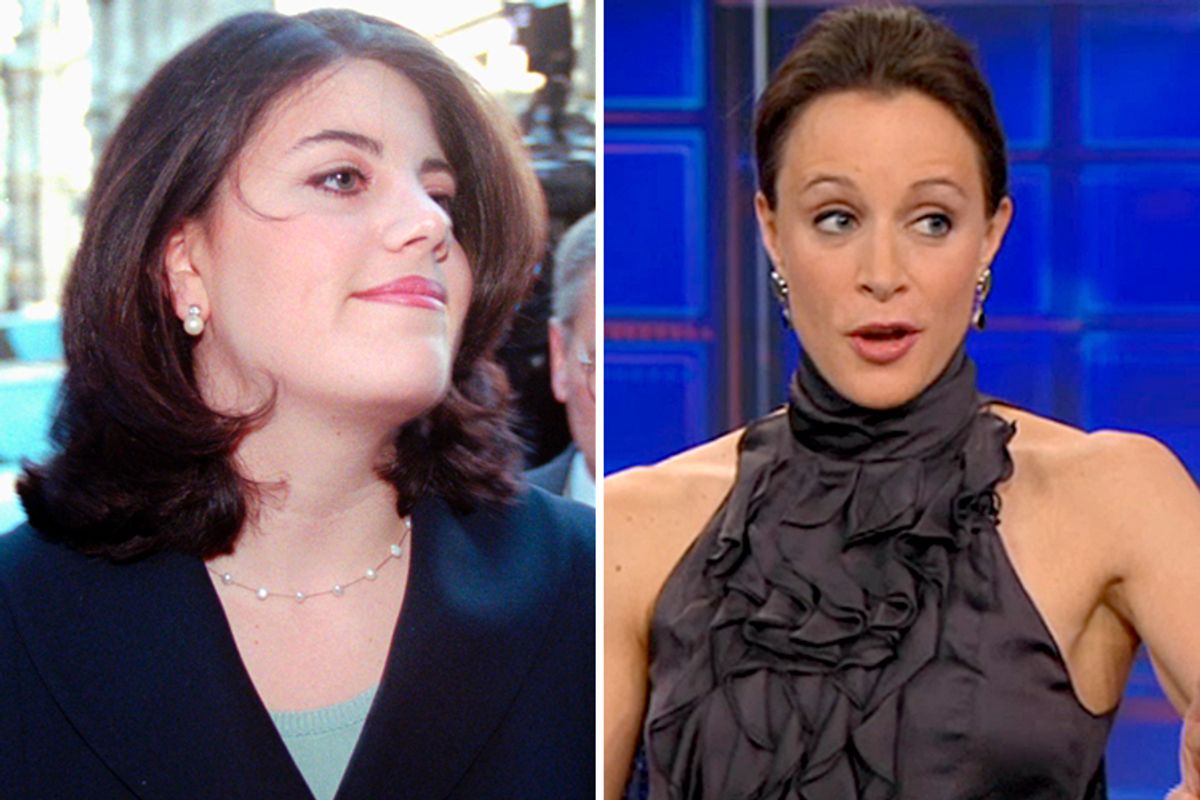 Anthony Weiner’s redemption seemed inevitable. He's just the latest in a long tradition of disgraced male politicians clawing their way back to respectability. Publicly disgraced in 2011 and forced to resign from Congress after sending “inappropriate” texts, Weiner was on the comeback, his mayoral bid meeting with more success than you’d expect.

Now there are new allegations. A woman has come forward claiming she and Weiner engaged in some dirty talk and exchanged sexy pictures even after he resigned from Congress. Weiner corresponded, at times, using the name Carlos Danger, a pseudonym that is almost charming in its absurdity. He is “very sorry.” He was also “very sorry” in 2011. Weiner is all apologies. The past is not quite the past, though like before, this so-called scandal is relatively tame.

In an emergency press conference on Tuesday, Weiner said, “I’m sure many of my opponents would like me to drop out of the race.” He plans on staying in the mayoral race — and why wouldn’t he? He had the hubris to run for office again in the first place. His wife, Huma Abedin, also spoke at the press conference, saying, “I love him. I have forgiven him.” She stood by his side the way so many political wives stand by their husbands in the wake of public humiliation, as is their right.

The sexts themselves are rather boring and not terribly sexy. What’s of greater concern is Weiner's lack of judgment when it comes to indulging his kink. He has no apparent understanding of how the Internet works. He seems to trust that he can reveal his secret sexual self to strangers who will keep his proclivities private. Is this naiveté, stupidity, arrogance, or a combination of all three? Is this the behavior of someone who should be in charge of anything?

But there is a more interesting narrative at play here — the one that allows disgraced politicians and other powerful figures to rise and rise again. Much as we are constantly on the search for heroes, applying that term to nearly anyone who does something above average, we are, as a culture, also deeply invested in redemption, in the idea that we will be forgiven in our own lives if we forgive those who fall from grace in spectacular public fashion. We know our lesser, flawed selves, intimately -- but self-confidence and, perhaps, some delusion allows us to identify with the powerful men in these scandals. We know the mistakes we make and we know that we are, most of us, one perilous mistake away from falling from whatever grace we may hold. We crave the redemption of public figures because if great men can be forgiven for their public trespasses, maybe, just maybe, we may be forgiven for our private ones.

The politicians who have had affairs are legion—Newt Gingrich, Mark Souder, Bob Livingston, John Ensign, Dan Burton, David Vitter, Gary Condit, and on and on the list goes. Hell, Thomas Jefferson, one of our most significant historical figures, had children with his mistress, Sally Hemings. Even women get in on the act. Idaho Republican Helen Chenoweth-Hage had a six-year affair with a rancher before she took office.

Former New York governor Eliot Spitzer fell from grace when he resigned a little more than a year into his term. He had several dalliances with women who worked for the Emperor’s Club VIP escort service. His wife, Silda Wall Spitzer, stood next to him, stone-faced, during the press conference where he made his mea culpa. His misdeeds were part of the inspiration for CBS’s popular series "The Good Wife." Despite his staggering hypocrisy, Spitzer is currently running for New York City comptroller. In his latest slick political ad, he says, “Look, I failed. Big time. I hurt a lot of people.” He failed, you see, but he deserves the chance to fail again.

Mark Sanford was run out of office as the governor of South Carolina in 2009, after, in June 2009, he disappeared for several days to Argentina, where he was visiting his mistress, María Belén Chapur. During his press conference, which is requisite in these affairs, his wife did not stand by his side. They were already in a trial separation and they divorced soon after. In May 2013, Sanford was elected to Congress. He is now engaged to María Belén Chapur, whom he calls his soul mate. He's apparently achieved both political and personal satisfaction.

CIA director David Petraeus resigned when his affair with Paula Broadwell, the co-author of his biography, came to light. There were “intimate” e-mails, and jealous threats to a third party and all the trappings of such an affair. There was the inevitable fall from grace. The FBI was even involved. Worry not. Petraeus has landed on his feet with professorships at City College of New York and the University of Southern California. He serves on several prestigious boards.

And then we have Bill Clinton, the former president of the United States. Accusations of infidelity long followed him, and the most significant scandal was his affair with White House intern Monica Lewinsky. He is still married to Hillary Rodham Clinton and regularly stumps for Democratic candidates. He has served on diplomatic missions. He spoke at the 2012 Democratic National Convention and is a regular on the lucrative lecture circuit. He remains one of the most revered political figures of our age.

What’s striking about these scandals is how common they are among powerful political figures. These stories are not so much salacious as they are sad, almost pathetic. They reveal just how desperately human even the most “respected” among us are. People have carnal desires and often they let those desires overcome their better judgment. They abandon all common sense or discretion.

A man loves a woman so much he disappears for a romantic getaway even though he’s a married governor? Another man enjoys uninspired dirty talk and exchanges “lewd” pictures with women online. More than anything, his behavior seems like a cry for attention. He keeps his indiscretions in the realm of the virtual, having his ego (or maybe his loneliness) stroked, not his body. These are the acts of men who let passion or hunger override rationality. Or are these the acts of men who believe they are so powerful they can get away with something so flagrant. And given how many of them are able to find redemption, aren’t they right? That is often the real question when these affairs come to light.

But what of the other women in these stories — not the wives who also have to bear the burdens of their husbands’ indiscretions and lazy lies, but the sex workers and mistresses and sext recipients? The other women don’t get to redeem themselves as lucratively as the powerful men with whom they are associated. In an article for New York magazine, Melissa Petro writes, “Men who abuse women and behave outside the sexual norm are the norm. Eventually, they’re allowed to slowly leave that rubber room, to recede back into their former existences, while us bad girls are branded for life.” What she says is largely true.

Monica Lewinsky has gotten by but she remains the butt of jokes. Ashley Dupré, one of the women Spitzer cheated with, remains a punch line and struggles to make ends meet. Her dreams of becoming famous are mocked while Spitzer’s ambitions are lauded at least enough for him to believe he has a shot at running for public office. Paula Broadwell has been painted as crazy and clingy while Petraeus -- well, he’s a powerful man.

Time and again, these other women, who certainly bear some responsibility for engaging in these affairs, have their lives torn apart without the opportunity to put those lives back together again. They continue to wear scarlet letters. Redemption, it would seem, is yet another privilege reserved for powerful men.