Teaching robots how to paint 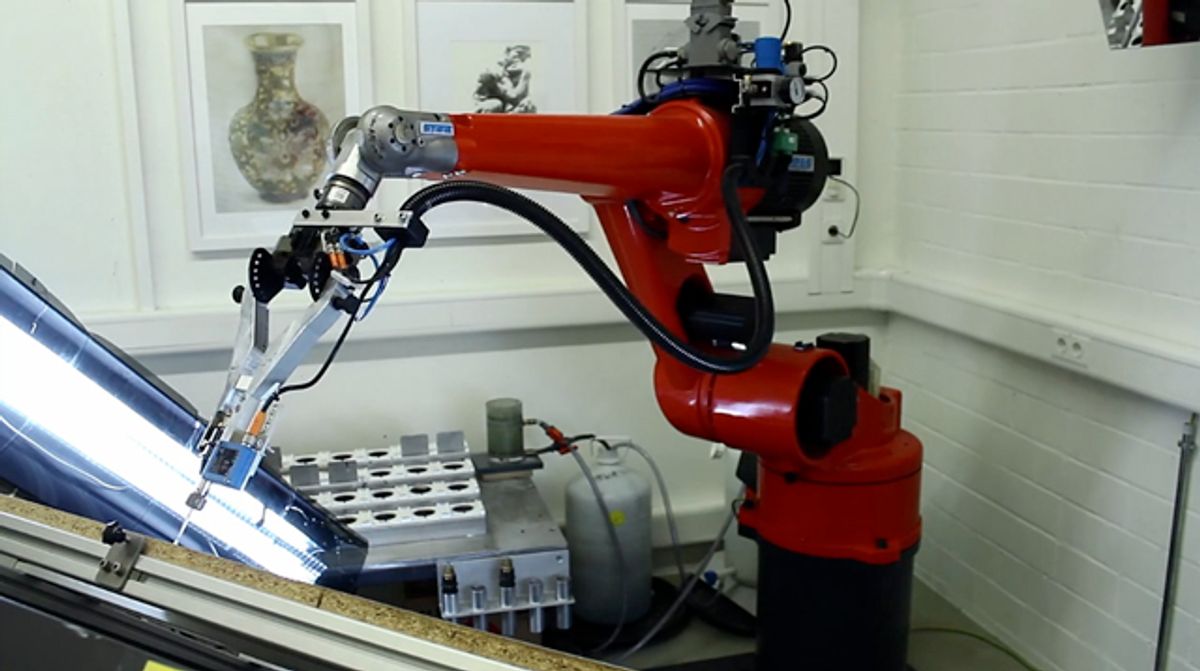 We’re fascinated with robots doing human things, from Elektro chain-smoking its way through the 1939 World’s Fair to the Turk automaton that was beating people at chess during the 18th and 19th centuries (there turned out to be a human hiding inside the latter, but still). Now a team at the University of Konstanz in Germany has trained a robot to paint.

Well, more like programmed, but their idea was to build a robot that doesn’t only create art, but through machine learning actually adapts to the painting process. For the project, called e-David (“Drawing Apparatus for Vivid Image Display”), the team took a welding robot that’s usually used in car manufacturing and altered it with sensors, a camera, and a computer — then put a paint brush in its metal claw.

Here’s the goal, according to the e-David team:

Our hypothesis is that painting – at least the technical part of painting – can be seen as optimization processes in which color is manually distributed on a canvas until the painter is able to recognize the content – regardless if it is a representational painting or not. Optimization happens intuitively during the drawing process and is highly dependent on the medium and its restrictions.

e-David doesn’t have a brain, but it can “look” at what it’s painting by taking a photograph after a brush stroke, and from that calculate what it will do next, and whether the painting should be made lighter or darker. With this “visual optimization” it then continues to delicately tap and finely drag the paint on the canvas, sometimes dipping the brush into cleaning water, until it’s complete, and then signs its signature backwards, which is a tad unsettling. It is a car robot after all, so the precision isn’t surprising, but the detailed results are pretty impressive for what is basically a giant metal arm that is just as capable as stabbing through the canvas with one lunge.

But of course, good art is more than just impressive execution. e-David could be more than just another robotic curiosity as an interesting tool for robot-human collaboration, without it turning into something cold and too technical. For example, Aurélien Bory’s Sans Objet at the Brooklyn Academy of Music last year had two men interacting with a massive industrial robot arm in a performance that was both beautiful and somewhat terrifying, with the machine very much a performer, but the human collaboration with it resulted in an interesting perspective on our interactions with intelligent machines more powerful than ourselves. The e-David team writes that the results of their project “might even influence our perception of what art is — besides the imitation of existing drawing styles (imagine what Seurat would have been thinking about a robot that helped him with the millions of dots) the machine might enable new techniques since labor plays no role any more.”

Here’s a glimpse of what e-David can do: