We used to care about killing people

Democrats once were anti-death penalty. Then Michael Dukakis's misfortune began a downward spiral toward immorality 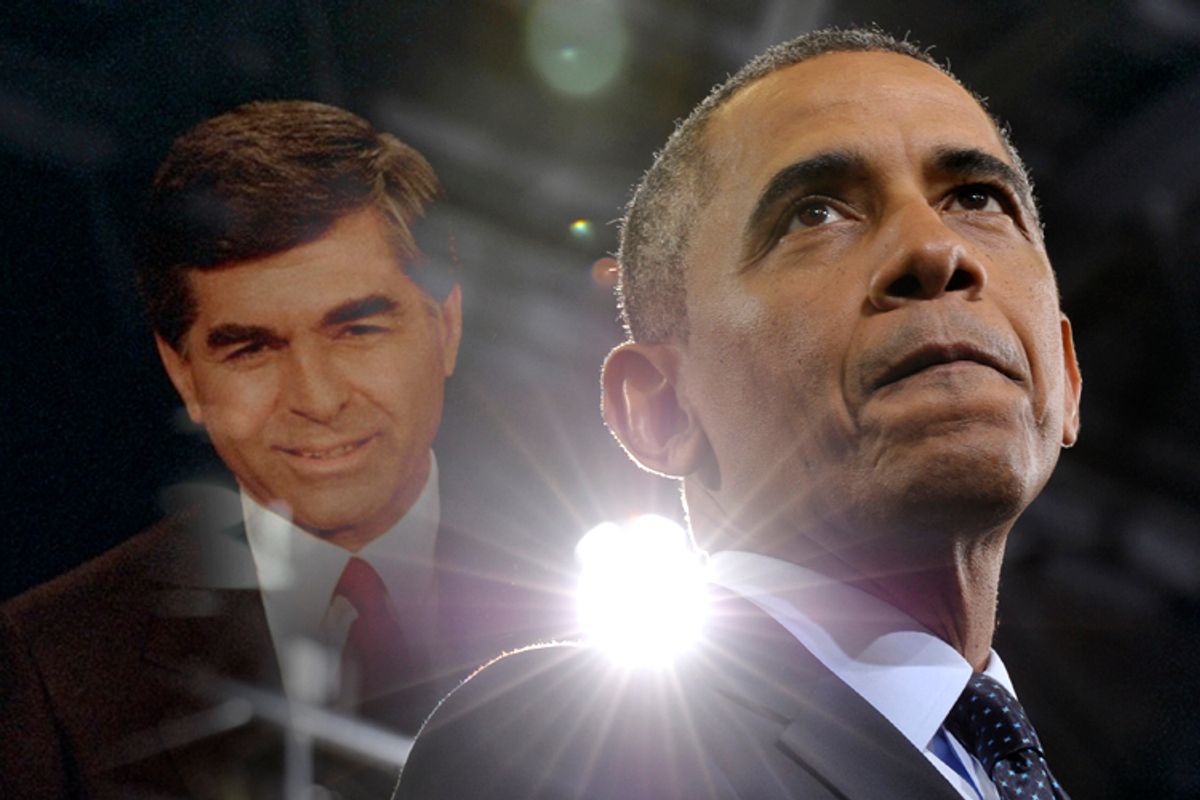 Warren Hill, one of more than 3,000 people on death row in America, was recently granted a stay of execution in Georgia after a judge rightly found the state’s new Lethal Injection Secrecy Law unconstitutional. As is now the norm in capital cases, much of the coverage of Hill’s potential execution has focused on the death penalty process – i.e., the drug used to lethally inject him -- but not on whether executing someone is inherently problematic.

However, there was a time when concerns about the inhumane nature of the death penalty played a more prominent role in the public debate. Back in 1972, the Democratic Party’s platform notably vowed to “abolish capital punishment,” depicting it as “an ineffective deterrent to crime, unequally applied and cruel and excessive.”

Now the nation’s two major parties tend to unquestioningly embrace the death penalty in principle. How did we get there?

Democrats live in the shadow of Michael Dukakis, who was asked an emotionally-charged question by a journalist during a 1988 presidential debate against George H.W. Bush. Would Dukakis hypothetically support executing a man who raped and murdered his wife? “No,” Dukakis calmly answered, “I think you know that I’ve opposed the death penalty during all of my life.” Dukakis’ response is credited by some with having helped cost him the election, as critics depicted his unwillingness to kill in vengeance as a character flaw. Never mind that Massachusetts, the state he governed, had a relatively low crime rate but no death penalty. Dukakis allegedly lacked the moral high ground for believing that society cannot show that killing is wrong by killing people.

Ambitious politicians took note. The number of executions in America surged in the 1990s with the encouragement or tacit support of most Democratic and Republican leaders. In 1992, when then-Arkansas Governor Bill Clinton was out of state campaigning for the presidency, he returned to Arkansas to signal support for his state’s execution of a seriously mentally impaired prisoner. Clinton later declared “no one can say I’m soft on crime.” The 1996 Democratic Party platform boasted about the enactment of new legislation making the death penalty applicable for more federal crimes — a stark contrast with the 1972 platform’s abolitionist stance.

George W. Bush likewise boosted his 2000 presidential campaign by underlining his satisfaction with the 152 executions that occurred during his tenure as governor of Texas. That Bush could have run as a “compassionate conservative” despite his death penalty record epitomized how the lives of executed prisoners are worthless in the eyes of much of the electorate.

The so-called “tough on crime” movement not only led to more executions but to draconian prison terms, including for minor non-violent offenders. As a result, America now has the world’s top incarceration rate. It is also the only Western democracy not to have abolished the death penalty even though executions do not make society safer. The murder rate in America is generally four or five times higher than in European countries. Within America, states that have abolished the death penalty have lower murder rates than states that retain it. While crime rates have been decreasing, it is doubtful that harsher sentences caused the drop.

Crime is no longer a major political issue but “tough on crime” demagogy still shapes the political debate. Fewer politicians campaign by stressing their support for merciless punishments, yet many oppose reform for fear of seeming “soft on crime.” Some politicians, like Barack Obama, do not talk much about crime but are prepared to pander when asked about it.

Obama declared that the death penalty “does little to deter crime” but that he supports it in cases “so heinous, so beyond the pale, that the community is justified in expressing the full measure of its outrage.” Such a rationale could justify executions in nearly all murder cases — any deliberate homicide is an understandable source of profound outrage. While Obama might prefer that capital punishment be applied in rare cases only, he criticized a Supreme Court decision striking a Louisiana statute making capital punishment applicable for the rape of a child, which would have expanded the range of death-eligible offenses beyond homicides.

Today, numerous self-identified liberals support the death penalty in principle, whereas reservations about executions were actually stronger a few generations ago. Besides the evolution of the Democratic Party, consider changes on the Supreme Court. Justices William Brennan and Thurgood Marshall, liberal champions of yesteryear, resolutely opposed capital punishment in all cases. No member of the Court’s current “liberal bloc” has taken a remotely similar stance.

The modern abolitionist movement largely reflects concerns about how the death penalty is administered — the wrongful conviction of innocents, racial discrimination and the greater financial cost of the death penalty next to life imprisonment, due to lengthier and more intricate legal proceedings. The movement has had some success at the state level. This year Maryland became the sixth state to abolish the death penalty since 2007. The last state abolition before then was in 1984.

Overall, eighteen states have abolished what Justice Harry Blackmun called “the machinery of death.” The number of annual executions has somewhat decreased but America remains among the countries that execute the most people worldwide — a distinction placing it in the company of authoritarian regimes like China, Iran, North Korea and Saudi Arabia.

If Warren Hill, an intellectually disabled man, is ultimately executed for murder, it will be because the courts deemed that Georgia’s Lethal Injection Secrecy Law raises no constitutional problems. It will also be because the cruelty of the death penalty is increasingly veiled by this means of execution. Methods of execution in America have evolved from the gallows, rifle squad, gas chamber and electric chair to lethal injection. Ronald Reagan tellingly likened lethal injection to putting away an animal.

“Being a former farmer and horse raiser, I know what it’s like to eliminate an injured horse by shooting him. Now you call the veterinarian and the vet gives it a shot and the horse goes to sleep — that’s it,” Reagan said, before adding that such “more humane methods” of killing should be explored in capital cases.

The recurrent search for “painless” and “civilized” methods of execution is not animated by empathy for prisoners. Rather, it reflects society’s efforts to assuage its own qualms about killing incapacitated persons, as Austin Sarat powerfully argued in his book "When the State Kills." Sanitizing the execution process by resorting to forcible euthanasia should not be mistaken for a show of compassion.