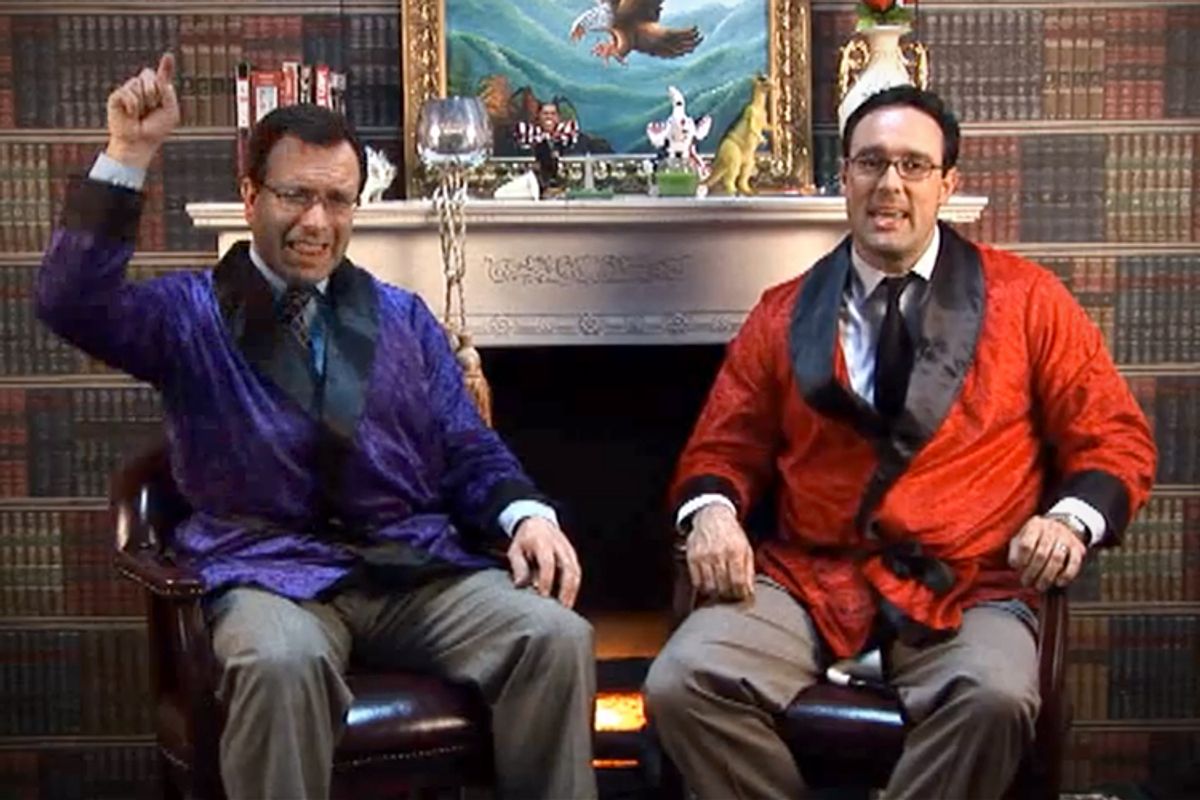 President Barack Obama delivered a speech on the state of the American economy yesterday. (Summary: It's not great if you don't own a bank). And the elite political press watched it and declared it boring, because the president had said many of these things before. (It didn't help that the president was not a baby king or a naked former congressman.)

Pundits and conservatives frequently say "he should be talking about jobs" whenever they want to criticize the president for doing something that seems frivolous, like going on vacation or appearing on a sports show. When the president talks about jobs they enjoy mocking him for it because they also recognize that the president has basically talked about jobs and the economy a lot. (And there are still no jobs.) To see exactly how this works, you could've read the Washington Post's extensive coverage of the president's speech yesterday. The straight news story, by Scott Wilson and Zachary Goldfarb, summarized the main points of the speech and put it in the context of Washington politics: The president has given this speech before, the top Republican in Congress responded to the speech with contempt, the president's approval ratings are low and he is beset by controversy.

E. J. Dionne -- a longtime liberal columnist who, unlike some of his colleagues, has not grown into a sort of incoherent reactionary -- praised the speech, and the White House's overall strategy, and pointed out that Obama won in 2012 by talking basically like this. Ezra Klein, liberal smartypants wunderkind who no longer identifies as "liberal," said the speech was short on policy but that it represented the White House's decision to tackle long-term economic problems rather than respond to an immediate crisis. Liberal Post blogger Greg Sargent described the speech as Obama's attempt to break "the austerity curse" in advance of budget negotiations with a still deficit-obsessed Congress.

All sensible takes of varying utility, if you wish to understand the political motivations of the White House and the broader meaning of their new public relations campaign and coming policy proposals. So let's turn to the objective political guys for the entirely substance-free bleating.

First, there is Dana Milbank, who does a sort of "funny" reported column about how dumb Congress is and things like that. Milbank says this was "roughly the 10th time the White House has made such a pivot to refocus on jobs and growth." (Seen it!) He says:

But even a reincarnated Steve Jobs would have trouble marketing this turkey: How can the president make news, and remake the agenda, by delivering the same message he gave in 2005? He’s even giving the speech from the same place, Galesburg, Ill.

Fun fact: Steve Jobs gave many of his big fancy presentations at the same annual events, often held in the same places they were held the year prior.

Yes, but this also risks sending the signal that, just six months into his second term, Obama is fresh out of ideas. There’s little hope of getting Congress to act on major initiatives and little appetite in the White House to fight for bold new legislation that is likely to fail. And so the president, it seems, is going into reruns.

In the rest of the column, Milbank concedes that the president is probably right to be talking about these things still, but Republicans won't let him do anything, and because of that fact, the president should come up with "bold" "fresh" "new" ideas, because new ideas are magical and can break down entrenched political opposition.

If he’s to break through the resistance, Obama will need some bold new proposals. That’s why his speech returning to the oldies would seem to confirm that the White House has given up on big achievements.

I dunno, the only bold new proposal I can think of that will meaningfully break down Republican resistance would be to massively expand the size of the House and institute nationwide nonpartisan redistricting, and somehow do this before the 2014 elections, and then get rid of the filibuster? That would be pretty bold.

"But it would be easier to rally enthusiasm if he gave supporters something big, bold and new to reach for," Milbank says. And: "Obama needs to help his supporters help him — by giving them the power of fresh ideas."

What should these ideas actually... be? I dunno, leave that to the eggheads! Stop pussyfooting around with this warmed-over "making higher education more affordable and investing in the future" garbage and give Dana Milbank something new! National Opposite Day! High-speed zeppelins! An annual 12-hour period in which all crime is legal!

And finally there is Chris Cillizza, the Post's main nonpartisan political blogger, and Dana Milbank's former partner in hilarious viral video content about how Hillary Clinton is horrible because she is a woman and  a man who has already written one of the worst political columns of this year. Chris Cillizza's review of President Obama's speech: Basically the same as Dana Milbank's. (Does the Post really need to pay both of them?) "You could be forgiven if you thought you had heard President Obama’s speech on the economy today before. Because you have. For most of the 2012 campaign." Rerun! Seen it!

And, it seems incredibly unlikely that this speech, which Obama gave some version of for virtually the entirety of his 2012 campaign, will change any GOP minds. (Remember that President Obama won with 332 electoral votes in an election that was, at least in part, a referendum on his handling of the economy.)

Well at least Cillizza acknowledges that President Obama did win an election thanks in part to the sorts of things he was saying in this speech. Alas, Cillizza says that the speech will not change anything, because of "gridlock" and because Republicans thought it was a bad speech.

I want to highlight one particular passage:

That’s a nice rhetorical flourish and there are, without doubt, some things that Obama can make happen in regards the economy via executive order. But, to make any major progress — a grand bargain on debt and spending for example — President Obama needs Congress, including the House that remained in GOP hands in 2012 despite his stronger-than-expected victory on the same day.

Wait, wait, let's go back to Milbank for a second:

But while that message remains relevant, Obama is now facing a Republican opposition that, by House Speaker John Boehner’s own account, is measuring its success by how many laws it can undo. There’s no longer serious talk about a grand bargain that could reform entitlement programs and the tax code.

Oh my god guys. Where is the serious talk about a grand bargain to reform entitlements??? I mean besides on The Washington Post editorial page, every single goddamn day. We need bold, fresh new ideas for this jobs crisis, says professional political columnist Dana Milbank, like cutting Social Security. I'm shocked that both of these guys made it through their pieces without bringing up Simpson-Bowles.

So this is part of the reason why "pivoting" to the economy is apparently a tremendous waste of time: Not just because of Republican policy nihilism, but also because no matter how much you hold a Beltway political pundit's hand and slowly and carefully explain America's economic problems and what ought to be done to alleviate those problems, a Beltway political pundit will hear "the economy is bad" and he will instinctively respond "oh we'd better get a grand bargain, to fix the deficit."