For my next move in a career dictated by serendipity, I'm following the pen to TV, to co-host the "The Stream" 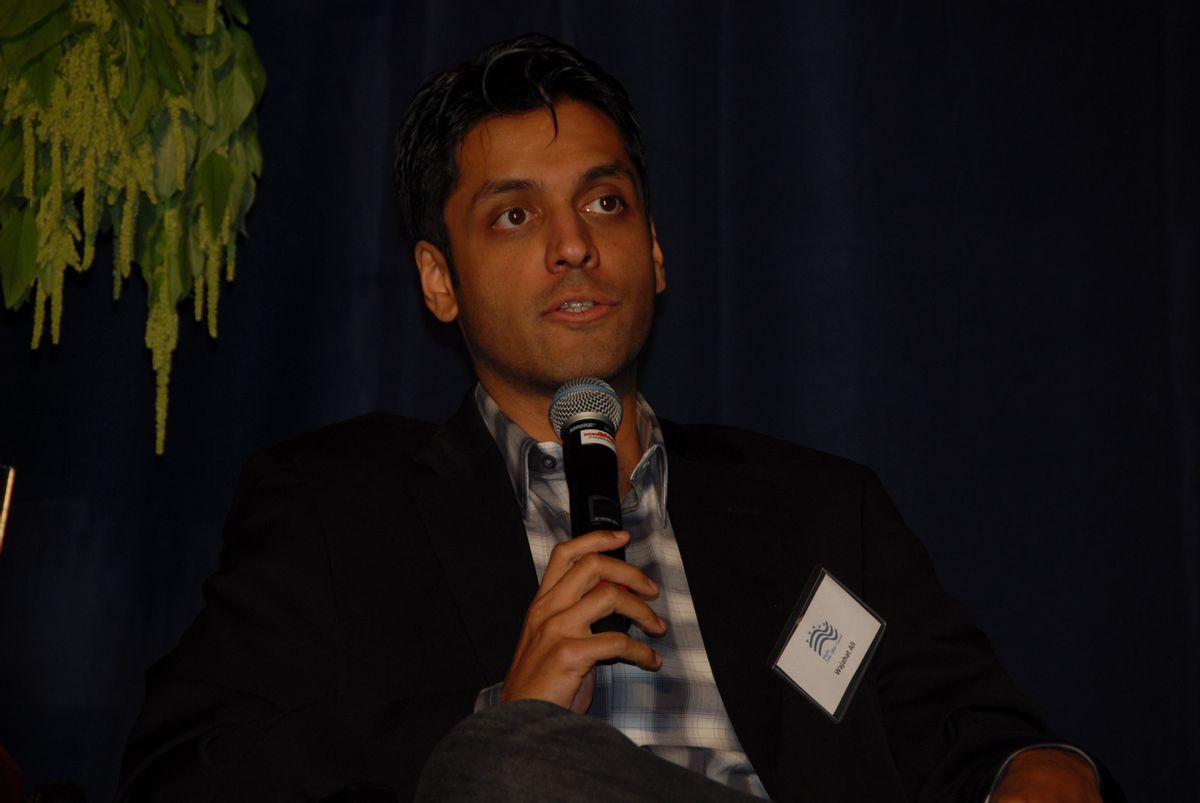 Wajahat Ali speaking at a workshop on "The Industry of Hate in the Public Square," hosted by the Muslim Public Affairs Council in 2011 (Flickr/MPAC National)
--

I’m still trying to figure out what I want to be when I grow up.

As a 32-year-old male, this should inspire a premature midlife crisis, generate mockery by my peers, and ensure several dateless nights (thankfully, I’m married).

All I know is that I wanted to tell stories ever since I was a 10-year-old, overweight, left-handed kid with turmeric and lentil stains on my OshKosh B’gosh shirt.

I want to share stories that are “By us, For Everyone” -- narratives that illuminate relevant issues and communities, ones that are often marginalized, neglected or simply forgotten -- for a diverse audience across America and overseas. I want to entertain but also edify, and at the risk of idealistic pretention, perhaps even bridge the divides.

Over the past few years, I’ve been privileged to subsidize my existence doing just that -- through essays, commentary pieces, a play, short stories, screenplays, speeches and an investigative report.

My career has been accidental, fortuitous and labyrinthine. I was forced to write my first play about a Pakistani American Muslim family in order to pass my UC Berkeley English class. After graduating law school, I was unemployed for eight months and began blogging, writing commentary pieces and doing journalistic interviews  to avoid going nuts sitting at home slowly transforming into Jack Nicholson from "The Shining."

Thankfully, the angel of serendipity smiled upon me, one opportunity led to another, closed doors started opening, and since then I’ve been able to ride my pen and travel around the world – mostly in economy with broken, crappy headphones and ornery passengers.

The pen has now taken me to my current accidental stop: the new co-host of Al Jazeera America’s "The Stream."

But let’s rewind for a moment.

Earlier this year, I moved from glorious Bay Area, California to Virginia to be with my new wife -- the better half. (Quick marriage Yoda wisdom for all: “Happy Wife, Happy Life. Unhappy Wife, Messed Up Life. Lesson? Keep Wife Happy.”)

A few weeks after arriving, I received a call from the producers of the award-winning Al Jazeera English show "The Stream," a fast-paced, groundbreaking, topical news show that uses social media to integrate a global online community with the hosts and guests to discuss the day’s subject and provide a variety of fresh perspectives.

We met at Caribou Coffee where we broke cinnamon bread, tolerated the terrible injustice known as chai latte, and commiserated about my future career plans, which at the time consisted of creating an impressive Netflix queue.

For some context, about two years ago I was a guest on Al Jazeera English’s "The Stream," which was then hosted by the superstar duo of Derrick Ashong and Ahmed Shihab-Eldin out of the Newseum in Washington, D.C. The vibe was loose, fast and energetic. I sat on a gaudy, colorful, orange couch and fielded intelligent questions from the hosts and online community. The conversation was engaging, thoughtful and did not devolve into simplistic sound bites and meme-riffic talking points spewed by slick talking heads or establishment pundits.

I was impressed and continued watching the show as it handed the hosting reigns to Imran Garda and recently to the fantastic, lively duo of Femi Oke and Malika Bilal, who will continue hosting the Al Jazeera English version of "The Stream."

The show’s producers said they’d been following my career and appreciated how I used social media to engage diverse communities and also create content. Al Jazeera was branching out to American markets with a brand new network entitled Al Aljazeera America and they were planning on launching the American version of "The Stream."

The chai was horrible, but the meeting went well. Later, they invited me for a try-out, which consisted of wearing makeup and doing an entire mock episode with the show’s host, Lisa Fletcher, an award-winning investigative journalist whose professionalism and skill is matched by her friendliness and remarkable ability to tolerate all my awesome mistakes with a Zen, vegan calm. We both got along, the producers liked what they saw, and they sent the audition video up to the executives.

I met with the executives in New York for my final interview. At first, they kept asking me about animation and computer programming. I was a bit confused but went along with it. After ten minutes, they asked:

“Wait, are you Wajahat Ali? From India? Here for the animation job? Is this your Yahoo mail?” They handed me the resume of my Indian doppelganger.

“I’m Wajahat Ali from Fremont, California. But, I could be here for animation if you want. And, no, I don’t use Yahoo mail,” I replied.

Thankfully, the confusion was resolved, an offer was made, and I accepted.

I’m used to joining things that begin from the ground up – it’s often chaotic, messy, experimental, but also allows opportunities to break the mold, mix it up, throw risky ideas on the wall, see what sticks and thus discover and play in exciting, new playgrounds. Al Jazeera America is a bold venture building upon an existing brand name’s impressive history of delivering facts-driven, content-focused, passionate, thorough coverage of often under-represented issues, communities and regions – such as Latin America, Africa and the Middle East.

I’ve been promised that these principles and traits which have made Al Jazeera a respected global leader in news will be guiding the Al Jazeera America channel as well.

Like most Americans, I’m tired of complex narratives and storylines being reduced to tokenism, sensationalism, fluff pieces and shameless political pandering. I’m also tired of Americans outside establishment circles not having a seat at the pow-wow.

At "The Stream," each viewer has the mic through social media and is invited to join our conversation.

This is the power of new media, a language spoken by a new generation. All of us are becoming multilingual.

We no longer just talk. We email. We text. We video chat, g-chat, yahoo-chat, instant message, Google hangout, Skype, tweet, re-tweet, post, re-post, blog, tumble, YouTube, Hulu, upload, download, Facebook update, E-vite, E-greet, E-meet, and it all repeats.  And some of us even Poke (a few more than others).

At "The Stream," we embrace the power and hope of new media as the great equalizer leading to the democratization of news, more effective engagement with national and global communities, and a tool that empowers viewers in helping write, rewrite, frame and reframe the evolving narratives.

As an example, we launched our first #Open Editorial meeting with our global community using Twitter, Facebook, You Tube, and Google Hangout for story ideas and pitches. I’m proud to say we’ve already incorporated many of those ideas for our upcoming shows.

We might be relying on you soon to help us decide the Twitter hashtag for our daily show. Right now it’s #AJstreamAM but that’s a mouthful (seriously, try saying that fast seven times in a row. If you succeed, tweet about it and then buy yourself a cookie.)

Here are some potential options: #Streamers, #Streamin, #AJAMstream, and #ExStreamists (I’m kidding about the last one, or am I?).

Tweet us your thoughts @AJstreamAM. See how it works? Awesome.

Now to answer some lingering questions

Are you working for an Islamist, Arabist, Anti-American, Radical News Network promoting the Muslim Agenda?

I have yet to kneel down and kiss the diamond-encrusted crescent ring of a foreign dignitary.

The elevators at our D.C. and NYC offices are not gushing out with ful and hummus.

The staff is not forced to read from right to left.

Recreation does not consist of smoking sheesha and playing the card game Tarneeb (although there’s nothing wrong with that, in my opinion).

Also, I anxiously await the Muslim Agenda email that still hasn’t come in my Outlook inbox. If it ever did, I’m sure it would talk about how to get extra parking spaces for mosques, best strategies in aligning shoes neatly outside South Asian homes, and finally figuring out how to make Muslim events start on time.

In all seriousness, these rumors are just that – rumors. The network is staffed by talented professionals who have not signed oaths on the Quran or pledged fealty to foreign constitutions, the Sharia or bearded political leaders.

"The Stream," in particular, is like the United Nations of journalistic awesomeness comprised of experienced journalists, researchers, digital experts and producers from diverse ethnic, religious and political backgrounds.  Our team is a reflection of the diversity of 21st century American communities.

Before believing some of these unsubstantiated fears, I request tuning in, giving us a try, and making up your own mind.

Have you read Glenn Greenwald’s Guardian piece on Al Jazeera America? Your thoughts?

I read Glenn Greenwald’s piece and his commentary on Al Jazeera journalist Marwan Bishara’s critical open letter to Al Jazeera executives.  I welcome the transparency and am glad people have an insight to the many internal conversations currently taking place. To me, it reflects the deep commitment and high standards folks have within this network to ensure Al Jazeera America emerges as a quality, hard-hitting news channel.  Passionate debates in pursuit of excellence usually lead to better results, and I’m all for it.

Now to answer some superficial questions

Are they buying you new clothes? Please say Yes. Please.

Much to the everlasting happiness of my wife, yes, they have hired stylists to do a full-on "Pretty Woman" makeover. I begged the network to continue letting me dress like a Karachi uncle from 1987 whose closet is populated by Dockers pants and Ross shirts, but oddly, they declined.

Are you getting a new haircut? Please say Yes. Please.

As an American of Pakistani descent, I am genetically pre-disposed to three things: 1) enjoying lamb biryani, 2) injecting melodrama in otherwise mellow situations, and 3) premature, hereditary balding. Anticipating the Great Follicle Exodus of 2014, I was afraid to develop an attachment to my Pak-Fro mane and made peace with it resembling Bollywood actor Jatinder’s hairdo. The network has hired a “hair stylist” to make me look hip and presentable. Good luck, stylist.

Did they hire you for your good looks?

What’s the worst that could happen?

Well, every single one of my potential, live-on-air failures in front of millions of critical, discerning viewers could be uploaded to YouTube and endlessly played on repeat for posterity resulting in my utter humiliation, thus forcing my future unborn children to grow up in shame and eventually change their last names to Jolie-Pitt. Other than that, nothing!

So, that’s it for now. I’ll continue writing articles and essays for Salon and other outlets, and I’ll be even more engaged on Twitter and Facebook.

We’re a new show on a brand new network trying to take our baby steps knowing full well people are expecting giant, awesome leaps. We’ll get there. There might be some bumps, falls, trips, hiccups, dead air and massive awkwardness along the way – and, honestly, that makes for great television, no? – but I assure you we’ll get there.

And if we at "The Stream" fail to deliver, call us out and help make us better. After all, you’re involved in the conversation.

See you in a month.