With virtually no police, crime or unemployment, meet the Spanish town described as a democratic, socialist utopia 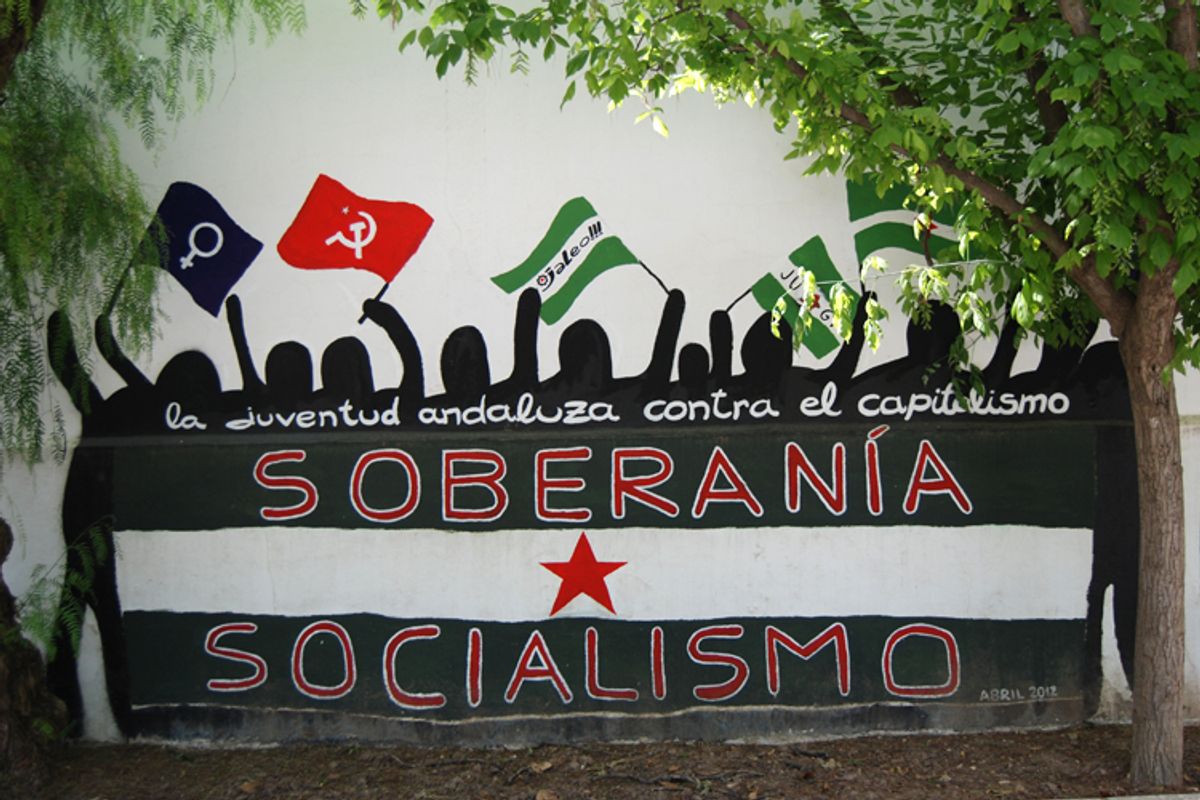 On the face of it, the Spanish town of Marinaleda is indistinguishable from any other in its region. Nestled in the picturesque Campiña valley, the surrounding countryside is made up of rolling green hills, miles of olive plantations and golden fields of wheat stretching as far as the eye can see. The town is pretty, tranquil and typical of those found in Andalusia, Spain's poorest and most southerly province.

Since the financial crisis began in 2008, Marinaleda has shot to fame -- and so has its maverick mayor Juan Manuel Sánchez Gordillo, who earned the nickname,"The Spanish Robin Hood,” after organizing and carrying out a series of supermarket raids in a direct action protest last August. Basic groceries such as oil, rice and beans were loaded into carts, wheeled from the store and taken to a local food bank to help the poor, as helpless cashiers looked on, some crying.

In an interview after the event, Gordillo, the democratically elected mayor since 1979, said it was not theft, but a non-violent act of disobedience.

“There are many families who can't afford to eat,” he argued. “In the 21st century this is an absolute disgrace. Food is a right, not something with which you speculate.”

Gordillo, who has political immunity from prosecution, is angry that supermarkets throw food away while millions go hungry, and also blames big supermarkets for the death of the small-scale farmer: “A product is sold to the consumer for 704 percent more than what the farmer is paid for it,” he points out.

Not your average-looking politician, Gordillo sports a bushy grey beard reminiscent of Fidel Castro and is rarely seen without a Palestinian scarf draped over his shoulders. A reluctant celebrity, in person he seems shrunken, skinnier and wearier than he did during last summer's supermarket invasions.

The Robin Hood raids were popular with many in Andalusia, a region where crippling austerity measures and huge job losses have hit the hardest.

In this province alone there are 690,000 empty properties due to bank foreclosures. But not in Marinaleda, because Gordillo has a solution: anyone who wants to build their own house can do so for free. Materials and qualified workmen are provided by the town hall, and the generous allowance of 192 square meters means the homes are spacious. Families then pay just 15 euros ($19) per month for the rest of their lives, with the agreement that the house cannot be sold for private gain.

“I think a home should be a right, not a business,” explains Gordillo, who received 73 percent of the votes in the last campaign and has beaten his opponents every four years for nine consecutive elections.

“This crisis started with the banks and real estate and we have to break that. Marinaleda has provided solutions to specific problems outside of capitalism, with a different economic model.”

In Andalusia, unemployment now stands at 37 percent (a staggering 55 percent for young people). But Marinaleda, population 2700, has virtually full employment through the town's farming cooperative, where laborers earn equal wages of 1200 euros ($1600) per month. Here, in a region where 1 in 3 people are unemployed, this achievement cannot be understated.

Marinaleda's situation is unique. While a framed portrait of Che Guevara hangs in Gordillo's office, there is no communist party in Spanish politics. The mayor calls himself a libertarian and has implemented his ideals as a representative of the Izquierda Unida (United Left) party, holding a seat in the regional government. Officially, the town identifies as a social-democratic "free town" built on cooperative principles.

Streets and squares are named after Latin American revolutionaries, and a large portrait of Jacque Fresco, the futurist and visionary of the Venus Project, adorns the town hall. Several times a year people gather to do voluntary work in the community. These “Red Sundays” are spent planting trees, making repairs or farming.

Gordillo believes these initiatives empower the people, creating a strong sense of solidarity and a refreshingly tight-knit community where people look out for one another. This is reflected in the crime rate, which is virtually nonexistent. A town this size should have between four and seven police officers, but Gordillo has abolished them with positive results. “We don't want police here,” he states bluntly.

Like all Spanish municipalities, Marinaleda receives cash injections from its regional government. But here these grants are used to benefit the people directly, and weekly assemblies are held to give everyone a voice on how the money is spent. As a result the town boasts its own TV channel, a swimming pool, theater, kindergarten and a sports complex amongst other things, all of which are free to the public.

Gordillo was born in Marinaleda in 1952. At that time in Spain, under the suffocating oppression of Franco's dictatorship, life was comparable to that during America's Great Depression.

Many families fled Spain to make new lives abroad. For those who stayed, survival was a daily struggle: thousands of landless farmworkers were forced to leave their families for months at a time in the search for work. Seeing this, the young Gordillo became politicized. He points out that like in Latin America, even today two percent of the elite own fifty percent of all arable land in Andalusia.

Franco's death in 1975 heralded the birth of democracy, and in Marinaleda the townspeople used this new freedom to fight for their rights to work the disused fields of the aristocracy. A farmworkers' union and the direct democracy meetings were launched and the fight for land and work began, through occupation of a vast surrounding estate belonging to the Duke of Infantil.

Each time the police came to evict and arrest the union members, they returned stronger, marching 300 miles north to Madrid, breaking into and closing down major airports, organizing roadblocks and even going on a “hunger strike against hunger.” Gordillo, who has been to prison seven times and survived two assassination attempts from right-wing extremists, won a major victory in 1992, when Marinaleda was finally awarded 1200 hectares of land.

Last year the radical unionist took the fight cross-country, marching across the region to rally other mayors to his cause, and in July he and other union members started to occupy a disused military base near the town, arguing they could use the ministry of defense land to grow food. But while Gordillo is a hero to many, he is rapidly gaining enemies.

Last month, the Spanish high court announced legal action against the mayor and 53 others for their occupation  and in the same week right-wing newspaper La Razon launched a smear campaign attempting to expose Gordillo as a charlatan and hypocrite for accepting his legal salary as a politician. Gordillo denies any wrongdoing, claiming he earns the same as other unionists and donates the rest to charity.

When the same newspaper began hounding Gordillo's family and friends to dish the dirt on him recently, they were forced to admit it's difficult to find people with a bad word to say about the mayor.

Chatting to Marinaleda locals, I got the same impression. “He's a man of his word,” said one man, while another villager described Gordillo as “honest and trustworthy.”

Whatever the truth, Gordillo and Marinaleda have become iconic figureheads of a fairer, more equal society. Forget the imposed communism of Cuba, China or Stalinist Russia. The secret ingredient to Marinaleda's success is direct democracy, which empowers rather than oppresses.

“We need to rethink our values, the consumer society, the value we place on money, selfishness and individualism,” Gordillo remarks. “Marinaleda is a small example, and we want this experience to extend throughout the world.”

Sophie McAdam writes about society and other topics at http://sophielmcadam.wordpress.com.