I forgave my husband for cheating

Like Huma Abedin, I know what it's like to be married to a man who betrays you repeatedly – and to decide to stay 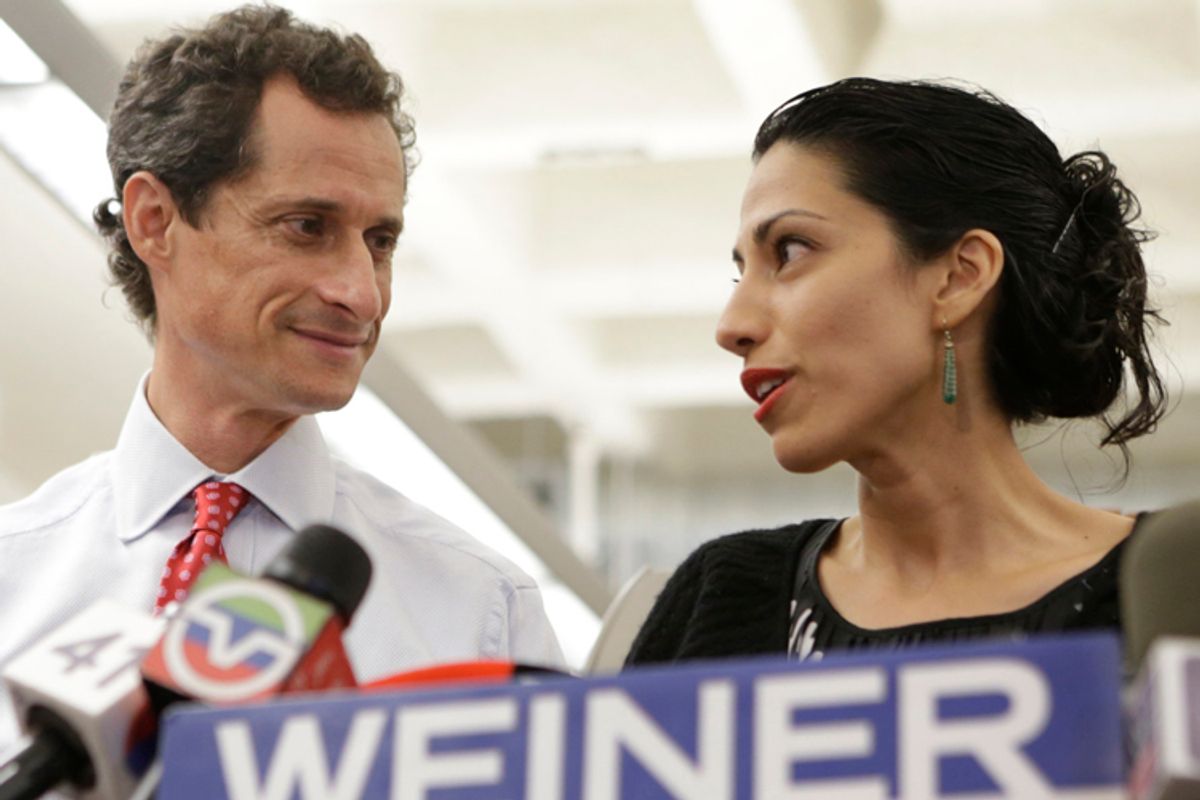 When I found out about my husband’s affair, I thought the worst was over. For six months, I had cried and raged, but I was finally starting to feel a glimmer of hope. And that’s when he made an off-handed remark about visiting a strip club.

I took off my wedding ring, put it on the table between us and told him calmly and quietly, “You are going to tell me everything.”

Not only was there the one affair. There were dozens of “encounters.” He was, he told me, a sex addict.

It’s a good thing my husband isn’t in politics. If he were, I might have found myself in Huma Abedin’s shoes. The wife of NYC mayoral contender Anthony Weiner is being scrutinized for her decision to stick with her husband through his sexting scandal. But I was lucky, because I was able to make my decision privately, able to deflect a widespread consensus that any wife should leave her cheating scumbag of a husband.

Like Abedin, I married a cheater. And so far, I’ve determined to stay.

No one is more surprised at this decision than I. Cheating was a deal breaker, I said more than once. And yes, I would have felt a self-righteous satisfaction in kicking him out. In watching him struggle to cling to everything that mattered to him – me, our kids, his reputation, his career. Serves the cheating bastard right. Right?

But the satisfaction would be short-lived. And, I believe, would have been replaced with a sense of dissatisfaction. There could be no delight in hurting my children’s father. Or my best friend.

Besides, I made my vows. And I meant them. Even if he had his fingers crossed behind his back when he took his. (His sexual acting-out pre-dated our wedding and, for that matter, our relationship.)

I married him, because I loved him. Because I saw something in him of value. Over the years, I was often exasperated at his physical absences. His emotional retreat. I had begged and pleaded for him to spend more time with me and our growing family. He was working more and talking less. I was talking less and crying more. We both slinked away to our corners.

I reached a point where I wondered if we’d both be better off apart. I became increasingly attracted to a male friend, a feeling I recognized as dangerous for my marriage. I didn’t want to feel this way. I told my husband.

We began marriage counseling, ostensibly to remedy the distance in our marriage. Just two weeks later, with my husband away on business, I somehow “knew” that he was having an affair.

It’s hard to explain that sense of suddenly knowing something you’ve likely known for months. I confronted him. He denied. I didn’t back down and over hours the truth – or part of it – came out. Yes, he was having an affair, but it was me he loved. Me he wanted.

To say I was devastated is to understate my total collapse. While I managed to feed kids and fake-smile at friends, I felt myself dying inside. Why? I kept demanding. It didn’t make sense to me. At all. He hated the woman he was sleeping with, a woman he’d worked with for years. She had made his life miserable.

He wept. He begged. He vowed to be a better man, a better husband. I didn’t want to forgive him, but I tried my best. We struggled. We talked. I begged him to explain why. And why her?

Six months later, he confessed. Everything.

Sex is fast becoming the addiction du jour, which makes it a prime target for the public’s derision. Many chalk it up to a convenient excuse for cads who get caught. It’s a punchline. An enviable addiction.

Unless, of course, you’ve seen it up close.

Up close, it looks like pretty much any other addiction I’ve seen. Messy people avoiding pain. There are, inevitably, the usual suspects that also surround other excesses: self-loathing, shame, false arrogance, a deluded sense of immortality.

Sex addiction isn’t about love. Or even, really, sex. It’s about avoiding intimacy. And pain. It’s about unhealthy ways of coping, ways that often develop during adolescence in response to abuse or neglect. Sex, even alone, feels good. It offers escape, at least for the moment. A distraction from feelings that, for some, are overwhelming: loneliness, fear, anxiety, even boredom.

When my husband told me about his affairs, his addiction, I told him that I could promise him nothing except that I would be his friend. He was already in treatment, he told me, as he lay curled in the fetal position on the floor, sobbing with the pain of what he’d done to me, to our family, to himself. The idea of kicking him out – though he expected it – seemed unbearably cruel. And so I repeated that I would be his friend, as I had been for the 12 previous years of our relationship.

But my outer Dalai Lama soon gave way to my inner Lorena Bobbitt. I called him horrible, unpublishable names. I fantasized about smothering him when he was asleep. And, while I didn’t attack him with a golf club or dismember his member, I did destroy his beloved watch. And a television set. Never have I felt such rage.

I put my ring away. Banished our wedding album to the basement. I. Was. Not. Married. I insisted through gritted teeth. I. Never. Was. Though I couldn’t convince the Catholic church to agree with me.

My husband was there for it all. He was sorry, so very very sorry, he told me, as often as I needed to hear it.
In the meantime, he went to his 12-step group. Talked to his therapist. Tried to understand what drove him to behavior that had become disgusting even to him.

I grilled him when insecurities surfaced. Had access to all e-mail accounts. We both recognized that relapse was possible but, thankfully, it didn’t happen. Like many recovering addicts, he had a plan should he feel himself slipping.

Eventually, I was able to look around at the fragments of my marriage and decide that, as shattered as it was, I still wanted it. And him. Especially, surprisingly, him.

We began the slow task of not so much putting it back together as rebuilding it. We kept the parts that worked – our senses of humor, our intense love for our children, our genuine caring about each other – and built in those parts that we wished had been there before. Like “honesty,” I suggested. And “not having sex with people who aren’t me.”

That was six years ago. We continue to work on us, though as most happily married people tell us, that’s an endless task.

There are a lot of us in this situation. And I would bet not a single one of us ever said that if our husbands cheated on us, we’d be OK with that. We insisted it was a deal breaker. Yet here we are. Many, some studies even say most, of us trying again.

Opinion is frequently merciless to those trying again publicly. Betrayed wives who stay are treated with scorn and dismissed as doormats. If they’re attractive, they must have been lousy in bed. If they’re not, well, then, what did they expect?

Yet those I know – and I know many – walk this path with as much dignity as we can. We make decisions based on the best we can do in the moment.

I’m grateful that I was able to walk my path without public judgment, though a few hurtful comments by friends have made me careful about whom I tell. I’m grateful my kids know their father as a good husband and a great dad. We talk often about how all of us will make mistakes, but the smart among us learn from them. And I’m grateful that my husband, blessedly, is not a politician.

Elle is the pen name of a journalist, author and creator of the blog, Betrayed Wives Club.